On 21 October 1805, William Holburne, one of Bath’s greatest benefactors, was an 11-year old Midshipman on board HMS Orion, which was about to join battle with the French Fleet off Cape Trafalgar.

As Holburne’s ship closed with the enemy battleship, Intrepide, his Admiral’s wife, Frances, Viscountess Nelson and Duchess of Bronté, was on holiday in Bath, doing her best to avoid the pitying stares of Bath’s fashionable society, all of whom knew that, since 1798, her husband had been keeping his feet (and his other remaining body parts) warm on the voluptuous form of Emma, Lady Hamilton, wife of the British Minister at the Bourbon Court of King Ferdinand of Naples and Sicily. 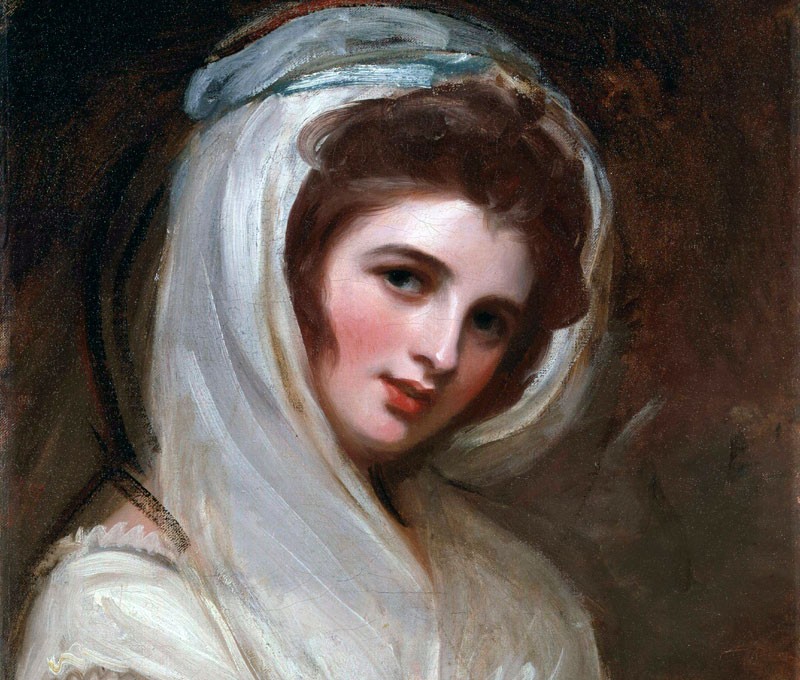 Since 1781, the Nelsons had been frequent visitors to Bath starting when, accompanied by his father, the Reverend Edmund Nelson, the partially paralysed Horatio had boarded at the house of the apothecary, Joseph Spry, at 2 Pierrepont Street. It was from this address, now marked with a bronze plaque, that Nelson junior took the cure to help with his recovery from the malaria he had contracted on active service in Nicaragua the previous year. The upwardly-mobile sailor accompanied by his new bride, Frances, stayed with Spry again in 1788, while on a holiday to meet Fanny’s relations in Bristol, and returned once more in 1797, by which time the apothecary had moved to Argyle Buildings. On this occasion, Nelson was hoping that the waters would ease the pain of the stump of his right arm, which he had lost at the Battle of Santa Cruz de Tenerife.

The last time that the Nelsons visited Bath as a couple was in early 1798, this time to attend to the Reverend Edmund who had taken to wintering at 9 Pierrepont Street. The, by now, one-armed and one-eyed sailor, who started his affair with Lady Hamilton shortly after his victory at the Battle of the Nile later that year, never set foot in the city again. But, on and off until 1815, his wife Frances continued to spend time in Bath, caring for Nelson’s elderly father after the breakdown of her marriage until the man’s death in 1802, and it was in the city that she learned of the news of her husband’s victory at Trafalgar and her new status as a naval widow. 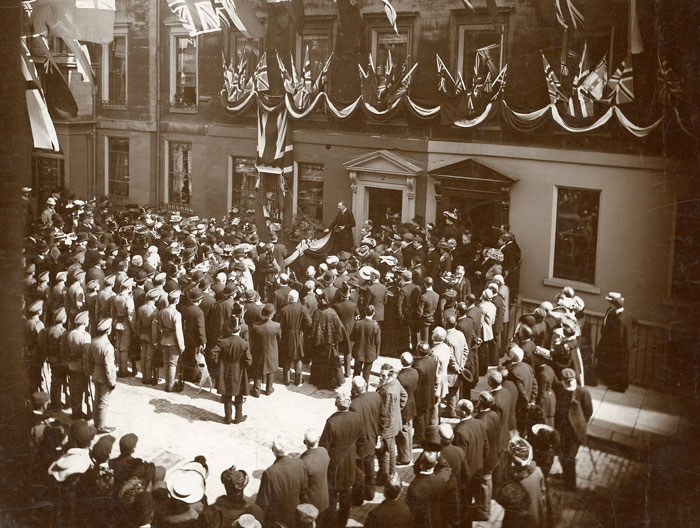 Crowds gathering in Pierrepont Street, Bath for the unveiling of a plaque in 1900 to mark the house where Nelson recuperated. The tablets can still be seen today. Picture courtesy of @BathinTime

The story of Nelson’s death at Trafalgar is something that every schoolboy and girl used to be taught. As he laying dying below decks on the Victory, surrounded by his loyal crew, he famously said: “Kiss me Hardy” and among his last utterances was: “Thank God I have done my duty.” News of his death spread like wildfire through England, reaching Penzance first, where the mayor of the Cornish town broke the news to townspeople from the balcony of the Union Hotel. Couriers carrying messages from the victory against the French, and the names of those killed, hurried from Falmouth to the Admiralty in London – now known as the 300-mile Trafalgar Way and marked in 2005 with a series of commemorative plaques along the route.

“Her husband had been keeping his feet (and his other remaining body parts) warm on the voluptous form of Emma, Lady Hamilton”

Although there is no evidence that Sir William Holburne ever met the Nelsons, there is a connection between the future philanthropist and England’s most famous sailor: a small wooden snuff box currently residing in a display case at the Holburne Museum.

Bath is a city remarkably uncluttered with the memorabilia of war. Its souvenirs of the Crimean War, a pair of large Russian cannons, were taken away in 1941 for conversion into munitions to drop on the Germans, whose retaliation in 1942 echoed down the years when a 500lb Luftwaffe bomb was found in 2016 in the grounds of Mary Berry’s alma mater at Hope House, Lansdown. But, like the Russian guns removed from the Royal Victoria Park in 1941, the bomb was taken away and destroyed, leaving Bath once again unencumbered with the material of war – providing one overlooks the Holburne’s wooden snuff box. 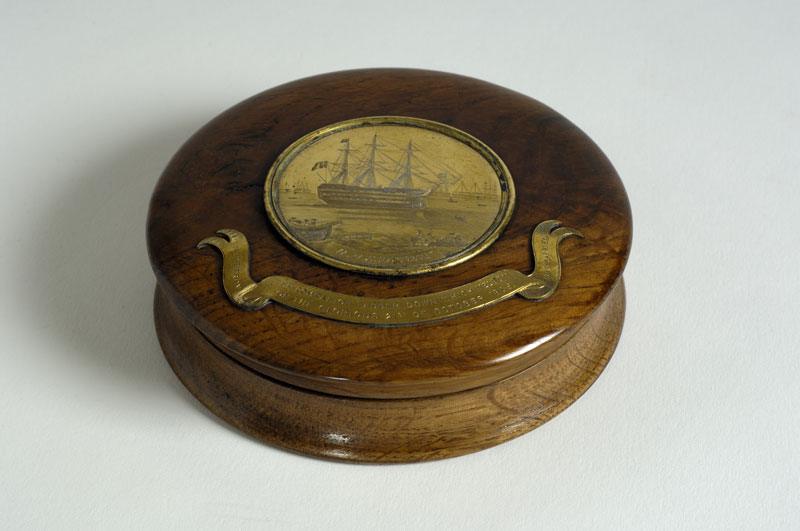 The HMS Victory snuffbox in the Holburne Museum, dated from around 1820. It’s inscribed: made from the companion ladder down which Nelson was carried on the glorious 21st October 1805.

According to the inscription on a gilt metal plaque on the lid, the box was made from an oak companion ladder on HMS Victory down which the mortally wounded Vice Admiral was carried at the height of the Battle of Trafalgar. While there is no reason to doubt the authenticity of the snuff box’s provenance, there are almost as many relics of Nelson’s flagship at the Battle of Trafalgar as there are hooves of Napoleon’s charger at Waterloo and surviving fragments of the True Cross.

Indeed, it is a wonder that the famous 104-gun, First Rate Ship-of-the-Line, which has been in a dry dock in Portsmouth harbour since 1922, has any original fittings left after the depredations of the French, termites, barnacles and souvenir hunters. Even Victory’s White Ensign, which was flown during the battle in 1805 and which covered Nelson’s coffin at his state funeral, did not survive the trophy hunters: it was torn to shreds by the Royal Navy bearer party, who – it is alleged – had previously consumed the spiced brandy from the barrel in which the Admiral’s body had been pickled after his death.

How or why the snuff box was acquired by Sir William Holburne is not known, beyond the assumption that he wanted it as a souvenir not only of the battle in which he had fought, but also as a memento mori of his late Commander-in-Chief. However, while Holburne’s legacy is omni-present in Bath, but largely unknown outside, the reverse is true of Nelson whose presence in the city is limited to the Holburne Museum’s snuff box, the brass plaque at 2 Pierrepont Street, and several buildings of varying age and quality, the very best of which are the magnificent early-19th century Nelson Place West, Nile Street and Norfolk Crescent named, respectively and in commemoration, after the late Admiral, his first great victory over the French and his home county.

On a footnote, sadly for Bath’s romantics and lovers of urban myths, the so-called Trafalgar iron balconies to be found on many buildings in the city are named after the architectural features on the houses which originally surrounded Trafalgar Square, not after the battle itself. HMS Victory in Portsmouth is now a tourist attraction

Christopher Joll is a Bath resident and a former officer in The Life Guards turned author of military historical fact and fiction who also writes, directs and produces military theatrical events for armed services charities. Recently appointed Regimental Historian of the Household Cavalry, he wrote Uniquely British: A Year in the Life of the Household Cavalry, published in 2012. He is also the author of the popular military-history action-adventure series, The Speedicut Papers. This article is adapted from a story about Nelsonian memorabilia to be published in 2018 in The Spoils of War: Treasures, Trophies and Trivia of the British Empire.

The author is grateful to the Nelson Society and The Holburne Museum, Bath, for assistance with this article.