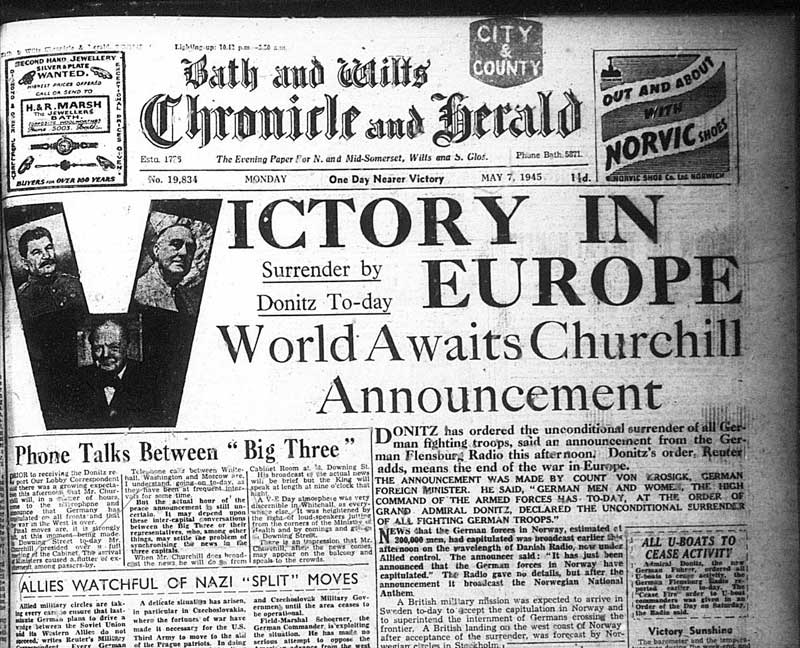 The wartime and the subsequent peacetime link between Bath and one of its twin cities, Alkmaar in the Netherlands, is taken up in a fascinating new book, The Remarkable Journey of Mr Prins by Aletta Stevens, which is as much a local tale as a European one, says Simon Horsford

Aletta Stevens’ vivid narrative takes in the invasion of the Netherlands by the Germans in 1940 and the story of Eli Prins, a poet, playwright and theatre producer, who in the late 1930s used his work to help set up an underground network to bring Jews and anti-Nazis to safety in the Netherlands. The book continues with Prins’ escape to England (he was high on a wanted list by the Nazis) in May 1940 and his talk to the Rotary Club of Bath later that year that led to the city ‘adopting’ Alkmaar – raising money and donating clothing – and eventually twinning with the Dutch city.
One section, on the VE Day celebrations in Bath. is particularly resonant and pertinent. This is an extract from that chapter.

‘Victory in Europe: World Awaits Churchill Announcement’, the front page of the Bath and Wilts Chronicle and Herald of 7 May 1945 declared. News of the liberation of the Netherlands had reached Bath, but the city itself was still waiting to hear the date for its own celebrations.

Meanwhile, the 300 evacuees in the city were told they could go home to London. For some of the 100 unaccompanied children this was not possible, either because their parents were not in a position to receive them yet, or because the parents could not be traced.

The Ministry of Food issued suggestions to grocers, dairymen and bakers, for the management of food supplies and shop opening times on VE Day. Restaurants and cafés were expected to be open, despite it being a national holiday.

When the unconditional surrender of Germany’s Armed Forces was finally announced, copies of the Bath and Wilts Chronicle and Herald ‘sold like wildfire’. In Westgate Street, newspaper boys were heard shouting ‘Victory paper!’ instead of the usual ‘War news, latest’. Many civil servants went to the station to catch a train home to London. There was a run on cigarettes and some tobacconists ran out of supplies. Some Bathonians could not wait until the actual day and started celebrating the afternoon before. Flags were hung from windows and across streets. Boys began building a huge bonfire in the grounds of Prior Park College. One citizen said: ‘…there is the joyful realisation that never again, we hope, shall we hear the sirens’.

Tuesday 8 May 1945: VE Day. At midday, the Mayor, aldermen and councillors gathered outside the Guildhall and walked in procession to the Abbey for a special thanksgiving service, conducted by the Archdeacon of Bath. At 3pm Prime Minister Winston Churchill spoke to the nation from the War Cabinet Office. In Bath, the VE broadcast was relayed at the Beau Nash Cinema. In the evening, there was a thanksgiving service at the Abbey. Such a large crowd turned up that many had to stand outside in Abbey Church Yard to listen to the service relayed through loudspeakers.

The city was looking suitably festive, with bunting strung across the streets and houses bedecked with flags. Street parties were held at long, continuous tables, set with white tablecloths, vases of flowers and plates piled high with biscuits for tea.

George Cantello travelled back to Bath for the VE Day weekend. He had sustained a serious arm injury whilst fighting in Normandy, and had been convalescing at Combe House in Gittisham, near Exeter in Devon. This Elizabethan country manor, furnished in a grand 18th-century style, with a chaise longue in the hall and deer heads on the walls, accommodated some 50 casualties from around the world, including Burma. All had suffered nerve damage which was either inoperable or required postoperative, long-term care. George had had shrapnel removed from his arm, but the nerves needed a long time to grow together again. After several months’ convalescing, the ring finger and little finger of his left arm remained permanently damaged, but fortunately he was well enough to travel home to his family and take part in a street party.

Eleven-year-old Michael Rose, now at Hinton School, joined in the village parties in the main street of Hinton Charterhouse. There were dances in the village hall and a special service in the local church. In the words of the Bath and Wilts Chronicle and Herald, “Great relief was felt that all the bombing and fighting was over.”

Many of the surrounding villages had similar celebrations. Games were organised for the children, and there were parades and many entertainments. Theatres and cinemas were open, band music was played at Parade Gardens, and at Sydney Gardens there was dancing on the lawn to a radiogram.

As darkness fell, bonfires were lit across the city, with effigies of Hitler being taken ‘to the stake’ by the crowd. Floodlit buildings, including Sham Castle, the Great West Door of Bath Abbey, Pulteney Bridge and St. Stephen’s Church, provided illumination. At Queen Square, the Mayor, Councillor Edgar Clements, addressed a large crowd and complimented the city: ‘Bath has behaved splendidly’.

As darkness fell, bonfires were lit across the city, with effigies of Hitler being taken ‘to the stake’ by the crowd.

In front of the British Legion’s headquarters, children danced to live piano music with vocal accompaniment. There were fireworks and fancy dress processions, and impromptu singing, dancing and marching late into the night. At Old Bond Street Place: “… a great shout of disappointment went up from the tightly packed crowd as the six gas-burning flares went out at 12. A hush descended on the crowd as the gas flares died down. It was as if the crowd was waiting for someone to make a speech. Then someone started to sing Land of Hope and Glory, and in an instant the whole concourse had joined in. It was an unforgettable scene, that great throng singing in the darkness. Milsom Street stretched shadowy and ghostlike, with its flags and bunting, behind them, and the traffic lights blinked from green to red and back again.” (Bath and Wilts Chronicle and Herald, 10 May 1945).

It was an unforgettable scene, that great throng singing in the darkness. Milsom Street stretched shadowy and ghostlike, with its flags and bunting, behind them, and the traffic lights blinked from green to red and back again.”

At the end of VE Week, Bath’s festivities were concluded with a Peace Parade passing through Grand Parade into North Parade en route to the Recreation Ground for Sunday’s Thanksgiving service.

The Remarkable Journey of Mr Prins: WWII, Jewish Refugees and the Bath-Alkmaar Friendship by Aletta Stevens is published by Brown Dog Books, £15. Signed copies are available from the author’s website: alettastevens.co.uk