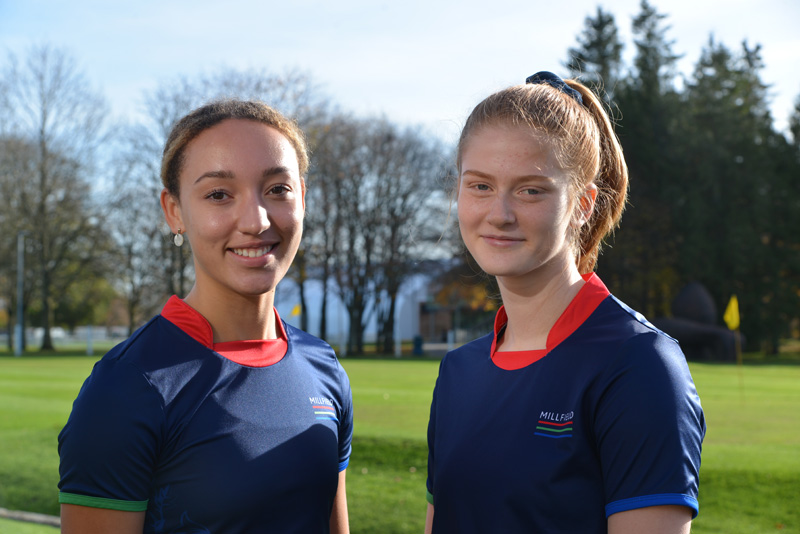 Two Millfield netballers have been selected to trial for the England Netball U17 team for the 2020/21 season.

Lower Sixth Bella Valeur Adu and Sophie Hamilton have been nominated to trial for a space on the prestigious Roses side. Both girls are highly regarded netball scholars and are part of the first team squad at Millfield. They both train and play for Team Bath who nominated them for the trial, which is currently scheduled for 20th December.

Sophie, who joined Millfield in Year 9 to support her sporting and academic endeavours, started at county level playing in the Severn Stars age groups before moving to Team Bath. Sophie was selected for the Team Bath U19 NPL squad last season whilst also being a part of the Team Bath ADC held at Millfield. A strong academic, Sophie is studying A levels in Chemistry, Maths and PE and hopes to pursue netball professionally in the England senior team and play in the superleague.

Bella started boarding this September and has risen through the netball pathway in Jersey, representing Team Jets throughout the age groups and at senior level. She was selected into the Team Bath U15 squad before progressing into the U17 NPL squad last season. Bella also attends the Team Bath ADC, balancing her sporting commitments alongside A levels in Maths, Chemistry and Biology. She hopes to go to university to study a science course whilst continuing netball professionally.

Director of Netball, Jenna Adamson says “I am thrilled that Sophie and Bella have this opportunity to trial for England and showcase their talents. They are both extremely hard working and dedicated athletes. I wish them all the very best at trials.”

The girls are following in the footsteps of Old Millfieldian and previous England Netball captain, Pamela Cookey. Pamela boarded at Millfield from 2001-2003 and made her senior debut for England in 2004 against Australia, later winning a bronze medal at the 2006 and 2010 Commonwealth Games and a silver medal at the World Netball Series.