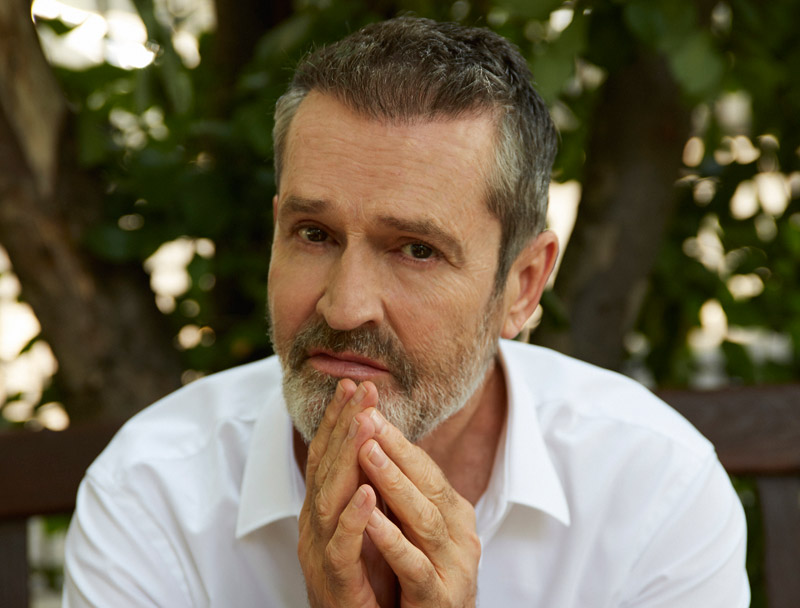 We reminisce about the time Rupert Everett graced our Theatre Royal Bath’s stage in the production of Uncle Vanya. Melissa Blease spoke to Rupert just before the production – in which he both directed and starred – came to Bath last year.

Those of us of a certain, erm, vintage have grown up with Rupert Everett. It goes right back to the moment he first trod the boards as floppy-fringed toff Guy Bennett (aka a thinly disguised Guy Burgess) in Another Country 38 years ago. This was a role that he repeated, alongside Colin Firth, in the 1984 film version for which he earned a BAFTA nomination for Best Newcomer To Film.

He’s also an erudite writer, an enthralling raconteur, a charismatic cultural chameleon – and, for many girls and boys who grew up in the 1980s, our first celebrity crush. “Really, darling?” he purrs, in familiar, resonant tones that instantly put you in mind of Blithe Spirit’s louche, suave Charles, or Julianne Potter’s charming best friend George Downes, or Prince Charming in Shrek 2 (for yes, that was Rupert too); “Oh, how very flattering!” Oh Rupert, you must have been the recipient of far more flattering compliments than my sycophantic schoolgirl silliness? “I guess so,” he admits; “but I reckon I wasn’t a bad choice of first crush to have, you clever girl!”

Mutual admiration moment over, we eventually get around to putting the meat on the bones of the reason for our chat. This month, Rupert puts himself in a double-spotlight at Theatre Royal Bath, when he both directs a brand new production of Anton Chekhov’s Uncle Vanya, and stars in the title role.

“It’s a huge challenge, but I’m very, very excited about it,” he says. “I was offered this wonderful opportunity by TRB director Danny Moar and Jonathan Church (the theatre’s summer season director), for which I am exceedingly grateful. I’ve got an amazing cast to work with, and the opportunity to work in an incredible theatre which holds a lot of personal history for me. I was great friends with Jeremy Fry (who was largely responsible for Theatre Royal Bath’s contemporary career) and also Jeremy’s boyfriend at the time, Robert Carson, who did lots of the decoration. And of course I’ve acted on that stage before when I did The Judas Kiss with Freddie Fox back in 2012.”

“Uncle Vanya is all about how people feel when they’re stuck; it’s full of an amazing range of human emotion, making it incredibly joyful one minute and incredibly mournful the next…”

Ah, all manner of strands are coming together now. The Judas Kiss focuses on the Oscar Wilde ‘scandal’ and disgrace at the hands of his young lover Bosie (Lord Alfred Douglas). He had long since harboured a deep fascination with the flamboyant, sparklingly witty writer’s life since his mother read him Wilde’s children’s story The Happy Prince as a child. So in 2013, Rupert began working on (and raising funds for) a film that pays tender, nuanced tribute to the enduringly fascinating, charismatic man, set at the close of the 19th century and chronicling Wilde’s last dramatic days. The film, named after Wilde’s esoteric fairy tale, was released to great acclaim last year – with Rupert as Oscar himself. You may recall that he visited Bath’s Little Theatre Cinema to host a Q&A at a special screening of the work that he described as a ‘passion project’ last year.

Bringing this thematic circle to a nice, neat close, The Judas Kiss – back where we began – was written by David Hare, who is also responsible for the adaptation of Uncle Vanya that’s set to open in Bath.

“David has done a magnificent job,” says Rupert. “To be directing this as my first play is one of the proudest moments of my whole career, second only to the immense pride and joy I felt when The Happy Prince finally came out.” And as we’ve established, Rupert has a huge back catalogue of achievements to consider.

“My life to date could in a way be described as a bit of a roller-coaster ride,” he says, almost ruefully. “It’s dawned on me lately that my career has spanned a long period of time – which is probably due to the fact that I turned 60 last week; gosh, that suddenly crept up on me! Time seems to be moving very quickly now; all of a sudden, the 1970s and 80s of the last century feel as far away as the 18th or 19th centuries – the world has so changed so much. But then again, getting older, for me, so far, is really exciting because the breadth of that span of time is fascinating to have lived through.”

“Youth is one of the main thrusts that drives show business forward; it’s always been a young industry, but now it’s really young, for men and women”

But surely, these days, 60 is the new 40: a time of renaissance, and fresh perspective? “In one sense, perhaps,” says Rupert. “Or at least, we can tell ourselves that. But the fact is, there’s still a vast imbalance between young and the age people perceive as old. Our generation was fairly disrespectful to old people when we were young, even if we didn’t realise it, and I suppose that was the beginning of how things are today – and my business, show business, is pretty bloody ageist. Youth is one of the main thrusts that drives show business forward; it’s always been a young industry, but now it’s really young, for men and women.”

Oh dear; following our frisky opening exchange, are Rupert and I getting a bit wistful? “No!”, he insists. “We have plenty of reasons to be cheerful – let’s celebrate them instead!” But eek, my next question is about Chekhov – who, alongside Henrik Ibsen and August Strindberg, is considered to be one of the three seminal figures in the birth of early modernism in the theatre. Surely we’re on heavy-going territory again?

“To be directing this as my first play is one of the proudest moments of my whole career, second only to the immense pride and joy I felt when The Happy Prince finally came out…”

“Absolutely not,” says Rupert. “Chekhov is actually very funny. Somehow, in our interpretation of his work over the years, he’s been misinterpreted; we’ve become too serious and reverential with him. He’s basically a realist, so his plays are like looking through a keyhole into the specific place and period he wrote about, in this instance late 19th-century Russia. When audiences first saw Uncle Vanya back in the day, they would have all known people trapped in that vast country, with the nearest train track 50 miles away, in a world where there was no sound: no television, no radio, hardly any electricity.

“Uncle Vanya is all about how people feel when they’re stuck; it’s full of an amazing range of human emotion, making it incredibly joyful one minute and incredibly mournful the next, with a lot of comedy in there too. It’s most certainly not any kind of rarified play – a classic, yes, but accessible to everybody.”

And if any director is going to introduce Uncle Vanya to audiences who may not feel that 19th-century Russia is accessible to their own personal sensibilities, it’s Rupert. “I’ve had a long relationship and fascination with Russia for many, many years,” he says. “In one of the weird, strange, up-and-down twists of my career, I spent almost two years in a little town just south of Veronezh, just before the Steppe. I was working on a TV series with the Soviet director Sergei Fedorovich Bondarchuk; it was a life-changing time for me, and it really started me thinking a lot more about Chekhov. He was writing in the last 20 years before revolution completely wiped the world that he describes so well off the face of the earth forever – and that, for me, makes his work very moving as well.

“The strange thing is, there are two characters in Uncle Vanya who are almost like seers – it’s as if Chekhov knew what was about to happen, in his world, so that makes it incredibly romantic, and nostalgic too.

“Okay, so I’ve never directed a play before and one never knows how these things are going to pan out. But I’m hoping to create a wonderful evening in the theatre – what more can you do? Or aspire to do, anyway.”

Ah, Rupert; something tells me that you’re just the man for the job. My first crush has done good.