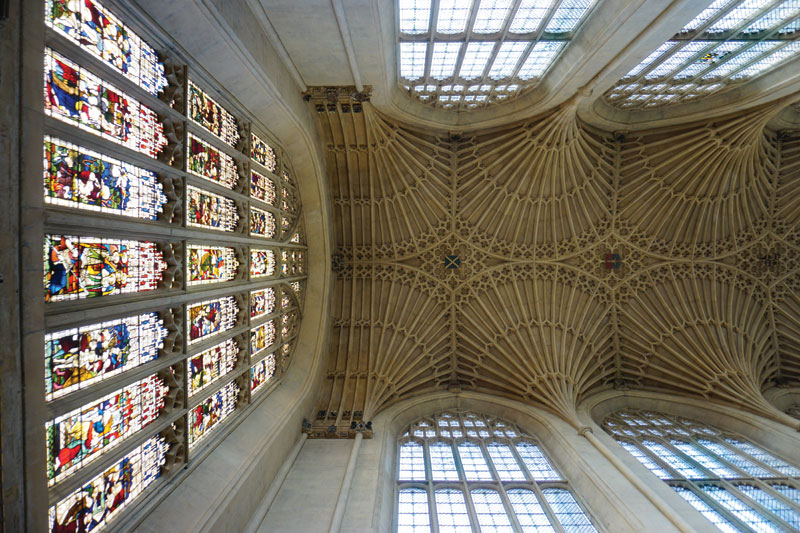 Light in the darkness: a guided tour of Bath Abbey

A rebellious baker, 7,000 toothbrushes, and a giant inflatable moon: Daisy Game takes a guided tour of Bath Abbey, and finds out how these three unlikely subjects are connected by one of Bath’s oldest attractions.

It’s a mild December afternoon, and Bath Abbey hums with the chatter of an inquisitive Christmas crowd. Religious spaces of the Abbey’s scale and age can sometimes feel a little cavernous: voices are lowered and footsteps softened as visitors explore with a hushed reverence. But Bath Abbey is bright, warm, and alive: among the map-clutching travellers and Christmas-shopping-laden locals, I take a moment to spot the person I am here to meet.

When I do identify my guide – Sarah-Jane – she begins by asking how much I already know about the building’s history, keen to ensure that my tour fits to size. Fortunately, I’m a complete novice, leaving her free to wax lyrical. “This isn’t really on the tour”, my guide pauses at one point to tell me, before gesturing toward a small chantry chapel of which she is particularly fond. Tracing her fingers over the stone entrance, Sarah-Jane tells me that she likes to draw attention to the chapel for no other reason than because she finds its intricate carvings “rather lovely”.

Aside from this impromptu break, the tour is organised and logical: we move clockwise around the Abbey, and chronologically through history. I’m told that the 500 year old building in which we stand is a Tudor build, but that before the Abbey a Norman Cathedral stood in its place and prior to that, a Saxon church. The Abbey has displayed a flexible, can-do attitude through the years, with many demands – religious and otherwise – made of it. During the English Civil War, the building acted as a hospital for both Royalist and Parliamentary soldiers; cut forward a few hundred years to Georgian England, and the Abbey’s northern flank became a busy, shop lined thoroughfare via which locals could travel quickly from one side of Bath to the other. For a short while, the Abbey was even used as a make-shift garage: sheltering Bath’s fire-engine beneath its fan vaulted ceiling. The building, Sarah-Jane muses, has always been “part of the fabric of Bath”. There is certainly a patchwork quality to the Abbey’s history: a sense that the seams of its various identities have been tucked and stitched together so as to create one large, multi-textured throw.

To this day, the Abbey plays an active role within the Bath community – in both a religious and a secular sense. Hanging from the ceiling on the day I visit is Luke Jerram’s Museum of the Moon installation, which transforms the Abbey into a lunar museum of sorts. I’m also told that, as the parish church for the centre of Bath, 1,000 religious services take place here each year. “Sometimes people forget – they think it’s a historic site – that it’s a fully operating church”, Sarah-Jane observes.

Recently, an effort been made to ensure that the way in which the Abbey is maintained moves with the times too. The Footprint Project of 2018 saw the installation of an environmentally friendly underfloor heating system which, using heat energy from the Roman Baths and the hot springs which supply them, has successfully reduced the Abbey’s carbon footprint by 50%. As well as enabling the Abbey to make steps towards a more eco-conscious future, The Footprint Project uncovered (quite literally) some rather gruesome history: beneath the building’s stone floor lie no fewer than 7,000 bodies, the burials of which began in the 1750s. My squirming response to this stat – eyes wide, hand to mouth – encourages my guide to up the ante; she tells me that in one Tripadvisor-style guide to Bath from the Georgian period, the reader is warned that upon entering the Abbey, they would be met with “a stench scarce to be imagined”.

The tour is filled with lively stories like this: I’m told about Richard Druce, the rebellious baker with Parliamentary sympathies who refused to fire up the ovens when the Royalist troops used the Abbey as a base, and about the 7,000 toothbrushes and several years in the late 1990s it took to brush the building’s interior clean of its candle and gas-lighting applied grime. So while the tour is peppered with a generous helping of dates and names for anyone interested in such detail, history is also made tangible and vivid.

Sarah-Jane is equally keen to discuss the darker stories with which the Abbey is associated. We spend some time looking at the memorial of William Baker: a man whose stone plaque celebrates him as one who “helped to make the country great” ­– but which neglects to mention that Baker’s wealth can be traced directly back to the plantations of Barbados and the Carolinas. Bath Abbey, I’m reassured to hear, is making a conscious effort to acknowledge and actively educate visitors about its chequered history.

As we come to the end of our gallivant through history (and a gallivant it is ­– we rock past the Norman period and into the Tudor, just about glance in on Henry VIII, skip through the Blitz years and screech into the 21st century) what strikes me most of all is the sense of hope and determination that seems to rest at the core of the Abbey’s identity.

There is certainly a patchwork quality to the Abbey’s history: a sense that the seams of its various identities have been tucked and stitched together so as to create one large, multi-textured throw

The fact that the Abbey exists at all is a testament to human passion. Following Henry VIII’s Dissolution of the Monasteries, the Abbey fell into a state of disrepair: the roof removed for its valuable lead, and windows pilfered for their glass. Animals even moved in to graze on the grass-choked floor of the derelict building. It was only thanks to the contributions of James Montague, Bishop of Bath and Wells from 1608, that the building survived at all. Seeking shelter from a stormy downpour, Montague was disappointed to find himself just as sodden when stood inside the Abbey as he had been outside: the roof (or lack thereof) offering minimal shelter. “If we can’t save the congregation from the waters above”, the Bishop exclaimed, “how are we going to save them from the hellfires below?”; and so it was that the Abbey’s roof found a wealthy benefactor to give it some much-needed TLC.

But perhaps a more striking example of the Abbey’s survivalist instinct lies towards the east of the building, and takes the form of a huge stained glass window stretching from floor to ceiling. Made up of 56 panels, the rather spectacular glasswork depicts several key scenes from the life of Jesus. And yet despite immaculate appearances, all is not as it seems: in 1942, the window was blown clean out of its frame during a Blitz raid. Following the explosion, members of the congregation gathered together all of the glass shards that could be found and bagged them up in the hopes that one day – when the world was quiet – something may be done.

And, astonishingly, something was done. Michael Farrar Bell, grandson to the Bell of Clayton and Bell glassmakers (the company behind the original window) decided to open up the bags of glass, and get started on the jigsaw puzzle to end all jigsaw puzzles. By 1955, the job was complete, and the window reinstalled. The vivid glasswork we see today is 60% Victorian glass, and 40% replacement. I think that there is something rather nice about that: it seems to perfectly encapsulate the Abbey’s cross-historical identity. A little of this period, and a little of that: all stitched together by a dash of determination.

As I stand and look up at the window, I’m reminded of how far a little hope can take you: from a scene of darkness, into one of bright, colourful light. A good lesson in today’s more turbulent times, perhaps.

Tickets for The Best of Bath Abbey Tours are £8 for an adult, £4 for a child (aged 5–15). Two for one with BANES Discovery Card; bathabbey.org/visiting/tours