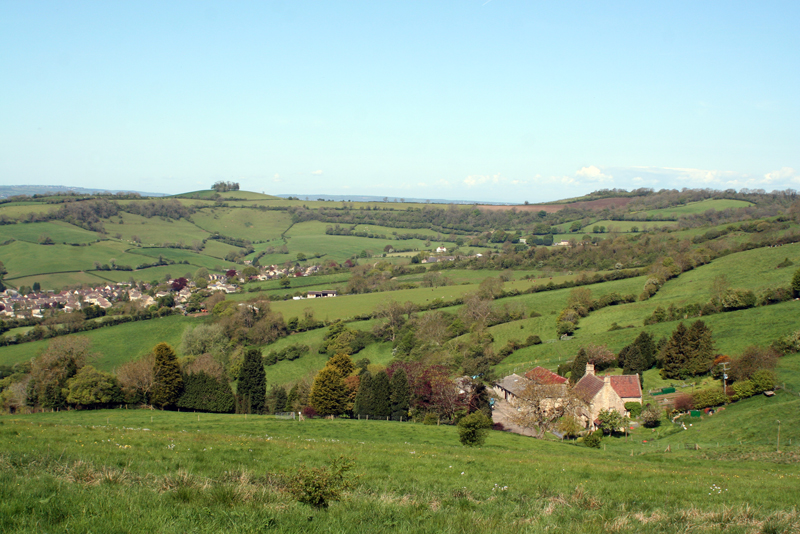 Let’s do the skyline again

Walking with a clear view of the skies and surveying the hills and the landscape stretching out beneath them is always a special experience for the walker, says Andrew Swift, who follows a skyline walk starting from Primrose Hill

Although Bath’s Skyline Walk is justly popular, it is but one of many panoramic walks which can be enjoyed on the hills surrounding the city. Among the finest is a five and a half mile walk starting at Primrose Hill on Lansdown (ST741668; BA1 5RG). This not only commands superb views of the city, but also distant prospects of Wiltshire, Somerset and, on a clear day, Wales.

To get to the starting point on foot or by car, head north up Lansdown Road. Shortly after passing the Royal High School on the right, turn left along Hamilton Road. After 325m, at a T junction, turn right up a No Through Road. At the top, turn left along a rough lane where there is usually ample parking.

At the end of the lane, go through a wooden gate on the right into Chelscombe Farm. Continue along the metalled track for 100m, before veering uphill to follow a well-walked track towards a beech copse on the summit.

When you reach it, turn to take in a spectacular view over the city – look, in particular, for Prior Park, which looks surprisingly different from this altitude.

As you carry on through a wide gap in the hedge, Beckford’s Tower comes into view ahead. It was built in 1827 and, according to William Beckford, commanded “the finest prospect in Europe”. The land around it, surrounded by a high wall, was originally laid out as pleasure gardens, but after Beckford’s death became a cemetery. Below you is 17th-century Chelscombe Farmhouse.

Follow a track running along the contours and at the end of the field go through the kissing gate (KG) ahead to continue along a track below the cemetery wall.

After 300m, carry on through two more KGs and follow a waymark sign straight on. After another 300m, as you pass between stunted trees, take a narrow, rocky track climbing between brambles. Carry on alongside a drystone wall and through another KG. After going through a wooden KG (ST732678), continue in the same direction, with the drystone wall now on your left as the path joins a metalled track for a short distance. When the metalled track curves right, however, head straight on to emerge in a large field.

Keep to the left-hand side and at the end go through a KG onto Lansdown Lane. Turn left along the verge and after 50m cross and follow a footpath sign through a gap in the wall.

This is Bath Racecourse, where there is a distinct shortage of waymarks. Trying to follow the public footpaths marked on OS maps is fraught with difficulty, as they not only cross and recross the racetrack, but there is no indication to show exactly where they do this. The undesirability of this arrangement has long been recognised and there are plans to reroute them. Fortunately, you can already follow the proposed route.

To do so, follow the footpath into the field, heading towards the buildings in the distance. After about 125m, however, bear left along a path running parallel to the wall on the left (ST725685). After 200m, as you approach the railings bordering the track, follow the wall as it bears sharp left. For
the next 800m, the path runs between the wall and the railings, but, although you are on the edge of the escarpment, trees mask any views.

Eventually, when the railings carry straight on, follow the wall as it curves left (ST718687). After 250m, when you come to a metal gate with a footpath sign, don’t go through it but continue alongside the wall as it curves right. A little further on is Prospect Stile, the highlight of the walk. According to John Wood, writing in 1742, it was to this spot that “the curious” resorted, “not only to look down upon the cities of Bath and Bristol … but to behold … a region that sets paradise itself before one’s eyes”. Today, a topograph has been installed to indicate the location of various landmarks, including Alfred’s Tower and the White Horse at Westbury.

Go through the KG (a replacement for the original stile) and follow the path downhill. You are now on the Cotswold Way. A high KG leads into Shiner’s Wood, on the far side of which another KG leads onto a crosspath which follows the course of the Roman Road from Bath to Sea Mills – or Aquae Sulis to Abonae to be precise (ST712680). Turn left through a handgate and immediately right through another one to continue along the Cotswold Way, with Kelston Round Hill on your right.

After going through two more handgates, the views open up as the path heads downhill, straddling the ridge between the valleys of the Avon and the West Brook. By Pendean Cottage the path joins a lane. After a few metres, however, when the lane swings left downhill, the path continues over a stile and across the top of a field (ST718666).

At the end of the field, a handgate leads onto a path between hedgerows which grows steeper and slippier before steps head down to another handgate.

Follow a waymark across a field, through a KG and across another field, on the far side of which a KG leads down steps onto a road (ST727663). Turn left along the pavement and take the second left down Penn Hill Road. Cross the zebra at the bottom, turn right along Weston High Street, and, after passing the bottom of Trafalgar Road, follow the pedestrian walkway ahead past the library.

Follow the path as it as climbs up to the church before curving back downhill. As you leave the churchyard, bear left uphill. Carry on uphill, crossing a road, and, after the lane dwindles to a track, go through a KG into a field (ST733665). Here you have a choice of footpaths. If you walked to the starting point, you can carry on along the Cotswold Way, with the prospect of more great views as you cross High Common on the way back to the city centre.

If you drove up to Primrose Hill, however, you need to follow the path bearing left uphill. After crossing a stony track by a bench, well sited for a final view over the city, carry straight on through a KG to continue uphill.

After going through a handgate, the views to the west, over Kelston Round Hill and Prospect Stile, open up. Then a KG leads into Primrose Hill Community Woodland, celebrating its 20th anniversary this year, and well worth a leisurely exploration. The way out is in the top right-hand corner, and, if you want to head straight for it, turn right alongside the hedgerow. After the path narrows, you emerge in an open space with a choice of three paths. Take the middle one, heading diagonally uphill, and go through a gate at the end to return to the starting point.

Distance: 5.5 miles
Time: 2.5–3.5 hours
Map: OS Explorer 155
Terrain: Some rocky, muddy and slippery sections, especially on the descent to Weston. One stile. Cows and sheep may be encountered.

Andrew Swift’s books include Country Walks from Bath and On Foot in Bath, a new and revised edition of which has just been published by akemanpress.com.