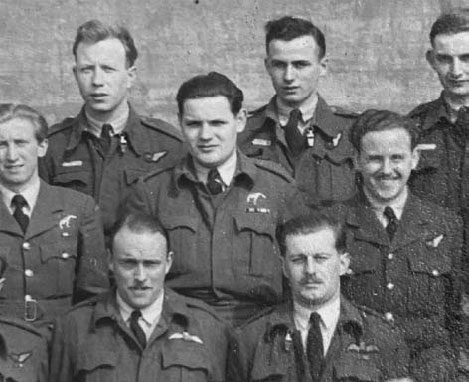 All medals have a story to tell and with careful research we can unearth the most interesting and unexpected histories: citations may tell of bravery, tragedy and acts of heroism but the spirit of human endeavour is unavoidable.

Such fortitude is to be found within a set of Second World War pilot’s medals that will be included in our Militaria, Coins and Medals auction on the 19 May. The medals were awarded to a Polish pilot, Edmund Fojud, who flew with 300 Squadron in Wellington Bombers during 1942. Like many other Polish pilots, Edmund had made his way to Britain to serve with the Royal Air Force. He flew in the ‘1000 Bomber Raids’, all the while facing daunting odds against his survival.

Fojud flew with the squadron in Wellington Mk IV’s in early 1942 during intense night bombing across Germany. His sorties in April and May attacked Essen, Dortmund, Rostock, Cologne, Hamburg, Stuttgart and Mannheim amongst other places.

The 1000 Bomber Raids hold a special place in the history of the Second World War and 300 Squadron served with distinction in the three well documented attacks on Cologne, Essen and Bremen. It seems that Fojud flew in the second of these raids. As an experienced pilot, Fojud’s skill blended with good fortune until one night early in June 1942 when his luck nearly ran out after a raid on Essen.

Edmund made a report of the incident: ‘I was the pilot of a Wellington — V. for Victory — We went to the great raid on Essen. Unfortunately for us, while still over Germany we met a Messerschmitt 110 which gave us three long bursts of fire at close range and damaged our aircraft very severely. Our rear gunner was seriously wounded, he had sixteen bullets in his arms and legs and he is still in hospital. We were flying on only one engine, as the starboard one had been damaged. A few minutes later the damaged engine caught fire. Bullets had pierced the exhaust pipe and flames were pouring through the hole. It was no joke trying to fly back over the enemy territory with the engine burning and making us a very splendid target. We were very thankful when at last we found we were over the sea, so that we did not need to worry anymore about the enemy defences.

It was not easy to fly at all, but at least the danger was less when we got away from the Nazi’s A.A. fire. Somehow we managed to reach the English coast, and we succeeded in making a fairly good landing at the first aerodrome we came to. We all felt we had been lucky to get back at all and to be able to land without a bad crash, for it was very difficult to do because of the bad trim of the damaged tail-plane.’

The official report of the incident adds that the attack occurred 35 miles West of Essen and that the wireless operator was also slightly wounded. Remarkably, the 2nd Pilot baIled out over enemy territory. The crash landing occurred at Martelsham Heath and it is also suggested that the enemy aircraft was hit by return fire as it was seen to dive steeply below cloud.

In their history of 300 Squadron, Ward and Korcz suggest that the 2nd pilot panicked and was taken prisoner when he parachuted into enemy territory. Despite these desperate events, Edmund Fojud seems to have been emboldened by his heroic efforts. He was in the air again on the 22-23rd June in B-1326 when he reports ‘a successful and satisfying trip’ bombing the docks at Emden.

Following service with 300 squadron, presumably having completed his tour, he rested for a while in Blackpool until February 1943. He then flew Transport with 691 Transport Squadron and 216 Transport Group. Following the war, Edmund stayed with the RAF as part of the Polish Resettlement Corps (Royal Air Force) signing up for two years on the 22nd November 1946, working in air traffic control at RAF Cranwell. He was discharged on the 22nd November 1948 at the termination of his service with a record of ‘Very Good’ character.

He became a naturalised British Citizen on the 17th July 1950. He lived on for many years, one of the lucky few to survive service as a Bomber Pilot. Appearing at auction for the first time, this collection comes with an extensive archive of photographs and accompanying literature.

This is just one of many lots of medals from the Victorian era and Twentieth Century, all awarded to people who found themselves in life-threatening situations fighting for their country. Bravery, heroism and loyal service shine through in each and every one.

The catalogue will be online prior to the sale and further inspiring stories await! If you would like to talk to someone about selling or buying militaria then please contact the specialist: matthew.denney@lawrences.co.uk