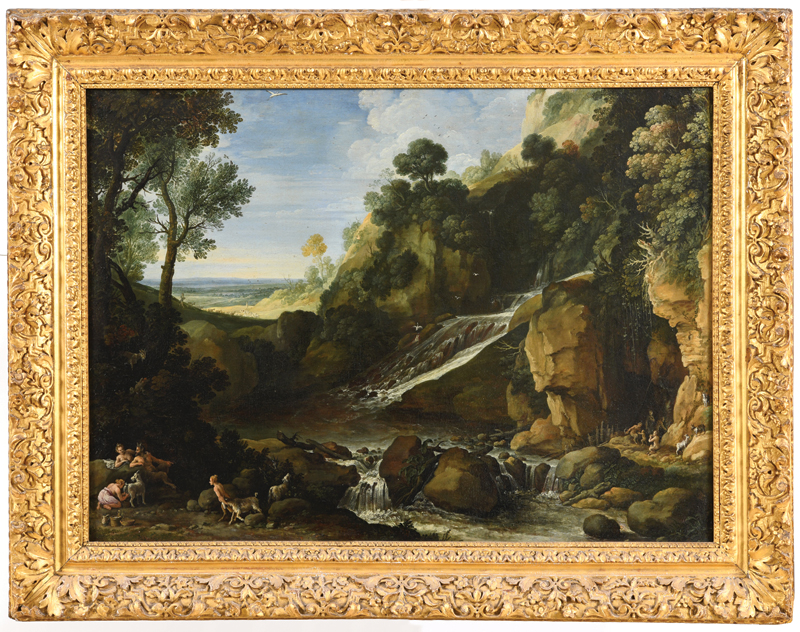 A remarkable rediscovery in the West Country has unearthed a 17th-Century masterpiece that could make £70,000 at auction in October.

The 65 x 89cm oil on canvas has been fully authenticated as the work of the notable Flemish artist Paul Bril (1554-1626). It depicts a mountainous landscape with satyrs and goats by a gushing cascade and is thought to date from 1616-1619. It is signed P. BRILL D.

“It is an extraordinary find in two ways,” explains Richard Kay at Lawrences in Crewkerne who will be auctioning the picture on October 13th. “Not only is it very rare to find such a fine and genuine work by this Flemish master in England but there is an unexpected extra element of interest. Thanks to the expertise of Drs. Luuk Pijl, the Bril authority in the Netherlands, he believes that this canvas is very probably the picture depicted in the background of Willem van Haeght’s Cabinet of Cornelis van der Geest (1626), now in the Rubenshuis in Antwerp.”

Bril, born in Breda, began his artistic career by painting landscapes on harpsichords before travelling to Rome in 1576. The artist established a reputation in Rome, working on Papal commissions in the Vatican and mingling with fellow artists such as Jan Brueghel, Adam Elsheimer and Bartolomeus Breenbergh. He died in 1626, leaving a substantial body of work in his estate.

“The picture, previously unknown to scholars and unpublished, is thought to have belonged to Cornelius van der Geest,” says Richard. “Its later history is a little unclear but it was certainly owned by Thomas Ware Smart (1810-1881), an ancestor of our vendors and an Australian art dealer who had a gallery in Sydney. It has been treasured by his descendants ever since, with a degree of nagging uncertainty about the traditional attribution to Bril. We are delighted to have secured the full approval of Drs. Pijl who describes it asan exciting and important discovery. He will be including it in his forthcoming catalogue raisonné on Bril’s oeuvre in oil. Our vendors are thrilled that it has been received so enthusiastically by the world’s leading authority on Bril.”