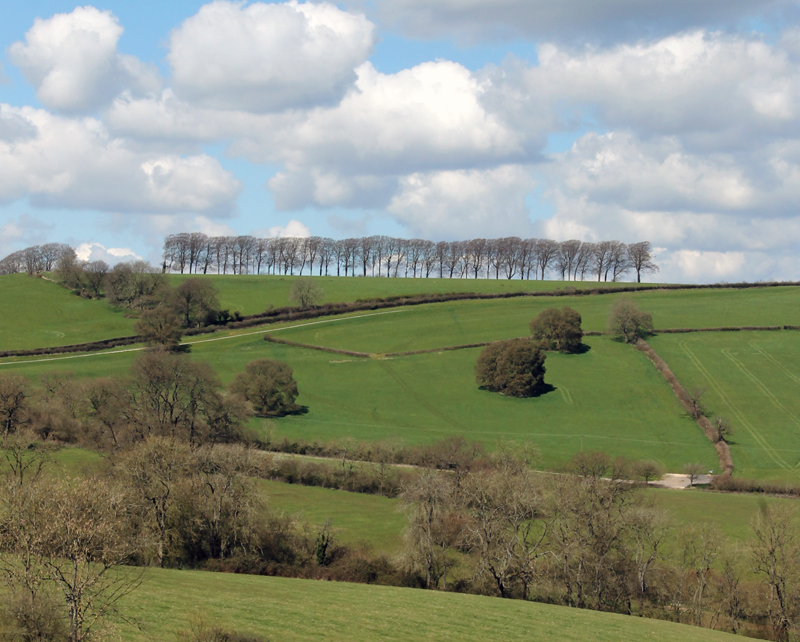 Langridge: so near and yet so far

In 1940, Arthur Mee wrote that ‘there is no more delightful experience for an Englishman than to be lost in some of the lanes around Bath, and if it is in the valley by the Gloucester Road it is all the better . . . When we come to Langridge there is nothing about us but the lovely group made by the barn, the farmhouse, and the church. Dull would he be of soul who could pass by a sight so touching in its tenderness.’

Mee is not the only writer to have waxed lyrical about Langridge. Mrs Wheatcroft, who wrote a series of ‘picturesque village rambles round Bath’ in the 1890s, thought that Gainsborough ‘must have painted some of his celebrated landscapes’ here, adding that, ‘were it not for the fertility of the hill sides, we might imagine ourselves in one of the beautiful glens which diversify the scenery of Cumberland and Lancashire.’

Even the generally restrained Rev John Collinson, in his encyclopaedic survey of the history and antiquities of Somerset, described Langridge as ‘situated three miles north from the city of Bath, on the eastern declivity of Lansdown, with a rich and beautiful vale below.’

It is extraordinary how a place so close to Bath can still seem so remote, and is so little known. Walking the grass-grown lanes of this hidden valley is to take a trip back in time. Few of the houses you pass are later than the 17th century, and some are considerably older.

If all these superlatives have sparked your interest, then this month’s walk – an undemanding five-mile hike through unspoilt countryside – is worth checking out.

It starts on Lansdown, near the monument to Sir Bevil Grenville, who died – along with hundreds of others – at the English Civil War battle fought on 5 July 1643. From the battlefields, a track through woods and fields, leads to a green lane running gently downhill.

Branching off it to follow the Cotswold Way, we pass from Somerset into Gloucestershire and enjoy a splendid view of one of the most famous landmarks around Bath – the caterpillar of trees stretched across the horizon which is one of the favourite subjects of Bath artist Nick Cudworth and featured in this magazine.

After passing a group of cottages clustered round a ford, we climb past 17th century Torney’s Court Farmhouse and back into Somerset before following a lane down through the hamlet of Tadwick. After more 17th century buildings comes something more recent – a ruined hut and the remains of what looks like an anti-aircraft emplacement connected with the nearby Second World War airfield at Charmy Down.

From there, we cut across a field and head up another lane to Langridge, where – as when Arthur Mee visited – there is just a tiny church, Court Farm, and a brook burbling along below. St Mary Magdalene Church dates from Norman times, and received an honourable mention in the Domesday Book, but is no larger now than it was then. Hemmed in by rolling hills, this really is a place that time forgot.

Much of the church is Norman, although the apse at its east end was added by Major Davis (of Empire Hotel fame) in 1872. Along with memorials to members of the Blathwayt family, the church’s treasures include a 13th-century carving of the Madonna and Child. Sadly, one of its greatest treasures, a medieval brass depicting Elizabeth Walsche, with a small dog at her feet, was stolen in 2002.

Court Farm next door dates from the 14th century, although, given how long ago this valley has been settled, it may stand on the site of a much older building. Roman coins of the 4th century have been discovered in the churchyard, and, while there is no clue as to who left them there or why, the valley they looked out upon still appears much the same today.

From here, all that remains is a gentle climb up a green lane embowered by high-banked trees to return to the starting point.

To get to the starting point, drive north from Bath up Lansdown Road. Three-quarters of a mile after passing the main entrance to Bath Racecourse, just past signs warning you to slow down, pull into a lay-by on the right (ST721702).

Take the path leading towards the Lansdown Monument and continue along a path curving through woodland. Cross a stepped stile, carry on beside a wall, cross another stepped stile at the end and carry on downhill. After going through a seven-bar gate, continue down a green lane for 350 metres, before turning left to follow a Cotswold Way sign through a gate. (ST730703).

Head down a field, go through a kissing gate and continue in the same direction, passing a bench ideally placed to take in the view. Carry on through a pair of gates, heading towards a group of houses. At the bottom, when you come to a metalled track, turn left across a cattle grid and bear right along a rough track (ST734709).

Follow the track as it bears right through a gate and continue as it curves uphill, ignoring a gate on the left. Go through a gateway and head diagonally across a field towards a waymark post between a lone tree and a large barn in the far corner. Follow the waymark past a high fence, and go through a handgate, passing Torneys Court Farm. Carry on through another handgate and head up to a KG. Turn right along a drive and right again when you come to a lane (ST741706).

After 850m, just past Walnut Lodge, go through a KG on the right. Head diagonally down the field to another KG and turn right along a lane. After 250m, a lane branches off right by Tyning Cottage (ST742695). Although this is the way back, before turning up it carry on for 250m to Langridge church and Court Farm. From there, retrace your steps and turn up the lane.

After 500m, turn left by an old barn and carry on up a green lane, passing the turning to the Cotswold Way you took earlier, and carry on to return to the starting point.

Level of challenge: mostly on lanes and well-marked tracks, although a few sections may be muddy