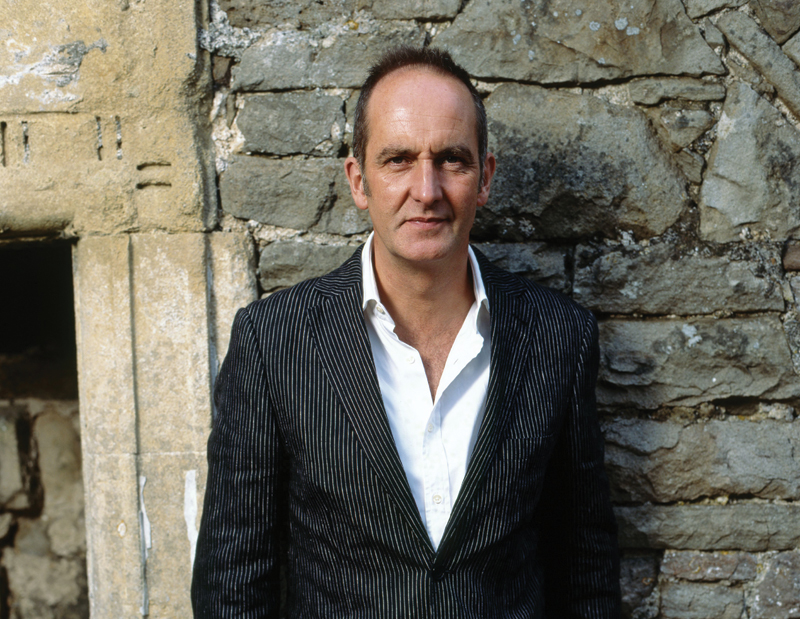 Kevin McCloud is a familiar face in our homes as the presenter of Grand Designs, and he’s just been awarded an MBE for his work on sustainability and energy saving. Melissa Blease asks him about his latest projects and his love of the west country

On a good day, Bath reminds me of Vincenza in the summer; it’s a beautiful place,” says Kevin McCloud, the British designer, writer and television presenter best known for his work on the Channel 4 TV series Grand Designs, which he’s presented since the programme’s debut almost two decades ago. Although Kevin has lived in the west country (specifically the Frome/Warminster area) since 1987, he’s at home in another way entirely when we chat. “I’m currently on the 13th floor of high rise development in Vauxhall, London,” he says. “And there’s quite a lot of building development going on around me… which of course, I’m very used to. But no, I’m not putting my oar in on any of the building sites that I pass – I wear glasses and a flat cap when I’m out and about, and go around the word in disguise. I like a quiet life!”

Kevin’s life, however, has been far from quiet. He studied history of art and architecture at the University of Cambridge and went on to train as a theatre designer before establishing his own lighting design practice and manufacturing business responsible for lighting fittings in venues such as Edinburgh Castle and Harrods’ food hall ceiling. In early 2007 he created HAB Housing Limited (‘Happiness, Architecture, Beauty’) and led a consortium to purchase land to build a HAB housing development on the outskirts of Swindon. But in the direct public eye, Grand Designs (alongside early episodes of Home Front and the tall buildings/climbing series Don’t Look Down) brought him into our own homes on a regular basis.

“There will always be questions around whether television simply marks and records the passage of time or whether it determines the changes that happen over that time,” says Kevin, when asked about the series’ legacy. “Programming may indeed be increasingly determining who we are, and how we all live. But Grand Designs fits into a type of programming that’s based on very traditional storytelling; in each project we’re at the mercy of our contributors and the work that they’re doing, so I always hesitate to suggest that Grand Designs has been in any way responsible for changing tastes – we simply record what we see happening.”

Kevin readily acknowledges, though, that big changes have indeed gone on around him (and us!) outside of the Grand Designs ‘bubble’ since the series first began – and not all of them are positive. “Some amazingly negative influences have impacted on British construction in the past 20 years,” he says. “The two biggest factors are the abandonment of the sustainability goals that Gordon Brown adopted as prime minister. I’m shocked that the Department for Energy and Climate Change no longer even exists – it’s as though the current government has lost the people, the enthusiasm, the drive and the collective will for driving forward. Today it’s all about cash saving, and succumbing to the pressures of the market place – developers and house builders who want to save some money and not have to be compliant with so much regulation. I think it’s disastrous, and a massive retrograde step. The other huge issue is that in the 40 years I’ve been working in design and building, I’ve seen us move from a place where all our building trades used to employ apprentices on formal training programmes to a position where it’s all a bit of a free-for-all. For around 15 years, we’ve relied on migrant European labour from countries like Poland where people are still trained to a very high level, which has been very much to our benefit. As a result of Brexit combined with factors such as the Polish economy strengthening again, we’re going to find construction reverting back to a very crude, unskilled place if we’re not careful. We’ve got a crisis in affordable housing, we have a crisis in planning, and we have a crisis in the construction skill base – we’ve taken some hugely retrograde steps.”

The award sits in that little part of my mind where my conscience is, and reminds me what I should be doing next.

Oh dear. Can Kevin see any silver linings to the clouds on the horizon? “Oh for sure, yes indeed,” he says. “There’s a lot of very exciting energy technology emerging in this country. The focus at the moment is about trying to squeeze heating, ventilation and hot water down into one small, super-efficient box. I’m very excited by developments in infra-red heating and 24-volt renewable energy systems as well. When I was trying all this stuff out ten years ago, I’d have about five different suppliers to deal with, including an engineer, an electrician and somebody who dealt with the software; today, it’s all in one box with one phone number on the front of it, so if anything goes wrong you just ring one person directly. And it’s increasingly accessible to everybody; take the Mitsubishi air source heat pump – you just buy it, job done. Mechanical ventilation and heat recovery is now standard in many homes”.

We can expect to be introduced to more on this subject when Grand Designs Live – the award-winning home event presented by Kevin and specialising in ideas, inspiration and expert advice on all aspects of the domestic built environment – returns to London’s ExCell from 4–12 May and Birmingham’s NEC from 9–13 October. This will be preceded by a brand new TV series (My Grand Designs) which follows ten different houses on a street at an innovative development called Graven Hill in Bicester: the site of a new town consisting of 2,000 self-build homes. “Right now, I’m poised at the start of a kind of maelstrom that’s about to whir into action,” says Kevin.

It doesn’t sound as though he’s going to have much time, then, to enjoy his preferred ‘quiet life’ in his west country base over the coming months. What does Kevin most miss about home when he’s on the road? “I rather enjoy the slightly chaotic nature of politics in the region, and the slightly chaotic way in which business such as farming is carried out – it’s not the agricultural farming country of Norfolk, it’s sort of … well, wilder! And I love the Mendips, and the Quantocks, and the extraordinary Unesco World Heritage stuff in Bath. I adore the west country.”

If Kevin is a (west) country boy at heart, he’s a humble one, too. “There are many people who find the honours system trite, or silly, or not worth responding to, but I find it very flattering; it’s just a lovely, lovely thing,” he says, when asked about his MBE for services to sustainable design and energy saving property refurbishment. “It does’’t change who you are, it doesn’t turn you into Superman, it doesn’t alter your health or bring fame and riches; it’s just a very lovely recognition of the things you believe in – and all the work that I do is very much about the things that I believe in. The award sits in that little part of my mind where my conscience
is, and reminds me what I should be doing next. My work here is not done!” Grand news indeed.