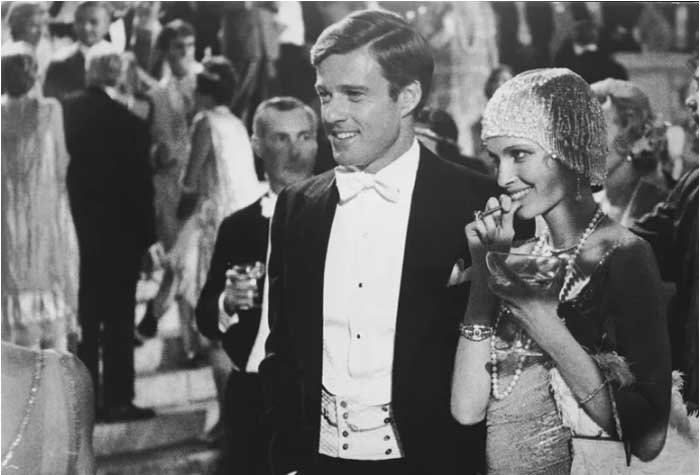 First love hits hard. For Melissa Blease it was love at first sight, but it was within the pages of a book that she found Jay Gatsby, and the love affair, decades later, is still going strong…

As a precocious 15 year old, I’d already started to challenge the much-vaunted concept of finding a boyfriend who would turn out to be ‘The One’. My main occupation at the time was writing long letters to the editor of Jackie magazine ranting about just how unrealistic, misleading and limiting the prospect was – and this was before I’d even experienced my first kiss. The editor never replied. F. Scott Fitzgerald, however, spoke my language.

I came across The Great Gatsby in the library while searching for Interview with a Vampire. Somehow, FSG had got himself mixed up with Anne Rice; an unlikely partnership perhaps, but one that turned my head away from mythical creatures of the night and towards unobtainable, difficult men of a different nature forever.

I took the book home with me because of one sentence on the first page: “And as I walked on, I was lonely no longer” – so much melodrama expressed in so few words. And right there, a love affair began. But it was not the story’s narrator Nicholas Carraway that stole my heart – oooh no, that would have been far too easy; Nick was just too simpering, too fawning, too downright obvious for my affections. Jay Gatsby, however, made my heart go pitter-pat: a mysterious millionaire at the epicentre of a glamorous, chic clique of hedonists – swoon!

To those who didn’t read him the way I did (and of course, only I understood him), Gatz was a boorish, egocentric, misogynistic bully. But I figured that he only needed the love of a good woman – a strong, independent character far removed from the flighty, shallow, wimpy women with whom he chose to foxtrot through the early 1920s – to complete the final step of his reinvention and become the perfect boyfriend. And I, of course, was the woman for him.

On one level, the fact that my first love was fictitious made him a problematic paramour. But Jay’s other-worldly presence made for a perfect playmate who, over those turbulent teenage years, helped me deal with the inevitable slurry of heartache, heartbreak and downright disheartening youthful flings. Jay was always there for me, patiently waiting to dry my tears and rekindle a sense of optimism; he was The One who never let me down, The One who no other man could ever live up to – The One who never actually existed in the first place (now there’s a twist that the Jackie magazine editor never considered).

Eventually (and, perhaps, inevitably), Jay become yesterday’s One, as all first loves tend to do. But still, decades on, I occasionally indulge my inner teenager and take an imaginary road trip with Gatz in his iconic, daffodil-yellow Rolls Royce for old times’ sake, careful never to reveal what the future actually held for either of us.

The Great Gatsby has become, for me, the literary version of a sip from the fountain of youth, today safely stored in the mysterious depths of a sliver of sleek technology far removed from the nicotine-stained hardback book where we first met; to this day, him and I beat on, boats against the current, borne back ceaselessly into the past.

Considered as Fitzgerald’s magnum opus, The Great Gatsby is a small but perfectly formed novel, packed with big ideas on themes including nostalgia, freedom, love, social hierarchy, aspiration, inequality and decadence. Set across fictional Long Island locations during the summer of 1922, and narrated by young, reflective Nick Carraway, the story focuses on the charismatic Jay Gatsby – a mysterious millionaire at the epicentre of a glamorous, chic clique of hedonists – and his complicated obsession with Nick’s beautiful cousin Daisy, one of Gatsby’s ‘set’. Evocative, extravagant, elegiac and elegant.