Kate Cross, director of the egg theatre, was appointed an MBE in the 2018 Queen’s Birthday Honours list in recognition of her work in children’s theatre. Emma Clegg spoke to Kate and uncovered the magic of her theatrical vision

It was James Graham Brown, formerly of the Royal High School in Bath, who nominated Kate for her MBE, but Kate’s circle of supporters has always been extensive and vocal. This is due to her sterling, innovative work as she formulated the idea for the egg, which opened in 2005, and then employed as its director. The nomination of a candidate for an MBE involves gathering a number of citations. “When I read the citations,” says Kate, “what I realised was I felt very understood. It was probably the best school report I’ve ever had.”

Kate did a drama degree at Kent University, so was being an actor ever an option? “I got one year into that degree and thought that no way on this earth did I want to be an actor, I couldn’t cope with the rejection, quite honestly. And I wasn’t very good. And that’s not the kind of person I am. I am too much of a driver. Being an actor is quite a servile role. You are at someone else’s bidding.”

It seems that Kate was destined to be a challenging forcefield rather than a follower of rules. “The first thing I did after university was a PGCE in drama. But there was no way I was ever going to be a teacher. There just wasn’t the freedom to be innovative. I would feel constrained within a building that has bells in it. What happens if I haven’t finished? A bell is the death of creativity.”

Kate joined Theatre Royal Bath in the late 1990s, working as a freelance education officer, and then, later, as head of education. This was an formulative time. Discussions were taking place over a fundraising campaign for the education programme. Danny Moir, the director of TRB, asked Kate to think of a strategy for fundraising. 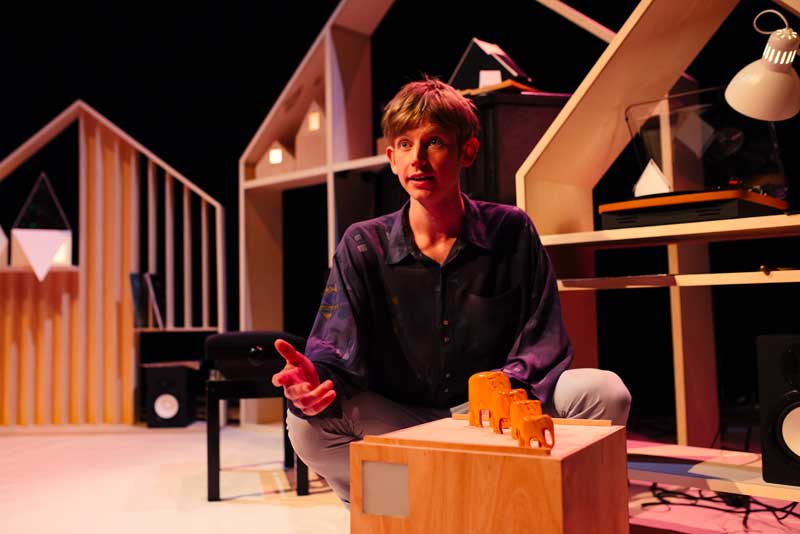 I Wish I Was a Mountain by Toby Thompson, an interpretation of a Herman Hesse story, showed at the egg in 2018. Photo by Jack Offord

“It was a beautiful moment for me,” Kate says. “Because at the time what is now the egg was still Robins Cinema, and we knew that as soon as the multiplex opened this would no longer be a cinema. So I said, ‘Probably the best thing to do would be to buy the cinema next door and turn it into a dedicated theatre for children and young people’. And they said ‘Why would you do that?’ And I gave them all the reasons.”

Where did this passionate conviction come from? “What has always driven me is a young person’s experience of going to the theatre and watching a play. And I am still fascinated by this, what I think is a very intimate and private experience. You experience theatre in a collective way, but you have this private dialogue.”

While Kate emphasises the collaborative nature of her work at the egg, it is clear that it is she who is the driving energy, creating the momentum and finding unexpected paths. “I’m quite rebellious so I like to do things that other people aren’t doing. I like to shake up peoples’ ideas of what they are going to expect.”

The egg is one of just six dedicated children’s theatres in the country. “When we opened the egg,” Kate says, “I hoped that many more would spring up all over the country. I think I was dismayed that they didn’t. But we were at the tail end of a very affluent period in the arts. And then the credit crunch happened.”

The idea of a children’s theatre is still a challenging concept. “There is a prevailing, British notion about children that they are not very clever,” maintains Kate. “And that people who work with children aren’t as clever or sophisticated as people who do things for adults. So you are always fighting the not very ‘importantness’ of children.

“And then economically it is a disaster area because they don’t go to work, so they don’t have the same money to pay the ticket prices.” More than this, Monday to Friday performances don’t work for school children. This is where the concept for the egg took form: “The economic argument for opening the egg was so we could create a platform for good-quality theatre, and where a good audience can stay for two or three or five days. We had to demonstrate that this was viable, that there was an audience and that they would come.”

One of the groundbreaking projects introduced by Kate, in 2014, was the Incubator. “I was becoming increasingly frustrated by the climate in which work for young audiences was being made,” says Kate. The project encouraged artists with ideas for productions to come forward. In return they would be given space, time, money, training, access to other artists. But most of all, Kate explains, they were instructed to “Forget about the money, forget about the audience age, forget about the show’s title. Let us worry about that. Just what is it that you are burning to say?”

This has opened up the creative possibilities and has given the egg an ability to feed their resources into the artists’ raw ideas at an early point, to use their creativity and feed it. Working in this way frees the artists from the clutter of marketing, of political expectation, of convention, and allows them to focus on the inspiration, and to create good theatre. “If you are fitting into boxes, the very last thing you are going to be is creative and artistic,” declares Kate. 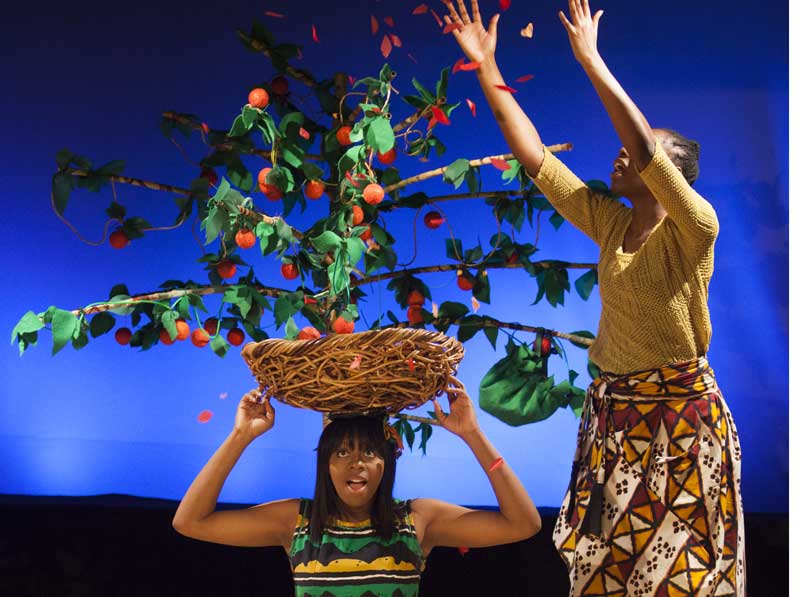 Handa’s Surprise by Little Angel Theatre was a 2018 production

Another major achievement has been the egg’s work with schools in its Schools Without Walls project. This involves a cohort of children taking up residence at the egg for seven weeks over the summer term. They follow a creative curriculum which is supported by their teachers, egg staff and by 5×5×5=creativity, a group which specialises in children’s exploration and expression of ideas. The philosophy places the children at the centre of their own learning. By putting them into a new setting, the conventions, behaviours and habits associated with the ‘classroom’ start to fall away.

“We could make our lives easier by saying ‘let’s find out what schools want from us and give it to them’,” says Kate. “But I don’t want to give schools what they want. Arrogantly, I’m sorry, I want to give them what they don’t know they want, which is happy learners, who feel as though they have a voice, their own creativity.”

Other offerings at the egg include the youth theatre and courses and workshops with children, young adults and teachers. Most recently, the egg has developed a working partnership with Bath College where they deliver the Level 3 Performing Arts two-year course.

What are Kate’s plans for the egg? “On one hand I want to go very international. We are an island and we think in an insular way. I am British and I need to be challenged from another perspective.

“On the other hand I want to go right back home and create more inclusivity. A fully accessible building is where the story begins, not where it ends. The marketing material, how you describe your shows all has the potential to reject people without your realising it.”

As we wind up our conversation, Kate tells me how the best after-show feedback is overheard in the toilets. “The profoundness of those conversations between parent and child is the most beautiful thing.”

That shared experience and that open communication – in the toilets or elsewhere – is what makes the egg so very special.