David Suchet returns to Theatre Royal Bath in a new production of Arthur Miller’s The Price. Emma Clegg speaks to the actor, known for his ability to get inside his characters, about the challenges of his new role

First performed in 1968 on Broadway, 2018 is the 50th anniversary of Arthur Miller’s The Price. David Suchet, who is appearing in the play at Theatre Royal Bath from 9–25 August, told me that it still has resonance today: “The beautiful thing about this play, in the greatest sense of the word, is that it is timeless. It is to do with families dealing with their parents’ possessions. The fact it was written in 1968 doesn’t stop it being as modern now as it was then.”

David Suchet feels an affinity with Arthur Miller, having played a number of roles in his plays over the years, including the same character of Solomon in 1971 when he was just 25, and more recently in 2010 playing Joe in Miller’s All My Sons. “Arthur Miller has got to be my favourite playwright of the 20th century. Every character that I’ve played of his, I feel I understand where Miller is coming from with the character and I hope I’m able to embrace that fully. His plays speak to me. Playing Joe in All My Sons was, I think, one of the most extraordinary moments in a career for an actor.” 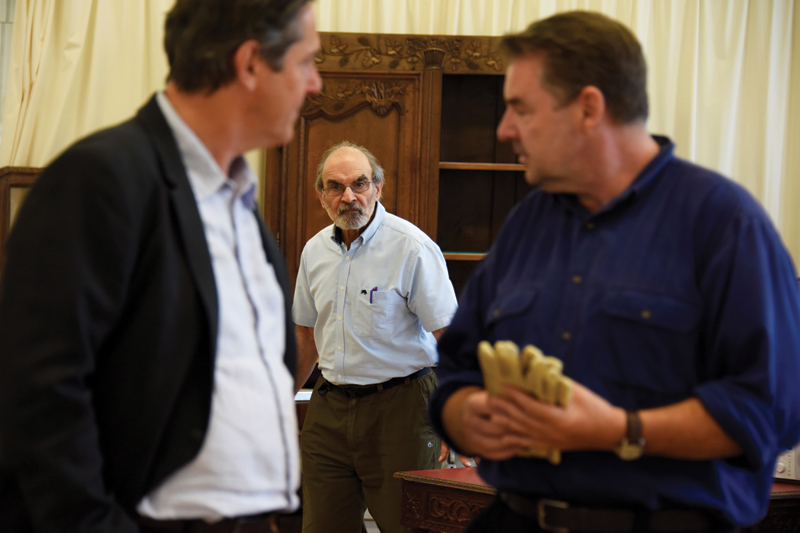 While not autobiographical, The Price, perhaps more than any other of Miller’s plays, has similarities to aspects of Arthur Miller’s own life. The father of the two sons in the play, recently deceased, was broken by the financial crash of 1929, in the same way as Miller’s own father. And Miller had an older brother, just as the protagonist Victor does. With the family exiled after the crash, Miller even sold bread to help the family make ends meet.

The play sees the two brothers, who have been estranged for 16 years, return to their family home after the death of their father, meeting to dispose of the furniture in his apartment. Victor, played by Downton Abbey’s Brendan Coyle, has sacrificed his career to look after his widowed father. Older brother Walter – played by Adrian Lukis who played Wickham in the 1995 adaptation of Pride and Prejudice – who contributed little to supporting his father, has become a successful surgeon. Yes, it’s the perfect forum for the airing of weighty past family resentments. David Suchet’s character, Gregory Solomon, a silver-tongued used furniture dealer, arrives to close a furniture sale, but encounters much more, and in the second part of the play is forced to confront aspects of his own life.

“My character is coming in to assess and appraise the value of a family’s furniture. And I walk in to a situation where I’m meeting a family who haven’t really seen each other for 16 years. What comes out is that the family, the history of the family, and their view of money and possessions are things that separate rather than heal. The drama is one of relationships and also very harsh words.”

Gregory Solomon is 89, but he doesn’t come across as an old man. “He’s 89 but he should neither look it or appear it,” says Suchet. “It should come as a surprise to everybody that he is that old. To the people in the play as well as to the people in the audience. He is just a very sprightly 89-year-old.”

“The danger with this particular role is that it has very many humorous and comic elements, and one must not be seduced by that because there is a lot of tragedy in Solomon”

Researching the character of Solomon leading up to rehearsals was a process of piecing together historical information to build up a whole picture for Suchet. “I use my research to give me a foundational understanding of my character. So as early as I get the script, I can find out things about my character that can inform the play in rehearsals.” Suchet looked at when Solomon was born (he was 24 in 1903, so he was born in 1879), researched the time when he lived and where he would have been living. It seems likely that this would have been where the Jewish population in Russia were, probably in the Pale of Settlement in Lithuania, then part of Russia. (Interestingly the research would have had some personal relevance as Suchet’s father was of Lithuanian Jewish descent, from Kretinga in the Pale of Settlement of the Russian Empire, and his mother was of Russian Jewish descent on her own father’s side.) Then it’s a case of researching what was happening in the dates mentioned in the play, seeing how his life would have been affected by what was happening in America and researching the experience of Russian refugees coming into New York. “This is where the internet is so wonderful,” says Suchet.

We all know that Suchet has a way with an accent, especially that of a certain Belgian detective, but how will Soloman’s accent be formed? “The accent is on the way,” says David. “He’s got to have a Russian Jewish accent, and it’s got to be tinged with a bit of New York/American. He was 24 when he arrives there, so basically he’s a European Russian Jew who has lived in New York since he was 24.”

The Price is directed by Jonathan Church, who is directing the whole summer season at Theatre Royal Bath. “Jonathan Church is the best kind of director because he works in collaboration,” Suchet enthuses. “So rather than being told what to do, he allows the actor full creativity and then works with what you give him.”

Victor, the younger brother, has a long scene with Solomon in the first act. This has plenty of humour in the characterisation of the grumpy, eccentric, wise old Jewish dealer. Yet the scene is not just a comedy routine, and is interlaced with tension and drama: “I think the danger with this particular role,” says Suchet “is that it does have very many humorous and comic elements, and one must not be seduced by that. Because there is a lot of tragedy in Solomon. That has to come out, and you can’t have that come out if you are just playing a clown.”

What is the meaning and significance of the play’s title? It’s not just the price of the furniture being referred to here. “It’s the price of your own choices that you make in life,” says Suchet, “what is the worth of a human life when you are dead, what is the cost of your relationships if they break down? What is the price of commodity, of materialism versus a more spiritual, internal way of being? ‘The price’ goes on and on and on.”

Arthur Miller does not create easy drama – be prepared for bleak materialism, the grim tensions within family relationships and the stark analysis of how money controls us. But also be prepared for what promises to be a magnetic performance from David Suchet, returning to Theatre Royal Bath, which Suchet describes as “one of my favourite venues in the whole country and my favourite city in England.”