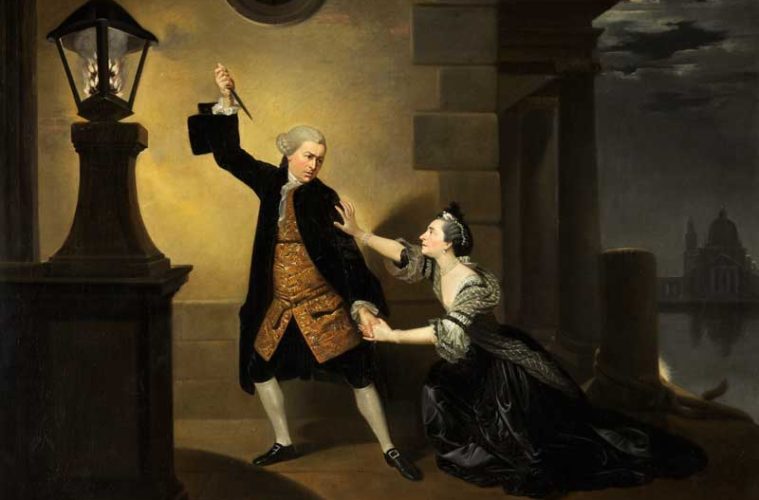 A full moon, a shadowy scene and a dagger raised in threat. Here’s a painting to set your heart beating. Art curator and historian Monserrat Pis Marcos from The Holburne Museum explains the story behind Johann Zoffany’s Venice Preserv’d, one of four versions that Zoffany painted in his lifetime.

The wavering light of a smoky oil lamp illuminates a dramatic scene: an enraged nobleman, holding a dagger with his right hand, looks menacingly at an elegantly dressed lady, who imploringly kneels in front of him while grabbing his left hand in an attempt to restrain him. The full moon reflects on the quiet waters of the Venetian lagoon as the profile of the church of San Giorgio Maggire emerges from the shadows in the distance.

However, appearances can be deceiving, since the tragedy unfolding before our eyes is, in fact, a theatrical production of Thomas Otway’s Venice Preserv’d (1682) in a re-staging at London’s Drury Lane theatre in 1762. The play revolves around a thwarted political conspiracy to overthrow the republic of Venice, which results in the execution of the conspirators and an unhappy end for the two main characters. These are Jaffier, a Venetian impoverished noble involved in the plot, who eventually commits suicide, and Belvidera, the disinherited daughter of a Venetian senator and Jaffier’s faithful wife, who dies insane.

The play revolves around a thwarted political conspiracy to overthrow the republic of Venice, which results in the execution of the conspirators and an unhappy end for the two main characters.

This scene takes place in Act IV and is set in the Senate House within the Doge’s Palace. It captures a moment of heightened tension: Belvidera tried to stop the conspiracy as its success would have meant the murder of her father and she had been assaulted by one of the conspirators. Her plan involved persuading Jaffier to betray Pierre, his dear friend and chief conspirator, under the promise that his reward would be sparing some of the plotters’ lives. When the Venetian Senate breaks its word and sentences all the conspirators to death, including Pierre, Jaffier brings dishonour upon himself and, spurred by remorse, attempts to kill Belvidera. His love for his wife will eventually stop his hand and make him put the dagger away:

In the 18th-century production immortalised in this painting, Jaffier was played by the actor, playwright and theatre manager David Garrick (1717–1779), and Belvidera by the singer and actress Susannah Cibber (1714–1766).

Susannah Maria Cibber, née Arne, was one of the most famous actresses of her time. After launching her career as a singer – she premièred Handel’s Messiah in Dublin in 1741 – she received vocal training as a speaking actress from her husband’s father, the Poet Laureate Colley Cibber. Her talent for tragedy was supported by her expressive voice and her slender build, and when she moved to Drury Lane theatre in 1744 to play alongside Garrick, her arresting acting took the London stage by storm.

David Garrick started out as a playwright, but his theatre career truly flourished following his casting in 1741 as Shakespeare’s Richard III. His acting style, more naturalistic than the declamatory approach previously in vogue, found a favourable audience among London theatregoers and quickly made his fortune. A few years later he bought Drury Lane Theatre and introduced significant innovations in multiple areas, from scenery and lighting to costuming and stage procedures. He became such a prominent public figure that he was honoured with a burial at the Poet’s Corner in Westminster Abbey.

Among the multiple friends and acquaintances that he made throughout his life, in 1762 Garrick met a German artist who was working in London as studio assistant to Benjamin Wilson (1721–1788). He was so impressed by his skill at capturing details in a naturalistic manner that Garrick persuaded him to leave his employer and work for him, producing several theatrical conversation pieces in the following years.

This chance encounter changed the life of Johan Zoffany (1733-1810). The Frankfurt-born son of a cabinet maker, he had trained in Germany and Rome and had arrived in London in 1760. Garrick’s patronage catapulted his career. Zoffany set up his own studio and in 1769 was appointed to the Royal Academy. He painted the aristocracy and the British royal family, becoming court painter to King George III and Queen Charlotte – who was also of German origin. An artistic celebrity in his own right, he spent seven years in Italy between 1772 and 1779 and six in India between 1783 and 1789, where he ingratiated himself with British families and Indian princes alike. He returned to England in 1789 in order to restore his ill health and enjoy a comfortable retirement.

Garrick’s patronage catapulted his [Zoffany’s] career. Zoffany set up his own studio and in 1769 was appointed to the Royal Academy

Along with its aesthetic qualities, the biography of this object is equally fascinating. It was owned by the novelist and playwright William Somerset Maugham (1874–1965), who assembled one of the largest collections of theatrical paintings in the country. This version of Venice Preserv’d – Zoffany painted four – was his second acquisition and had previously been owned by the actor Sir Henry Irving (1838–1905). Maugham left his collection to the National Theatre in 1951, and in 2010 this was transferred to Bath, where it is now shared between the Theatre Royal and the Holburne Museum. The Holburne boasts one of the largest collection of works by Zoffany in the UK.