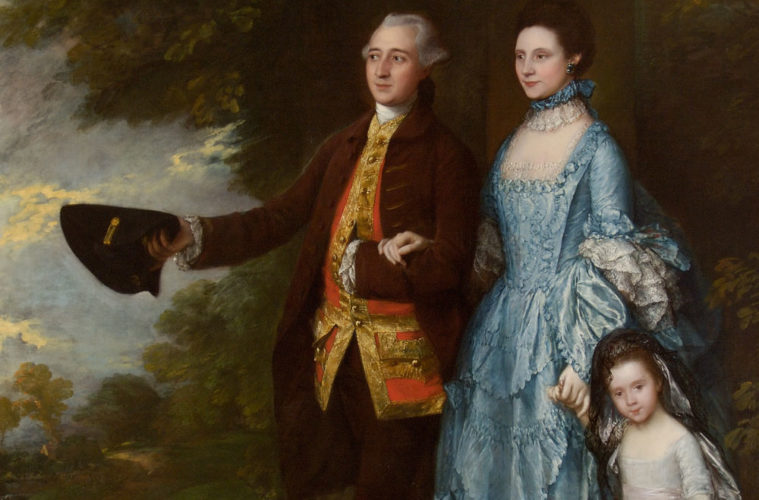 Inside Art: The Byam Family

The natural world is a great sustenance – particularly in these challenging times – but forging connections with nature is a universal sentiment that has been documented again and again in the annals of art. Thomas Gainsborough’s The Byam Family, painted in the 18th century, shows this sensibility, commissioned to portray how the family identified themselves as having an appreciation of nature.

Art curator and historian Monserrat Pis Marcos from The Holburne Museum gives us some insights into the painting.

In an idyllic landscape, a couple and their child stroll peacefully. While the two adults are deep in contemplation of the countryside before them, the little girl looks directly at the viewer, drawing us into the scene.

This family portrait by Thomas Gainsborough (1727–1788) was originally painted around 1762 as a double portrait to celebrate the recent marriage of George Byam (1734–1779) and Louisa Bathurst (d. 1779). This type of portrait, in which a couple show their attachment as well as their sensibility and appreciation of nature, became increasingly popular in Britain throughout the 18th century.

The inclusion of a couple’s first child in an earlier painting was not an unusual practice, and this is precisely what Gainsborough was asked to do in 1766 in order to incorporate little Selina Byam (1760–1846). This was also a golden opportunity to bring the painting up to date, as conservation work has shown: George Byam’s waistcoat was originally blue, and Louisa Bathurst’s gown was pink – in fact, Gainsborough took advantage of the pre-existing colour and reused it for Selina’s flesh. Similarly, in the first version of the painting Louisa was wearing a different choker and a cap that was no longer fashionable a few years later, so the hairstyle was adapted to the latest trend.

As a prosperous and influential family, the Byams had good reason to wish to be immortalised dressed up to their nines. George Byam was a wealthy landowner from Antigua, in the West Indies, and Louisa Bathurst was the daughter of an MP whose family also had interests in the West Indies. When both her parents passed in 1779, Selina, as the eldest of four surviving sisters, inherited the family fortune as well as this portrait.

Thomas Gainsborough resided in Bath between 1758/59 and 1774. In 1760 he rented the most expensive property in the city, next to the abbey, before moving to the Circus in 1766. He had arrived from Ipswich with his family as an unknown portrait painter, and in the 16 years he spent in Bath he built a steady reputation that eventually turned him into one of the most acclaimed and sought-after artists in the country. The Byam Family was the largest painting Gainsborough had undertaken until then, and today it is the largest of his works still in the UK. At the time the painting cost 100 guineas, which would have been enough to cover eight months of the artist’s rent!

The painting remained in Selina’s family until Henry Hony, her great grandson, gifted it to Marlborough College, in Wiltshire, in 1955. In 1999 the work was sold to the Andrew Brownsword Arts Foundation. Since 2001 it has been on long-term loan to the Holburne Museum, becoming one of our most beloved pictures. In late 2019, The Byam Family travelled to the Pushkin Museum, in Moscow, to be included in a temporary exhibition. Since March 2020 it is back in our galleries and ready to welcome visitors when the museum reopens.