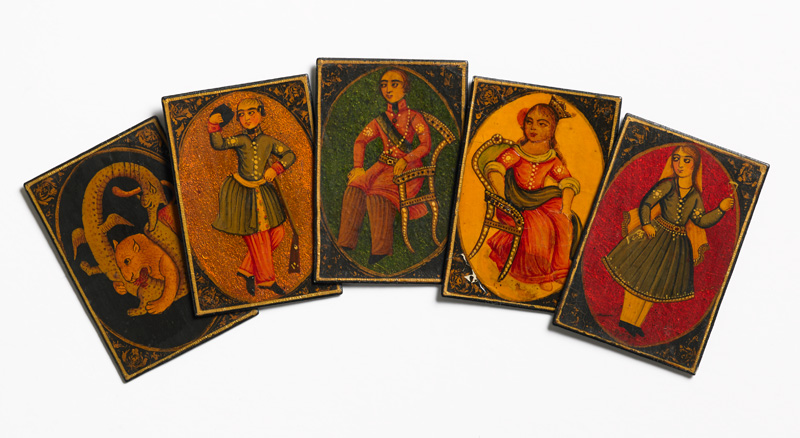 Art curator and historian Monserrat Pis Marcos from The Holburne Museum explains the fascinating story of how five hand-painted papier mâché playing cards – once used to play a popular Persian game – landed in the hands of The Holburne.

These five cards belong to a set used to play a Persian game called As-Nas (آس ناس). The term roughly translates as ‘Ace-People’, which fittingly describes the suits that make a standard pack: the As (Ace), often represented by a lion – in this case, fighting against a dragon; a Serbaz (Soldier); a Shah (King); a Bibi (Queen); and a Couli or Lakat (Dancer). The highest score is the As, followed by the Shah, the Bibi, the Serbaz and the Lakat. The game is played by four people, with each player receiving five cards, and the rules resemble very closely those of poker. As-Nas fell out of fashion in the second half of the 20th century.

The cards are made of lacquered, hand-painted papier mâché. Lacquer was a popular technique in Persia between the late 18th and the early 20th centuries; it provided a protective glaze that preserved the paint layer while offering a glossy finish. The King and the Queen of this set are seated on richly decorated chairs that highlight their status, while the Soldier and the Dancer are both standing up. The former carries a weapon and the latter a bottle and a glass, and she is wearing a short, flared skirt that was in vogue in the late 19th century.

The pack was part of a major gift of 85 objects donated by Miss Ellen Tanner to the Holburne Museum between 1917 and 1932. Ellen Georgiana Tanner (1874–1937) was the eldest daughter of an affluent attorney-at-law from Bristol whose passing in 1887 endowed her with a fortune that allowed her to travel extensively. She was among the first British women to travel solo to the Middle East, and most of the objects that she gave to the Holburne were acquired in 1894 during the first of her three trips to Persia (present-day Iran).

Miss Tanner stood out from other contemporary woman travellers in that she journeyed on horseback and on her own, with the assistance of local guides and personal connections. She stayed with friends and acquaintances, in caravanserais or in her own tent, and she explored Baghdad, Shiraz, Teheran and Isfahan. She mostly purchased contemporary crafts, though she was also involved in the acquisition of historic artefacts. Her experiences and observations were recorded in By Road and River: Journal of Journeys in Persia and Mesopotamia, where she declared that “Never by any possibility could I experience greater or more delightful hospitality and kindness than I met with in Persia.” She eventually settled in Bath, donating her varied collection of textiles, metalwork, lacquer and ceramics to various institutions in the area.

The Holburne Museum is now open to the public and is delighted to be able to welcome visitors once again.

See some of our other Inside Art features: