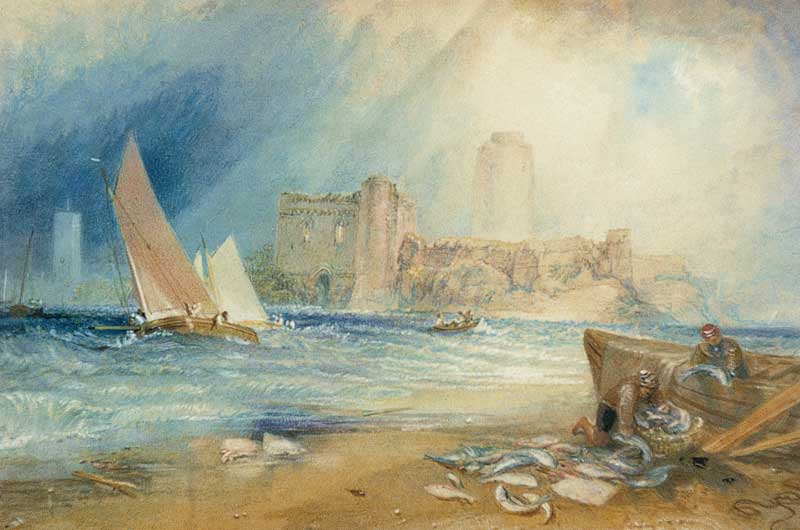 Here is a scene of majestic landscape grandeur with fisherman and boats going about their daily business, seemingly oblivious to its impact. Art curator and historian Monserrat Pis Marcos from The Holburne Museum explains the story behind JMW Turner’s painting Pembroke Castle, one of a series of watercolours he produced of picturesque views in England and Wales.

Two fishermen unload their catch from a boat moored on the beach. Other vessels of various sizes are still at sea. In the background, an imposing castle quietly defies the rough waters and the stormy skies as rays of sunlight dispel the threatening darkness of the clouds.

The growing fascination with open-air painting that spread across Europe in the 19th century found in John Constable (1776–183) and JMW Turner (1775–1851) two of its earliest champions. The allure of contemporary life, the aesthetic appeal of the countryside, the challenge of capturing nature directly – as opposed to in the studio – and the use of techniques and materials that allowed artists to work quickly and easily contributed to the development of outdoor artistic pursuits. Turner travelled extensively both in Britain and abroad, and his talent for producing topographical views was one of the cornerstones of his career.

The growing fascination with open-air painting that spread across Europe in the 19th century found in John Constable and JMW Turner two of its earliest champions.

This work is one of 97 watercolours that the artist produced – at thirty guineas each – for a series of 96 engravings. Entitled Picturesque Views in England and Wales, they had been commissioned in 1825 by the engraver, printer and publisher Charles Heath (1785–1848) who originally intended to include 120 plates; the project was cut short due to its limited commercial success.

The views recorded life in cities, villages and the countryside, and were published from 1827 to 1838. The watercolours were exhibited in 1829, 1831 and 1833. The last show, which took place at Moon, Boys and Graves in London, featured this piece. Turner based the views on preexisting material, with some drawings dating back to the 1790s, and on the sketches he produced during a specific tour he made for this commission in 1830.

The composition of this particular watercolour was inspired by a previous work of which two versions exist. These were exhibited at the Royal Academy in 1801 and 1806 and now belong, respectively, to a private collection and to the University of Toronto. It depicts Pembroke Castle, in Wales, and the publication describes the area and the castle in very romantic (and slightly romanticised) terms:

“It was anciently fortified and protected by a most magnificent castle, the vast remains of which still give it an appearance of uncommon grandeur … It is truly a noble ruin, and in some points of view is one of the finest objects that Wales can boast of”.

The watercolour highlights the sublime dignity of the ruined fortification, dramatically lit from above with almost blinding brightness.

The text praises the surviving splendour of this Norman site in its dilapidated state with a warmth akin to the way in which the watercolour highlights the sublime dignity of the ruined fortification, dramatically lit from above with almost blinding brightness. The past observes the daily routine of contemporary life, with boats and fishermen going about their business, oblivious to the impressive setting and its former glory. Too much enhanced greatness, perhaps, as one contemporary reviewer reportedly commented that the high-key colours were “terribly tropical, hot, hot all hot”.