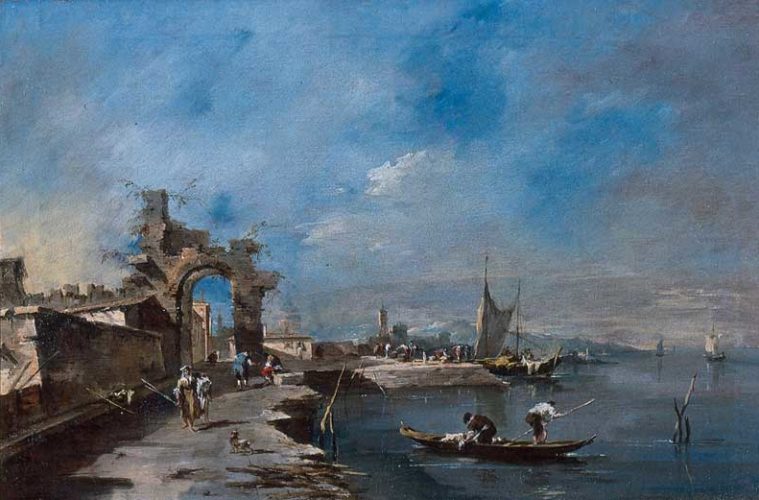 A ruined arch melts into the fresh blue sky smudged with white washes of cloud as people go about their business beside a Venetian lagoon – fishermen, a woman with a basket, a little dog. It’s definitely Venice… or is it? Art curator and historian Monserrat Pis Marcos from The Holburne Museum explains Francesco Guardi’s Coast Scene, Venice, which uses a style called cappriccio or capricci, which was highly fashionable in the 18th century.

This work was probably inspired by one of the small islands in the Venetian lagoon, not far from the sea. On the left, a wall punctuated by a ruined arch leads the eye diagonally into the painting. In the foreground various figures animate the scene: a woman carrying a basket, a little dog, two men in conversation and fishermen in a flat-bottomed boat. Further away, a few isolated figures and a group of people unloading another vessel are visible, while in the background various towers and the distant profile of mountains add depth to the composition. Recent conservation work unveiled a cupola to the right of the arch.

This painting belongs to a genre known as capriccio. In Italian the word capricci stands for whim or fancy; as an artistic term, it refers to a work – from a painting to a musical piece – that includes fantastical or capricious elements. In the visual arts, capricci tend to be fictitious topographical views, often rendered with painstaking detail. Although inspiration could be drawn from real settings and some buildings may be identifiable, the combination of architecture, figures and landscape do not match any specific location. Therefore, capricci can be fascinatingly intricate in their search for verisimilitude, and yet remain absolutely unreal. It was precisely this crossover between the technical skill to capture reality and the artistic genius to invent scenarios that made the genre’s fortune.

In the visual arts, capricci tend to be fictitious topographical views, often rendered with painstaking detail

Capricci became highly fashionable during the 18th century. These picturesque Italian vistas were popular with foreign travellers, who were eager to return home with an array of Grand Tour souvenirs. Their decorative qualities made them suitable for furnishing home interiors, being often commissioned for specific rooms. Capricci also appealed to the local clientele, who understandably were less interested in purchasing views of cities and monuments they had easy access to. The genre contributed to asserting the creativity and talent of famous artists such as Marco Ricci (1676–1730), Antonio Visentini (1688–1782), Giovanni Antonio Canal (known as Canaletto, 1697–1768), and Francesco Guardi (1712–1793).

While his early vedute were strongly influenced by Ricci and Canaletto, he progressively ventured into freer, more imaginative compositions in which he explored the interplay between light, sky and water through a looser brushwork, chiaroscuro effects and the manipulation of perspective

Francesco Guardi was born in Venice. He belonged to a family of artists, so in addition to his training with Michele Marieschi (1710–1743) he could have been apprenticed by his elder brother Giovanni Antonio (1699–1760). By 1730 the siblings had a studio in the city, which undertook commissions of all kinds. Francesco started out as a figure painter but around the mid 1750s, and particularly after the death of his brother, he turned to painting views of Venice and the surrounding area. While his early vedute were strongly influenced by Ricci and Canaletto, he progressively ventured into freer, more imaginative compositions in which he explored the interplay between light, sky and water through a looser brushwork, chiaroscuro effects and the manipulation of perspective.

The ruined arch that appears in this work is a characteristic feature of Guardi’s capricci. The motif was probably inspired by the dilapidated fortifications of the Serenissima and it creates both a classical and nostalgic atmosphere. In fact, British collectors from the 19th and 20th centuries prized Guardi’s views as melancholic tokens of the decay of Venice’s glorious past. Even during his lifetime, the artist was considerably more popular among foreigners than among fellow Venetians, which explains why so many examples of his prolific oeuvre can be found outside of Italy. Guardi was an influential figure for later artists such as JMW Turner (1775–1851) and Claude Monet (1840–1926).