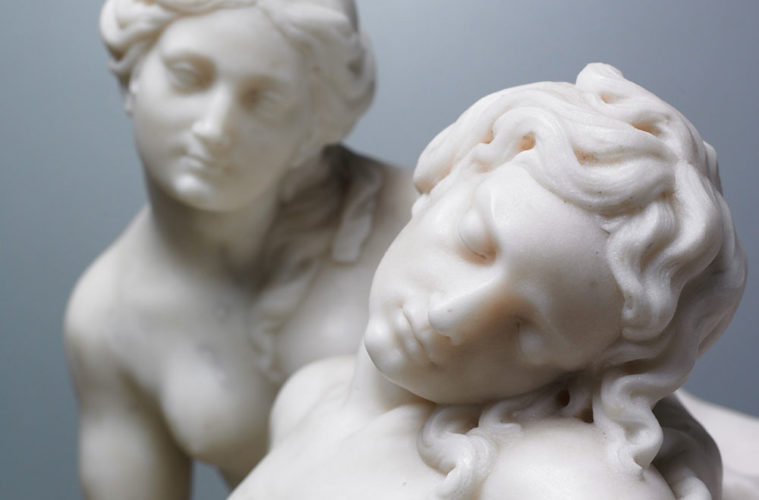 Inside Art: Diana and Endymion

Take a classical myth about a love that cannot be returned – that’s what Giuseppe Plura did in the 18th century with his marble study of Diana and Endymion.

Art curator and historian Monserrat Pis Marcos from The Holburne Museum explains the myth and how this sculpture gets to its essence.

On a rocky base, a recumbent youth lies asleep. A watchful dog at his feet, a staff at his side and a horn on the ground give him away as a shepherd. Behind him, a woman floats on a cloud above the moon, watching over his slumber. Two boys holding torches complete the scene.

The story portrayed in this sculptural group alludes to a classical myth. Diana, huntress and goddess of the moon, fell in love with the handsome Endymion, an ordinary mortal. The youth had been sentenced to perpetual sleep, so the goddess could only observe him as he lay on Mount Latmos.

The various versions of the myth offer different interpretations for Endymion’s fate. In some versions, the shepherd begs Jupiter to preserve his youth and beauty and the father of the gods, suspicious that Endymion may be having an affair with his wife Juno, obliges by making him sleep. In others, Endymion himself is given the opportunity to choose his destiny and he picks slumber to attain immortality. Other versions present Endymion’s sleep as a punishment for Diana, who had vowed to remain chaste and who is ultimately responsible for sending him into sleep when she kisses his lips.

Regardless of the catalyst, the outcome is unerringly tragic. The story has been traditionally associated with the notion of platonic love, so for all its elegance and serenity, this sculpture quietly represents a very human drama: the longing for a love that cannot be returned. Diana gently touches the shoulder and the right hand of the oblivious Endymion, creating an intimate atmosphere between the two figures. Incidentally, through her intent gaze the goddess is reversing two established gender roles in the visual arts, since men are more frequently assigned the part of the onlooker.

The torches held by the two putti are reminiscent of the bridal torch that Hymenaios, the Greek god of weddings, would carry when presiding over a nuptial ceremony. This emphasises the impossibility of the union while also reminding the viewer that Diana is the goddess of the moon – as shown by the little half-moon visible over her forehead – and that this scene is possibly taking place at night.

Giuseppe Antonio Plura was born in Turin, Italy. He was part of a family of artists and little is known of his education and early life. Between 1747 and 1748 he spent some time in Madrid, where he probably apprenticed under Giovanni Domenico Olivieri (1706–1762) while collaborating in the decoration of the royal palace. He settled in Bath around 1749, where he anglicised his name to Joseph. He probably worked as an assistant for Prince Hoare (1755–1834), who may have met the sculptor during his travels in Italy. He married Mary Ford, the daughter of a local building contractor, John Ford (1711–1767), Alderman of the City of Bath.

By 1753 Plura had set up his own studio, where Diana and Endymion took pride of place. The artist used the sculpture as a showpiece to display his talent and his skill at rendering different textures. He took it with him to London when he moved to Oxford Row in 1755. His plans to return to Italy in March 1756 were thwarted by his untimely death from a fever not long before his departure. The work is currently visiting the native land of its maker, as it has been lent by the Holburne Museum to an exhibition in Turin.

Purchased with grants from the Heritage Lottery Fund, the National Art Collections Fund, the Friends of the Holburne Museum, other charitable trusts and organisations, and private individuals.

Read Monserrat Pis Marcos other articles in this special series