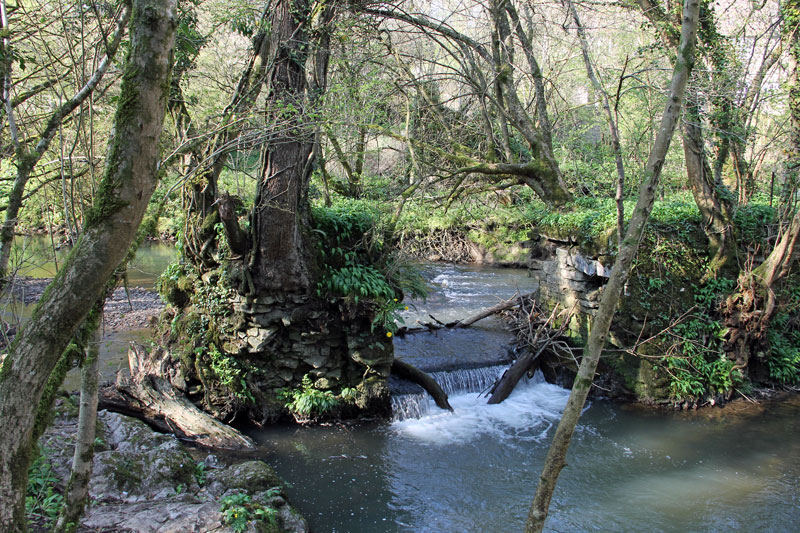 In the foothills of mendip

This is a 12 mile, six hour ramble exploring the fascinating countryside west of Frome. Starting by weaving through the back streets of Frome, with some of the oldest industrial housing in the country, it heads north through Orchardleigh to Buckland Dinham. After heading along a green lane, it drops down to the honey-stone village of Mells. From there it follows the fast-flowing Mells River, past some of the most impressive industrial ruins in Somerset and along old railway lines to visit a celebrated geological formation, before heading back to the starting point.

For refreshment, there is the choice of two country inns and a café, and, while the directions below start at Frome railway station, with a regular service to and from Bath, you can, if you wish, park in Frome’s cattle market car park and pick up the walk in the Market Place.

Leaving Frome station, head along the approach road, cross the main road and turn right. After 300m, turn left beside the River Frome and follow a path under two railway bridges, before turning left through Rodden Meadow.

At the end, follow a path under the railway and along Willow Vale, before turning left across Town Bridge. Cross at the pedestrian lights and carry on along the Market Place. At the end, carry straight on up Stony Street, turn right up Catherine Hill, continue along Catherine Street and bear right along the main road. After crossing the end of Castle Street, keep to the right-hand pavement, and take the second right along Selwood Road. After 200m, turn left along Trinity Street, left by Holy Trinity church and right along a lane.

Carry on as the lane dwindles to a path heading downhill, turn right along a road and left at a T junction. At the next T junction, cross and go through a kissing gate (KG), head over to a tarmac path and turn left. When the path ends, carry on along a track, go through a KG and a squeeze stile, and continue through a KG.

After crossing a railway line, head across to a KG and cross a stile on the other side of the road (ST772496). Carry on through a meadow, cross another stile and turn right along a lane. At the end, cross a stile and head up a track into woodland. Continue uphill, crossing another stile into a meadow, and, after crossing three more stiles, follow a rough track up to Orchardleigh Down.

The track across the down is confined between fences, except when it crosses a grass runway, where the prospect of light aircraft coming in to land introduces an unusual hazard. After crossing the runway, Orchardleigh House appears ahead.

After the path descends, you have the option of diverting to visit St Mary’s church, romantically marooned on a little island, before carrying on to the left of the buildings ahead and following a drive uphill. After it leads into a golf course, carry on for 250m before bearing left and left again to follow a drive heading west. After 350m, when it crosses a cattle grid, bear right, following a waymark across grass and into Orchardleigh Wood (ST768514).

Turn left past the old lock-up and right at the main road. After passing the Bell Inn, turn left along Sandscross Lane for 50m, before turning right along a green lane, which passes the ruins of a colliery built in the 1870s, but was abandoned before any coal was produced.

After 1,200m, when you come to a lane, turn right, and at a T junction turn left (ST738509). At the next T junction, turn left and head downhill to cross a bridge over an old railway line. After another 600m, when the lane turns left, follow a footpath straight on. In the corner of the field, bear left, and at the end bear right through a gap in the hedge towards Mells church. After going through the churchyard and along 15th century New Street, turn left, and, after passing the Lutyens-designed war memorial, bear right.

After passing Mells Café, carry on and take the second turning left, signposted to Great Elm. After 250m, turn right to follow a bridleway alongside the Mells River (ST733490). After 200m, you come to the ruins of Fussells Upper Works, built around 1800. Further on are the Lower Works, dating from 1744, which at its peak employed over 250 men. After 500m, bear right to follow a waymark for the Wyvern Way along a muddy track. After 250m, cross a footbridge to walk along the opposite bank.

After crossing another footbridge, you will see the railway line to Whatley Quarry ahead. Continue along the path, which crosses a lane before carrying on alongside the river. After about 100m you come to Great Elm Works, established by the Fussells around 1792 – now a private house. Further on are the ruins of Bedlam woollen mill.

When the path forks, take the path curving away from the river, following a waymark for the East Mendip Way (EMW). As you approach a short cutting hacked out of the rock in 1943 for a railway line, look to the left to see the cutting used by the narrow-gauge line it replaced.

Carry on across a metal footbridge, and, when the path forks, bear right, passing the ruins of two limekilns and a bridge which carried a tramway across the river. A little further on, the path leads across another bridge. Before crossing it, take a short diversion up to the left into an old quarry, whose rock face contains a geological formation known as the De La Beche Unconformity, after the man who discovered it, where the horizontal strata of sedimentary rocks sit on tilted layers of carboniferous rock (ST755491).

Retrace your steps, cross the bridge, and after 250m look for a waymark for the EMW, bear left along a narrow track and follow waymarks uphill through woodland. Cross a stile at the top, head across a paddock, cross another stile and continue along the track opposite. When it bears left, head up a grassy track and go through a KG. Carry on, and, after passing a gate (ST767485), cross the main road (to your left) and turn right. After 100m, turn left down Whatcombe Road and first right up Upper Whatcombe. Carry on, and, when the road swings left, carry on up a path.

Continue along a lane, and, when it bears left, continue along York Street. Turn right along Selwood Road and left along Vallis Way, before taking the third left down Catherine Street and retracing your steps through the town centre to the station.