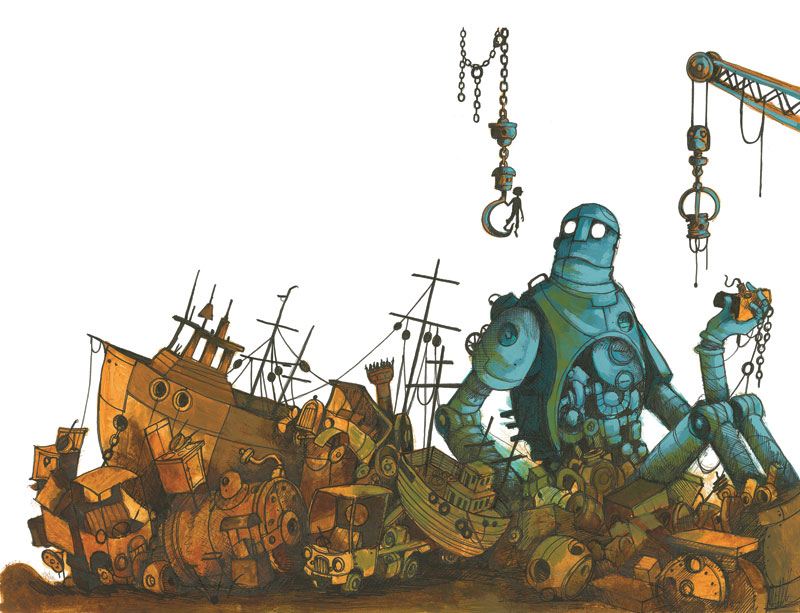 In Search of Monsters

Now that we are unfazed by QR codes, new experiences are coming our way. In Bath it’s all about illustrated monsters who have escaped into the city. Dr Matt Freeman explains to Emma Clegg how an exhibition can be brought to life on the streets.

Christmas is full of myths and monsters – from St Nicholas, Twelfth Night and Three Wise Men to Krampus, Gryla the troll, and gremlins. Children’s stories and films more generally are also populated with both threatening and benevolent monsters – including the Grinch, Shrek, Golem, Monsters Inc and The Wicked Witch of the South, these narratives help young people to define the idea of good and bad, morality and unkindness. They also show that monsters can be friendly, too, teaching enquiring minds that an offputting or non-beautiful exterior can hide the warmest of hearts.

So if you’re in search of monsters at Christmas and beyond – and why wouldn’t you be? – visit the Victoria Art Gallery’s Myths and Monsters exhibition, which runs until 27 February, a follow-up to the gallery’s 2017’s blockbuster Here be Dragons. Organised by Gill McLay – co-founder of the Bath Festival of Children’s Literature and Events of Wonder and owner of Bath Literary Agency – the exhibition includes over 20 of the biggest names in book illustration – including Axel Scheffler, Michael Foreman and Cressida Cowell – and their monster creations.

But you may also need to bring your detective hats because this isn’t just an exhibition within four walls – you see, the word is that instead of staying obediently in the gallery, some of the monsters have escaped into the city, and so visitors are being asked to help search for monsters on a free immersive trail around Bath.

The city trail has been developed by Dr Matthew Freeman of Immersive Promotion, based at Bath Spa University. Set up in January this year, the company came about because Freeman had been working on some university projects to boost creative industries in the region and investigate how creative technologies could enhance or create new media experiences.

“Immersive was something that a lot of people were starting to think about, but it became very clear that these sorts of technologies are potentially very exciting, but they are not generally widely known. The challenge was finding how to communicate that potential to a layman and this turned into a project.

“The first thing I realised was that the way these sorts of experiences tend to be marketed is with a focus on video gamers and on men. So I spent a couple of years working on how to communicate something that is quite magical but also intangible. It’s one of these things that when you try it you get it, but it’s hard to get across.”

Setting up the company was the obvious next move for Freeman because there wasn’t anyone else doing this.

AR is the perfect way of bringing a digital, artificial virtual creature into the world in a
way that is fun and accessible

“There are a bunch of people in the immersive sector that are not focused on audience development because they are technology and development focused. Then there are a whole bunch of advertising agencies who lack expertise in marketing immersive experiences because it’s so new. So the company fits in the middle between those two worlds.”

Another crucial insight was that there was a definite market for VR (virtual reality) experiences, but budgets within the sector were invariably small. Which led to the question of how immersive technologies can be used to market other experiences. Freeman’s immersive expertise has already been applied to the University of Bath: “We want to create an open-day experience for prospective students using immersive media. So we’re creating a simple video of a student, like a day in the life, but using 360-degree spacialised sounds, so it creates the feeling that you are actually in the video, walking around the campus. The technology makes use of mobile phones and sound and AR (augmented reality), all things that are second nature to young people, so it makes sense to use that language to try and communicate what a university is.”

Immersive Promotion is also developing a project with the House of Frankenstein in Gay Street, where an immersive approach – already used in the venue with the stimulation of visitors’ senses with sounds and smells and visual spectacles – is part of their long-term plan.

The Myths and Monsters project was a way of giving a new dimension to the famous storybook monsters in the exhibition. Freeman explains, “What if the monsters all escaped around Bath? What if they were all on the loose? If you’re a family you’ve got to go and find them, track them down and get them back into the gallery before they cause any more harm. So I suggested we use AR because it’s the perfect way of bringing a digital, artificial virtual creature into the world in a way that is fun and accessible – because people can just use their phones. So the technology is inclusive and an art exhibition can be brought to people rather than requiring people to visit.”

There are five or six monsters to find and the time it takes depends on how quickly you can decipher the clues, which will be buried across the Victoria Art Gallery website and social media. “Once people find out where they are hidden in locations near the gallery, they will find posters to scan on their phones – after which the monster will step out of the poster and come alive on the phone. You can take pictures of the escaped monsters, and even take a selfie with the monster.”

“The end of the trail points you towards the actual gallery and more QR codes and then, instead of seeing the monsters, you become the monster, and it blends into your face.”

I take your word for it, Dr Freeman. It sounds like magic to me, but even I can scan a QR code.

Myths and Monsters is at the Victoria Art Gallery until 27 February 2022. Tickets £2–£6. victoriagal.org.uk; immersivepromotion.com