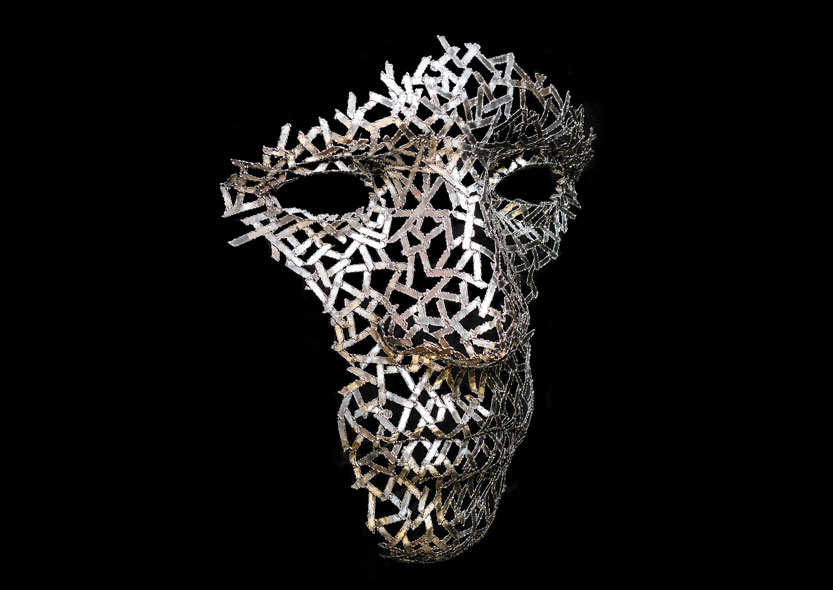 A new solo exhibition by Rick Kirby, one of Britain’s leading sculptors, has opened at Bath Contemporary gallery

Many of us will be familiar with the sight of one of Rick Kirby’s distinctive giant faces gazing out at us from inside the Bath Contemporary gallery in Gay Street. This month the gallery is pleased to present a second solo exhibition for this prominent contemporary British artist.

The steel sculptor is best known for his vast array of monumental public commissions across the UK. With prominent positions including the south bank of the River Thames opposite the Houses of Parliament, and the new Marlow Theatre in Canterbury, Kirby’s distinct style is instantly recognisable. Closer to home, a commission in Calne, Wiltshire, was unveiled by the Queen and we can see another of his pieces at Portishead Quays.

Kirby’s figurative sculptures are made from hundreds of welded steel plates and discs, transforming industrial materials to convey movement, elegance and grace. A strong theme of guardianship runs throughout Kirby’s work; his figures leave one with a sense of safety and comfort as they sit patiently, quietly witnessing the world around them. Kirby’s success as a sculptor comes largely through his ability to express a sense of universal experience and the strength of human unity. Multiple figures often hold hands, or support each other as a balanced structure; single figures often seem to soar upwards with ease and optimism. Other examples of Kirby’s work include large segmented faces, often relic-like in appearance. Although monumental in size, they do not dominate their settings, but instead calmly watch over their environment with an air of gentle theatricality.

The precision and detail, particularly of these large pieces, echoes the symmetrical accuracy of classical sculpture; Ancient Greek, Roman, Renaissance – Kirby’s sculpture extends through the centuries of cultural history and the vastness of time, connecting us in a direct yet tranquil manner, with an air of myth, legend and story-telling.

Kirby doesn’t often create large volumes of smaller gallery pieces. This is a rare opportunity to view and acquire Kirby’s work suitable for a domestic or corporate setting from an internationally recognised sculptor. Kirby was born in 1952 in Gillingham, Kent and began his art education at the College of Art in Somerset, followed by a degree at Newport School of Art. After graduating he taught art for 16 years and it was during this time that his leaning towards sculpture evolved. Initially working in stone, Kirby’s practice moved towards steel while sharing a studio with a fellow artist, a medium that continues to resonate with him today.

Rick Kirby: Face to Face runs from Friday 2 – Saturday 24 June at Bath Contemporary. Kirby’s sculpture will be complimented with an exhibition of landscape paintings, including work by Kristan Baggaley, Alina Maksimenko, Ellen Watson and Claire Wiltsher.