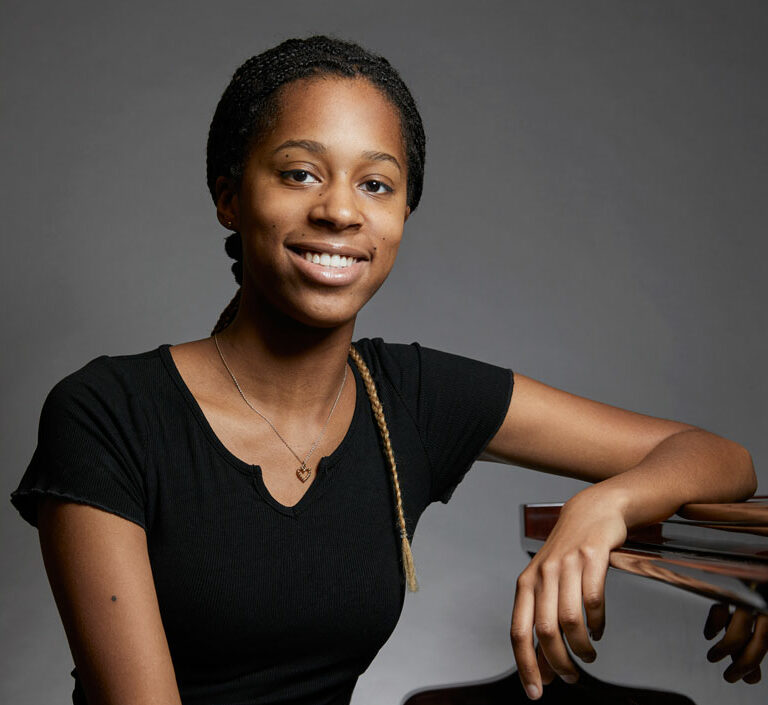 Holding the keys: in conversation with musician Jeneba Kanneh-Mason

Once upon a time there were seven children who were all talented musicians and they were all part of the Kanneh-Mason family. Melissa Blease talks to the fifth one, Jeneba Kanneh-Mason, who is playing a piano programme at The Bath Festival featuring Bach, Mozart, Scriabin and Liszt.

“There was maturity in performance and interpretation, that latter instinctive, the former an uncanny phenomenon. Effortless, yes. Impressive, even more so – and exciting is probably an understatement.” Garry Fraser, The Chronicle, Australia. “The sheer freshness and command of her playing swept all competition aside.” Colin Clarke, Seen and Heard International. “With a deft and expressive soloist in this 19-year-old, the work seemed to grow beyond the sum of its parts.” Fiona Maddocks, The Guardian. Great reviews, yes?

On 17 May, you can find out what all the critical fuss is about when Jeneba Kanneh-Mason visits Bath as part of the Bath Festival to perform a piano recital that brings Bach’s Prelude and Fugue C sharp Major, Mozart’s Piano Sonata No 18 in D Major K576, Scriabin’s Piano Sonata No. 2, Liszt’s Vallée D’Obermann and Liszt’s Hungarian Rhapsody No. 2 together on one perfect programme in the beautiful surroundings of the Holburne Museum. “Classical Music Rising Star!”, the programme says.

Oh, Jeneba: is it stressful to have such acclaim – yet alone great expectations – thrust upon you? “It’s a bit nerve-wracking, yes… but in a good way,” she says, in what I quickly learn is ‘typical’ Jeneba understated fashion; “the best thing I can do is just be prepared, and ready for whatever happens on the day.”

I’m really lucky to have six musical siblings; we all support each other and play together as well

When it comes to preparation, you could say that Jeneba has been preparing for every recital that she does all her (young) life. Let me introduce you to the Kanneh-Mason clan, the eldest being 25-year-old Isata. Next one down is Braimah (24), then there’s Sheku (22), who came along a year ahead of Konya, followed by Jeneba (who turned 19 this year). Three years behind Jeneba, there’s Aminata, and the youngest of the bunch is 12-year-old Mariatu. And all of them – yes, all of them – play either piano, violin, cello or a combination of all three… to an exceptionally high standard.

Thanks to mum and dad’s influence (Stuart and Kadiatu, a business executive and former university lecturer respectively), the Kanneh-Masons grew up listening to all varieties of music from reggae and rock to rap, blues, country and western – and, of course, classical. But, while Stuart and Kadiatu supported their children every step of the way towards the brilliant careers they’ve all established, they could never be accused of being the dreaded ‘pushy parents’.

“My parents always loved music,” says Jeneba. “They played at school age to Grade 8, but then they went on to do English and Maths, and other things. But when they started my eldest sister Isata on the piano, we all just followed on, and what we do today grew organically within the family. All I know about how we got here, like we are, is that I’m really lucky to have six musical siblings; we all support each other and play together as well, which is really great.”

In 2015, those siblings (minus Mariatu, who was too young to participate at the time) moved Simon Cowell to label the Kanneh-Masons “probably the most talented family in the world” after the Chineke! Junior Orchestra’s medley of Tchaikovsky, Prokofiev and Clean Bandit (yes, Clean Bandit!) won UK hearts and minds in the Britain’s Got Talent semi-finals performance.

The family went on to win numerous awards collectively and individually, and performed at several prestigious events and venues including the BAFTA Awards ceremony in 2018 (the same year in which the family’s award-winning album Carnival was released and Sheku Kanneh-Mason performed at Prince Harry/Megan Markle’s wedding) and the 2019 Royal Variety Show. In July 2020, BBC One screened Imagine: This House is Full of Music, an intimate portrait of the Kanneh-Mason family in lockdown filmed over the course of one day. In the same year, Kadiatu published her memoir House of Music – Raising the Kanneh-Masons, which went on to win the Royal Philharmonic Society’s Storytelling award. Was Jeneba born to live a life in the spotlight?

“It never, ever felt – or feels – that way, for any of us,” she says. “Nothing of what we do was ever ‘forced’ upon us – it was more like we all just went along with how much we were improving. We were always looking to each other for support and inspiration, but never in a competitive way. We’re a very close family, and we all love what we do. And there are highlights, all the time; performing French composer Camille Saint-Saëns’ Carnival of the Animals at the Proms last year was one of my favourite moments so far, but I know there are many more highlights to come, for all of us.”

Jeneba has already won a clutch of awards, including the 2014 Murs du Son Prize at the Lagny-Sur-Marne International Piano Competition in France, the Nottingham Young Musician Award 2013 and the the Iris Dyer Piano Prize at The Royal Academy of Music Junior Academy, and played numerous concerts in England, Wales, Paris and the Caribbean as a recital and concerto soloist and as a chamber musician. And yet she is still a student, holding the Victoria Robey Scholarship to The Royal College of Music where she studies piano with distinguished concert pianist and one of today’s most eminent piano professors, Vanessa Latarche. Jeneba: do you have time to live the ‘student life’?

“I’m in my second year at the Royal College of Music and I live with other musicians who are at the same studying stage as I am, which is really nice because we’re all in the same environment, working towards similar goals,” she says. “I’d say I’m ambitious, for sure – we all are! But I have plenty of time for creativity too, and I’m good at having fun during my downtimes. There are periods that are busier than others, but of course we try to relax, hang out together and generally just chill out, just like any typical students!”

Typical… but with several Big Gigs to fit in to the schedule. How does Jeneba choose when she’s playing live – and select what she’s playing? “It’s a combination of my choice and my piano teacher’s choices, and close consideration of what would work in a particular concert programme,” she explains. “I have the final choice of what I would hope to play, and The Bath Festival selection is perfect for me and, really importantly, accessible to everybody. The music really speaks for itself; I don’t think that there’s anybody who wouldn’t love it, even if it’s the first time they’ve ever been to a classical music concert.”

So: Bath this month. Where next – and what does the future hold? “I don’t know if I have a specific career goal; I just want to keep on performing music for as long as possible, throughout my life,” says Jeneba. “The dream venue, for me, would probably be Carnegie Hall! But at the moment I concentrate on the now.” And right now, what Jeneba does summarises the very epitome of music to our ears.

Jeneba Kanneh-Mason is playing at the Holburne Museum on 17 May at 11am. Tickets £15; bathfestivals.org.uk