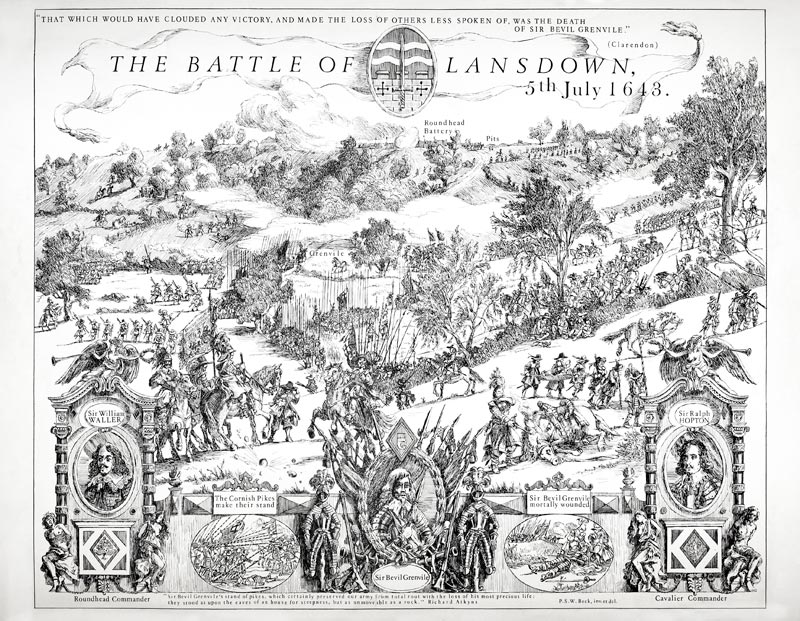 History: The Battle of Lansdown

This year is the 375-year anniversary of the Battle of Lansdown Hill, which took place during the English Civil War. Historian Catherine Pitt uncovers the development of the battle and identifies opposing personal loyalties behind the military displays of warfare…

As dawn rose on 5 July 1643, just five miles outside of Bath two armies faced each other on the surrounding hills. These weren’t foreign armies, but ordinary men, brothers and friends, torn apart by a parliamentary conflict created by the king, Charles I, and Oliver Cromwell. These armies were led by two generals, men who had once been friends and who would still have been if the political circumstances hadn’t divided them. In the words of Sir Thomas Knyvett in 1644: “Now there is so much declared as makes all officers in the Kingdom traitors of one side or the other.”

The English Civil War was a battle of wills and ideologies – political, religious, social and economic. The king believed in his divine right to rule absolutely, and used parliament as a tool to enable his orders. Cromwell and his Puritan parliamentarians believed that the government and the religious systems of the day needed some drastic reforms.

“In June 1643, Bath was in economic flux. On one hand there was a decline of the weaving and wool industry; on the other the healing thermal spring waters were bringing in the leisured, and moneyed, masses to the town”

Civil War was officially declared by the king on 22 August 1642 in Nottingham. By November the same year the king had retreated from London to Oxford after being overwhelmed by the parliamentarian support in the capital.

As Civil War was declared, the Somerset Assizes were taking place in Bath. The county’s highest officials were present in the town (as Bath was then) and as such could declare almost immediately that the county was, in the majority, for parliament’s cause.

England in the 1640s had no retained army at the king’s (or parliament’s) disposal. The swift decision on which side the county supported gave valuable time for the upper classes to plan ahead and gather men and form armed regiments.

Bath had a large Puritan community mainly due to its weavers and merchants, many of whom had fled religious persecution in Europe in the 16th century. There were however political divisions in office. Henry Chapman, a Royalist, sat on Bath Council with his brother-in-law Matthew Clift who supported parliament. Other relations to Chapman also stood for varying factions. The officials in Bath loyally put duty before their personal beliefs and Bath therefore continued to function fairly normally during these exceptional circumstances with weekly markets and regular council gatherings.

Bath in the early 17th century was a small town of around 2,000 people, most of whom were contained within just 24 acres inside medieval gates and walls. There were some peripheral inhabited areas such as Broad Street where the weavers lived, and parishes such as Walcot, Widcombe and Twerton.

Bath was the gateway to and from the west country, a strategically important crossroads for both river traffic and road. The Fosse Way from Exeter led through to the Midlands, the Via Julia from South Wales and the main London to Bristol road passed through it too.

A healthy army was important and Bath had fresh water springs that supplied the population with uncontaminated water, keeping disease at bay. Other natural resources, food and grazing land made Bath a key site. The local authorities tried to recompense locals for their losses but for some, like Bath butcher John Russell, who had supplied the garrison with beef at a cost of £3.10s.0d (more than £300 today), it wasn’t until the war had ended, after much petitioning, that he got paid. 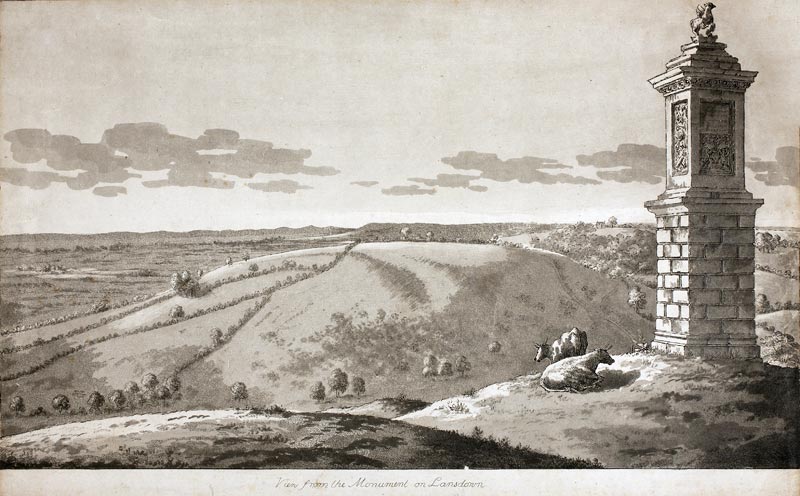 The monument on Lansdown c. 1760, built in 1720 in memory of Civil War commander and Royalist Sir Bevil Grenville

In June 1643 Bath was in economic flux. On one hand there was a decline of the weaving and wool industry; on the other the healing thermal spring waters were bringing in the leisured, and moneyed, masses to the town.

The war, however, had put a temporary halt to Bath’s development as a spa resort. The lodgings built to accommodate the growing numbers of spa seekers were now used to billet uncouth and boorish soldiers. This influx doubled Bath’s population. Soldiers occupied any available spaces including churches and the Abbey, and the baths were used to help cure the army’s injured. There was a fear that bored and underpaid troops would cause havoc and disruption to Bath. The Mayor, John Biggs, in 1646 wrote: “We have now 400 in the town and many more coming… God protect us from pillage.”

Money was constantly demanded from the population, by both king and Cromwell, for soldiers’ pay and upkeep. Bath seems to have been spared the worst of troop behaviour, unlike the ransacking and burning of buildings at Gloucester. The only visible damage that can still be seen today occurred during the Royalist occupation of Bath (1643–1645) and was to the effigy of Waller on his first wife’s tomb in Bath Abbey, which had been deliberately defaced.

In preparation for war, the walls and gates of Bath were repaired and strengthened where required. The local militia trained just outside the walls on drilling meadows like Butt Hayes which lay just outside of the West Gate. Bath’s armourer, John Gray, was instructed by the corporation to ensure that the arsenal kept at the Guildhall was kept in good working order.

After the Battle of Stratton (16 May 1643), which saw victory for the Royalists in what had been a parliamentarian Cornwall and Devon, both armies began to move north. The Royalists under Hopton aimed to take control of the South West on the way to Oxford where they would join forces with the king and march on London.

Cromwell’s Roundheads tactically withdrew northward in the hope of protecting the rest of the counties in the West. Waller arrived in Bath around June. By this point Hopton had captured Taunton and Wells and was heading toward Waller.

Waller had suffered heavy losses to his infantry at Stratton, so asked General Fiennes at Bristol for reinforcements. Fiennes sent Waller only 500 men, which meant Waller was short of 2,500 compared to Hopton’s 4,000 foot soldiers.

On 2 July Hopton and his Royalist army had taken Bradford on Avon and were breathing down Waller’s neck. Waller headed to Claverton Down, just two miles from Bath, where pockets of both armies clashed in skirmishes. Hopton realised he wasn’t going to get into Bath via this route so decided to head north so that he could take it from a different position.

Waller, anticipating the Royalists’ move to higher ground, marched his men and artillery to Lansdown Hill, five miles north of Bath, where on 4 July he ordered his troops to build earth and stone defences at the summit. As dawn broke on 5 July, Hopton had positioned himself and his troops on Freezing Hill, just opposite Waller’s army. Here these two men stood as enemies rather than as friends.

Three weeks before the battle commenced, perhaps in anticipation of its inevitability, Waller wrote to Hopton expressing his regret at the situation. We don’t have Hopton’s reply, if any, to this letter. “God…knows with what a sad sense I go upon this service and with what a perfect hatred I detest this war without an enemy…we are both upon the stage and must act those parts that are assigned to us in this tragedy…whatsoever the issue be, I shall never willingly relinquish the dear title of your most affectionate friend.” [Sir William Waller, 15 June 1643]

“Under a volley of artillery fire from above, the pikemen began to make their slow but determined ascent up Lansdown Hill, followed by the infantry and artillery”

For around two to three hours the armies faced each other. Small pockets of cavalry and infantrymen were sent out to scout. There were a number of skirmishes but this just heightened the tension. Hopton decided that although he was at an advantage with numbers the escarpment up Lansdown Hill was too steep to risk his troops on.

Eyewitness soldier Richard Atkyns wrote it was as “steep as the eaves of a house.” Woodland also protected Waller either side giving cover for his musket-men. Hopton began to withdraw his troops to nearby Marshfield. Seeing this, Waller ordered an attack. This move caused chaos and confusion to the Royalist cavalry. However, a regiment of Cornish pikemen under the command of Sir Bevil Grenville held their ground until the cavalry had regrouped.

Seeing his troops engaged in battle, Hopton ordered his men to push on toward Lansdown Hill. The Cornish pikemen were flanked by the Royalist dragoons and cavalry. Under a volley of artillery fire from above, the pikemen began to make their slow but determined ascent up Lansdown Hill, followed by the infantry and artillery. As they reached the top of the escarpment they were faced with the full force of the parliamentarian arsenal.

Through the smoke, blood, flying limbs and earth, the Royalists kept pushing onwards. Grenville’s pikemen formed a defensive stand and held back three counter-attacks by Waller’s Cuirassiers (known as the Lobsters due to their full-length armour plating) under the command of Sir Arthur Haselrige. During the third and final attack. Grenville was mortally wounded – it is his monument seen today at the battlefield site.

Faced with the full might of Hopton’s Royalist army, Waller tactically withdrew his army back a few hundred yards behind a stone wall. Fighting continued. Only darkness prevented the battle continuing. Although Waller had suffered much fewer losses than Hopton’s army, his army was still at a statistical disadvantage. Under cover of night Waller headed with his army back to Bath, leaving behind burning wall torches to emulate an encampment. Hopton discovered the trick in the morning, but it was too late.

Although neither side had declared victory, Hopton chose not to pursue Waller into Bath. The number of dead sustained by the Royalists meant his army needed time to recover and fresh recruits sent in. Hopton also found himself seriously injured by a huge ­­­gunpowder explosion on 6 July.

Waller sent word that Hopton could make use of the spa waters in Bath for his injuries, but this was ignored and Hopton moved his troops towards Chippenham. The two generals faced each other again a few days later at the Battle of Roundway near Devizes (13 July 1643) which ended with the Royalists definitively victorious.

Hopton headed to Bath to take control. The gates were opened with little resistance. Just as before, the corporation got on with the daily matters at hand regardless of which army held the town. After the execution of Charles I in 1649, Hopton chose to flee to the Continent where he died in 1652. During Cromwell’s Protectorate (1653–1658) Waller changed his allegiance and eventually became one of the men who helped negotiate the return of the monarchy in 1660. Despite its declaration for parliament in 1642, Bath became one of the first places in England to declare for King Charles II upon the restoration of the monarchy in 1660. ­