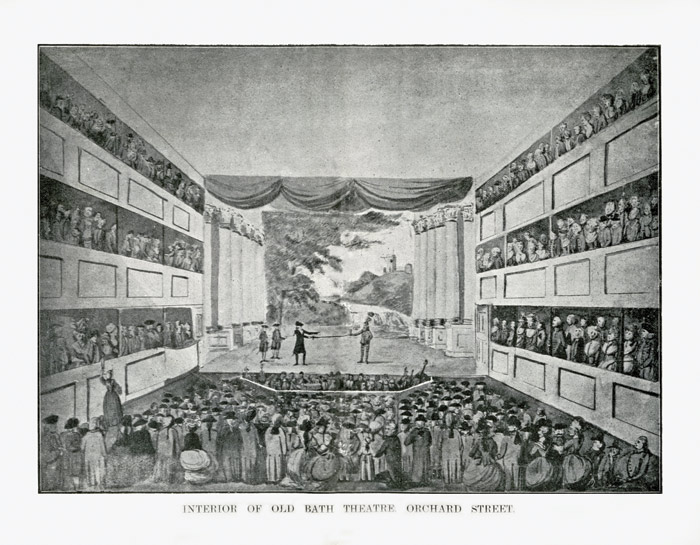 Hidden down a back street of Bath there stands an unassuming building. An incongruous bronze wall plaque is the only clue to the secrets that lie beyond. Here, behind the pedimented doorway, in what is today a Freemason’s Lodge, lies Bath’s original Theatre Royal – the Orchard Street Theatre.

This is the 18th century theatre that Jane Austen and Thomas Gainsborough knew; the theatre where William Herschel conducted. This is where great actors and actresses like Sarah Siddons and John Henderson began their careers; and where they performed the plays of local luminaries such as Richard Sheridan and Hannah More.

For travelling performers who came to Bath in the early 1700s, they had to make do with local hostelries, inns or hire rooms to put on their productions. A number of temporary theatres were eventually set up, including one where The Royal Mineral Water Hospital stands today, and one within the Lower Assembly Rooms on the Grand Parade. However, Bath had yet to match the expectations or requirements of the ever growing number of visitors from London Society.

In 1747 an actor, John Hippesley broached the subject of a permanent theatre for Bath. On the edge of ‘The Ham’, the river Avon’s flood plain, but near to John Wood’s new Grand Parade, it was decided that Orchard Street was a perfect central location to build.

The plan was set out: “Sixty feet long and forty feet broad: it was to front Westward to Orchard Street”.

The theatre’s design is attributed to the architect Thomas Jelly, and was completed by local builder Henry Fisher. Its cost was over £1,000, with much of the money raised through investment. Those who invested included John Wood himself, and the Master of Ceremonies for Bath, Richard ‘Beau’ Nash. For £50 one received 20 shares in the theatre and a Silver Ticket. This ticket admitted the investor to all performances except benefit nights, and delivered a modest dividend per annum.

Hippesley was not to live to see his idea come to fruition, but the project was completed under the management of John Palmer, a local brewer and chandler. Bath’s first purpose built theatre opened its doors to the public on 27 October 1750 with a performance of Shakespeare’s Henry IV, Part II.

The first few years of the theatre’s life were not without trouble. It had to vie for audiences with the Lower Assembly Rooms, then under the management of a Mr Simpson. After six years of struggle, it was the Orchard Street Theatre that won out, assisted partly by Beau Nash’s influence in swinging society’s favour towards Orchard Street. In 1756 Palmer bought Simpson’s theatrical “rights” for £600, and thenceforth enjoyed total monopoly in Bath.

Palmer ran the theatre with his son, John Palmer Junior. It was Palmer Junior who secured the theatre’s fortunes, for in 1768 his petition for a Royal Licence to perform plays was accepted. The Orchard Street Theatre became the first outside of London to be named a Theatre Royal. Bath was no longer just a “nursery stage” for London’s Drury Lane and Covent Garden theatres. By the end of the 18th century a season performing at Orchard Street was seen as essential for any London actor.

Palmer Junior ran the Orchard Street theatre in tandem with the King Street Theatre in Bristol (now the Bristol Old Vic). To enable his acting troop and their luggage to travel swiftly between the theatres Palmer created two extra-long coaches, known as caterpillars, for their use. These fast coaches were duly noted by the Mail coach services which at the time were much slower; so much so that by the 1780’s Palmer Junior was in the employ of the Royal Mail. By 1785 the theatre was in the hands of William Keasberry and a local actor, William Wyatt Dimon, who oversaw its final years.

Daniel Defoe wrote: “The Playhouse here (in Bath) is elegant and commodious and retains a company of comedians very little inferior to those which I have seen in London.”

Today when you enter the Orchard Street Theatre you are met with an entrance lobby, which was added during 1774 improvements. The earlier original doors to the theatre still remain, though within the building rather than outside. From the lobby you walk into another 1774 extension – the Crush Bar. Aptly named, for this was where almost 1,000 theatregoers could mingle and obtain refreshments.

Going to the theatre in the 18th century was a different experience to the one we enjoy today. No sitting in reverent silence. In the 1700s a theatre was a place to see and be seen. There was no low-level lighting; both the stage and audience were brightly lit by hundreds of tallow fat candles. It was also quite usual to have seating upon the stage. These were the best seats in the house, but the actors did have to put up with theatregoers talking across them or walking on stage mid-performance.

An evening at the Orchard Street Theatre would have also been much more intimate in feel than today. In the Pit the upper classes would mingle with courtesans, jeering at the actors, or flirting and gossiping with each other. Boxes were the privilege of the ladies of class and the aristocracy, but high above them would have been the galleries, where the middling classes were crammed, observing all going on below.

Theatre performances in Bath during the Season (November to June) started at 6pm sharp, on Tuesdays, Thursdays and Saturdays. Tickets went on sale around 3pm, and in 1750 cost 3 shillings for a box, 2 shillings for the pit, and admittance to the first and upper galleries cost 18 pence and a shilling respectively. Those that could afford to sent servants to reserve their seat.

The plays chosen for 18th century theatre would have certainly differed from what we watch today. Although Shakespeare was incredibly popular, it was not unusual to adapt and rehash his works. Melodramas were also very popular especially it seems by contemporary accounts in Bath. Often the main play was followed by a small vignette, farce or variety, musical and dance acts. Bath once enjoyed the delights of ‘Signor Rossignoi and his bird imitations’, ‘Moses Kean, a one legged entertainer’ and the rather mysterious sounding, Phantasmagoria.

The style of acting was also vastly different. The set of columns that dominate the Orchard Street stage appear to block audiences’ views, but when you consider that in the 18th century the emphasis in acting was more on the spoken word, while movements were restrained, these columns do not seem so out of place. Walking into the auditorium at Orchard Street today it is hard to imagine the crowds, smells and noise 265 years ago. Yet, look closer and there are echoes of the past everywhere. Around the walls there are the ghostly imprints of the boxes and galleries. Behind the stage are the original scenery hangings, and to the left of the stage there is an extant Georgian box, the original key still poised to turn the lock.

As the population of Bath grew, and the city began to expand north-west towards The Royal Crescent, the Orchard Street theatre began to struggle. It couldn’t expand to accommodate the growing audiences and by 1800 its location was considered unfashionable.

On 13 July 1805 the curtain fell for the final time. The New Theatre Royal in Beaufort Street opened its doors in October the same year. Over time the old theatre was partly dismantled; firstly to accommodate a Catholic Church and then a Freemason’s Lodge. Yet the footprint of Bath’s first purpose built theatre remains today, a hidden treasure of the city, but one that you can explore and enjoy.