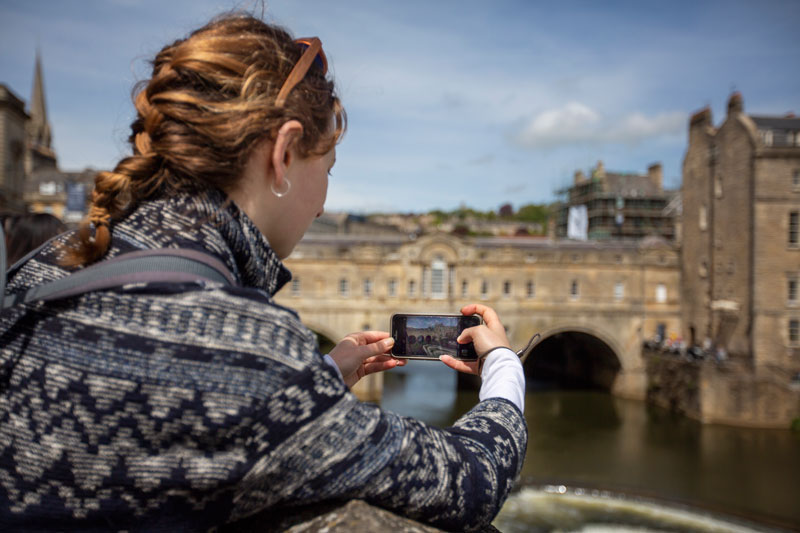 Postgraduate students at Bath Spa University have collaborated with BRLSI to create a pioneering app, introducing new audiences to little known histories of Bath. From Darwin to the dinosaurs, Millie Bruce-Watt discovers more…

From its healing waters and medieval heritage to its social scene and stunning architecture, Bath has been attracting visitors to its streets for millennia. The city’s history is not only well-documented in our museums and galleries, but its times of prosperity and moments of tribulation are also etched into Bath’s urban fabric. For residents, these fascinating details of times gone by are easily overlooked as the old has become flush with the new.

In an attempt to change this, and introduce new audiences to these often unknown histories of Bath, a team of five postgraduate students and two tutors at Bath Spa University’s School of Design have collaborated with curators at Bath Royal Literary and Scientific Institution (BRLSI) to design a revolutionary new app.

Here is an introduction to BRLSI’s Bath Discovery Trail – an interactive walking app that takes you on a series of 90–120 minute tours around the world heritage sites, all while shining a light on the city’s hidden features and unlocking the largely unknown stories behind BRLSI’s incredible collections.

The team have designed four trails to explore – The War Crosses, On the Origin of Species, The First Meteorite and The Railway Leviathan. Each trail places one of BRLSI’s 150,000 artefacts at the centre of its narrative. Whether it be relics of the Crimean War, Leonard Jenyns’ own copy of Charles Darwin’s On the Origin of Species, a 4.2 billion-year-old meteorite, or the skull of a Jurassic steneosaurus, the local stories unfold in 12 steps. Each step reveals a new chapter, a set of simple directions and a playful picture challenge for you to complete along the way. All the trails finish at BRLSI’s home in the heart of the city, and, most impressively, the artefacts will be on display for all to witness in wonder.

“Did you know about the Jurassic creatures found here? Or that Bath was once considered the cradle of English geology?” read the opening lines on the app’s stylish homepage. My answer was an inquisitive no to all the above, and so, naturally, I was intrigued…

Hitting start
On a warm summer’s day, I hit ‘start’ on Trail 2: On the Origin of Species. “Learn about one of the world’s most important scientific books through the lens of a very local friendship,” it read. “Charles Darwin spent his life gathering data based on his observations of animals and plants, which would lead to the development of the theory of evolution. This trail explores the lifelong friendship between Darwin and Leonard Jenyns, who lived here in Bath, through a correspondence that reveals a shared love for natural history and intellectual curiosity about the natural world.”

Jenyns’ contribution to the intellectual life of Bath is now commemorated by this sculpture, created by Patrick Haines as a commission for Crest Nicholson as part of the new Elizabeth Park. I was interested to learn that Haines consulted with BRLSI while preparing his design where he imagined Jenyns and Darwin sharing a seat and a conversation.

From there, the app guided me along the River Avon Walkway, where Darwin and Jenyns would have once spent many hours recording the wildlife, bonding over their discoveries. As I crossed over the river and re-joined the towpath at Churchill Bridge, the app revealed its true brilliance and drew my attention to dates carved into the stone wall. As it transpired, these were the dates of Bath’s great floods and, although this was an important chapter in Bath’s fairly recent history as the city was once plagued by deluges of biblical proportions, this fascinating feature would have been easily missed without the assistance of my smart pocket guide.

The trail continued to lead me down the river, drip-feeding me facts about the HMS Beagle’s famous voyage, which, I was amazed to learn, was originally supposed to take Jenyns around the world before he suggested that Darwin take his place.

A walk up Bathwick Hill took me to 1 Darlington Place, Jenyns’ primary residence in 1860. Having delved so deeply into his life up until this point, it was quite astonishing to think that I was now walking in his very footsteps. A quiet stroll back down the hill lead me pass the Holburne Museum, on to Great Pulteney Street and to the house in which William Smith, ‘the father of geology’, dictated The Order of the Strata – findings which influenced the contents of Darwin’s book.

From Great Pulteney Street to the iconic Pulteney Bridge and around to the curved metal signage reading ‘The Island Club’ outside The Abbey Hotel. I was thrilled to finally discover that the mysterious stone steps taking you below street level used to take you to BRLSI’s first ever home.

As the app pointed me in the direction of Queen Square, and BRLSI’s current location, I passed the abbey, where the app detailed the conversations which took place between Jenyns, at this point an ordained minister of the Church of England, and Darwin, as the two discuss his scientific theory and its reception in a Christian society.

The trail ends at the steps to BRLSI. A two-hour walk felt as though it had passed in half the time. Having been so engaged in the story, it was fascinating to see Jenyns’ original copy of The Origins of Species, scrawled with Darwin’s own handwriting, alongside a letter that Jenyns had written to Darwin. What’s more it sat next to antiquities almost 4.2 billion years old. It’s difficult to appreciate just how spectacular the museum’s collection truly is.

The design process
From the outset, it is clear that the app has had a great deal of care and attention poured into it. The ingenuity of the design is a testament to the talented creators and the app is without a doubt a pioneering way to learn about the city we love.

Leading the project with Visual Communications postgraduate students was Tim Vyner, professor of illustration, and Rupert Bassett, associate lecturer and graphic designer. As BRLSI looked for ways to promote its collection, the students were working on a module about connecting with local audiences. It was here that the collaboration was born – a brilliant enmeshment of knowledge and vision. However, it wasn’t until lockdown when museums were placed on a more even playing field and BRLSI began to make its collection more digitally available that the project became a proposal for an interactive app.

None of the work on the app or the exhibition would have been possible without the generous support and encouragement of the Art Fund who awarded BRLSI a grant through their Respond and Reimagine programme designed to meet the immediate challenges connected to the Covid-19 crisis and reimagine future ways of working, and the help of the M. St J Way Charitable Trust.

The project saw the introduction of new technology to BRLSI, enabling them to put their programme and collections before the public in ways previously elusive to them. Alongside the app the grants enabled them to put their world class lecture programme before the wider world by placing it online, edit and curate past talks for a new VirtualBRLSI YouTube channel, breathe life into their collections by harnessing the wonders of Google Arts, and make the entire process of downloading an app, buying a ticket, watching a video, taking up membership or finding out about in-house exhibitions such as the current one, Jurassic Ark, a whole lot easier for allowing the public to access these offerings thorough a brand new website whose sole design purpose is to make the BRLSI more friendly, futuristic and accessible.

The design process was solely in the hands of the students – Isabel Hurley, Maidei Kambarami, Edna Monteiro, Nicky Stevens and Rosie Yates, who were free to experiment with a wide range of mediums to create the desired effect. Each step of the trail is beautifully illustrated with a collage of artwork whether it be photographic, typographic, printed, drawn or digitally drawn.

“So many people don’t know that these objects are here – BRLSI are saying ‘we’re here, we’ve got these fantastic collections, come find out more about us,’” says Tim. “A lot of artwork has been generated and that’s its strength. BRLSI’s collection itself is really varied and eclectic and different, as is the artwork, so it tries to reflect the nature of the institution and the objects that we’re talking about.”

“There was a lot of imagining and bringing new Bath into what old Bath might have looked like,” says Rosie. “We wanted to make sure the stories were portrayed in the right way too – we wanted to be respectful,” adds Isabel.

What’s next?
The app is now live on both App Stores for Apple and Android. For me, however, what the future holds for this app is without a doubt just as exciting as the original concept. While in conversation with BRLSI’s curator and collection manager Matt Williams, the team spoke freely about what could be next for the app, how to incorporate more of the great museum’s collection and narratives, how to engage younger audiences, and how to add difficulty levels. It was fulfilling to witness such a creative collaboration between historians, designers and curators. The museum’s vast collection simply opens the door to endless possibilities for the future of this app. So – walk, learn, enjoy – and watch this space.