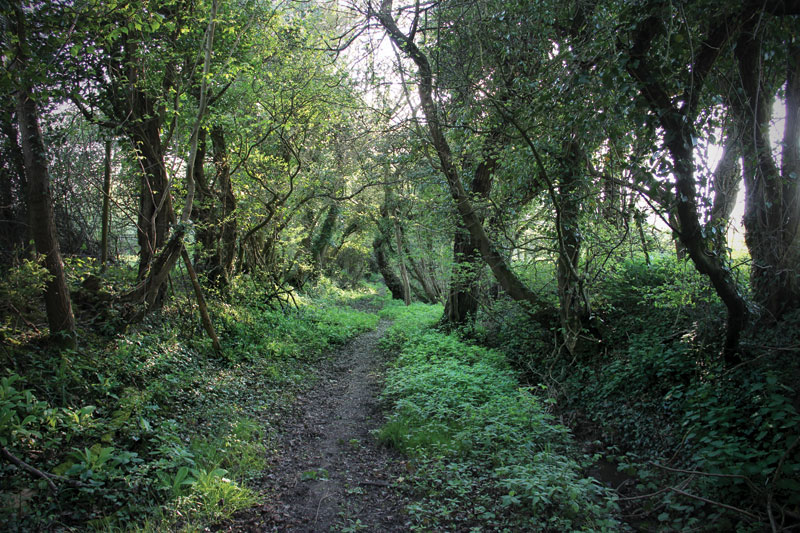 The green woods laugh: A walk in the Cotswolds

Andrew Swift heads to the edge of the Cotswolds, taking in views of a giant caterpillar, a visit to Pennsylvania and a walk along an ancient green lane

For our June walk we explore old tracks, lanes and holloways at the Cotswolds’ southern edge. Although the countryside it passes through is largely unspoilt, however, it does encounter six busy roads, which need to be crossed with patience and care.

The walk starts seven miles north of Bath in Doynton, best reached by heading over Lansdown and through Wick. Once there, you should find on-road parking near the Cross House Inn (BS30 5TF) – now happily reopened after long closure – or the church.

Having parked, head south east along Toghill Lane opposite the church (ST720740). After passing the old brewery on the corner of Watery Lane, Tarmac turns to gravel and high hedges rise up on either side. Beyond Babwell Farm, gravel turns to mud and the climbing starts in earnest. The climb is eventually rewarded by a view to the left – the first of many – as the hedge falls away to reveal fields sweeping away to the far horizon, with a thin line of blue hills in the distance.

A few yards further on, you reach the A420 (ST 726727), the old coach road from Bristol to London, and the building down to your right is the Royal Oak Inn, closed in 1894. Cross, go through a gate and, as you head up a track, the views open up westward.

At the top, cross a stile by a gate, carry on through a seven-bar gate and carry on alongside a fence. After crossing a stile at the end, cross another busy road and turn right along a rough and narrow verge for 100m. Turn left along the drive to Hamswell House for a few metres before crossing a stile on the right (ST727720) and following a waymark diagonally across a field. Cross a double stile and carry on in the same direction.

As you continue to climb, you cannot see the other side of the field. Little by little, though, as you approach the crest of the hill, the views southward towards Bathampton Down and the Westbury White Horse unfold, while, on your right, the caterpillar of trees on Freezing Hill comes into view.

Cross a stile and, as you follow a hedgerow downhill, a view of the Swainswick Valley opens up below. After 300m, go through a kissing gate (KG) in the hedge and head down to the left of a cottage at the bottom. Go through a gate, cross a gravel drive, go through another gate and turn left along a lane. After 150m, just before Brook Cottage, turn left through a KG to follow a Cotswold Way (CW) waymark (ST734710).

Carry on in the same direction through three fields, and, after crossing a brook, follow a CW waymark uphill past Hill Farm. Continue along the lane for 1,200m, before crossing a busy road and heading up the lane opposite. After 100m, carry on along another lane through the village of Cold Ashton (ST746725), passing a succession of ancient buildings, the highlight of which – Cold Ashton Manor – can be glimpsed behind a high wall on the left. Its ornate early 17th century gateway commands a view over the wooded valleys southwards, with Beckford’s Tower just visible. Beyond the manor is the old rectory, to which Sir Bevil Grenville was brought after being fatally wounded at the Battle of Lansdown in 1643, although the building was substantially altered in the 19th century. Turn left up a path to the church, whose squat 14th century tower is all that survives of the original building, which was rebuilt in the 16th century. Go through a KG beyond the church and carry on to another busy road. Cross and turn left past the 17th century White Hart Inn, closed around 2010 and now home to an interior design company.

After 100m, turn right to follow a CW sign diagonally across a field. Cross a step stile (ST746729) and head along a track to the buildings on the far side of a field. This is Pennsylvania, and, when you reach the road, you can see another lost inn, the Swan – now a B&B – beyond the petrol station.

Cross the road with care and head up Bull Patch Lane opposite. After 75m, follow a footpath sign through a handgate on the left (ST743733). Keep close to the fence on the left, but, when it veers away, carry straight on, heading to the left of a row of conifers. When you reach them, bear right, keeping the fence on your left, and after 350m you will come to yet another busy road (ST738734).

Cross over, go through a handgate and head straight across a large field. After about 250m, the land starts falling away and the views open up to the north and west. You will also see a large hedge – or rather a long line of woodland – in the direction you are walking. As you head to the right of it and carry on downhill, the reason for it becomes apparent in the form of a steep drop on the other side.

At the bottom of the field, turn right along the fence for a few metres before crossing a stile and following a waymark downhill. Carry on across a stile and head for the bottom right-hand corner of the field, where there are two KGs (ST731738). Go through the one on the right and turn left along a green lane, which, as you can see, is impassable in the other direction.

If you were to hack a way through the undergrowth and force your way uphill, you would find, after about 300m, further progress impossible, for the lane ends in the middle of nowhere and has done for a very long time. That it once continued on seems indisputable, and, given the width of the lane, it was probably well used. But at some stage, probably when the land was enclosed, someone decided to close it off, and those who had walked or ridden it had to find an alternative route. Since then, what is left has become a lane without a purpose, a lane to nowhere – and a suitably evocative way to head back to Doynton.

As you carry on down, you will see that the old lane is still well walked, and two gates have been installed where it crosses a farm track. Just beyond them a spring has colonised the old track, and further down, where there are KGs on either side, rough stepping stones indicate where to cross.

Head towards the KG on your right and work your way along a spring before crossing more stones across a brook to continue along the green lane. When you come to a gate, follow the lane as it bears left and turn right along a lane at the end. After 300m, when you come to a T-junction, turn right and retrace your steps into Doynton.

Level of challenge: some climbing, several stiles and muddy sections. There are also six busy road crossings and fields where livestock may be encountered.