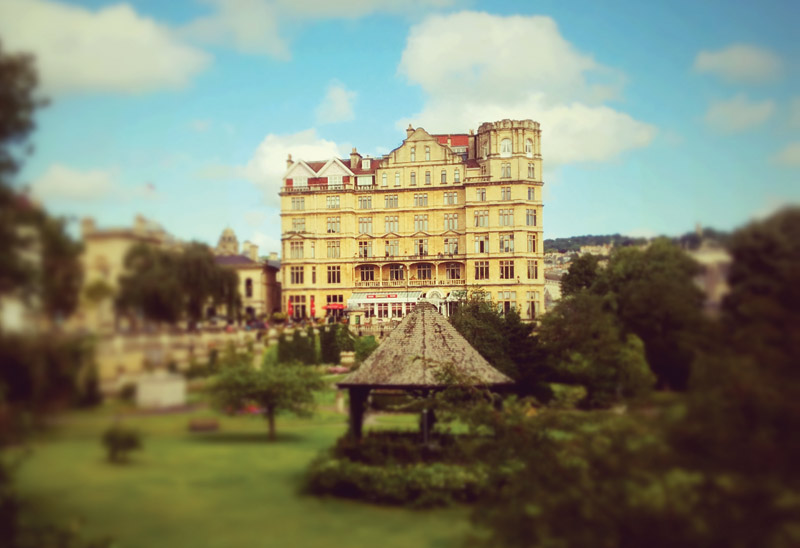 Glory days of the Empire

At 102 feet tall and with an extraordinary roofline depicting a cottage, house and a castle, you really can’t miss the old Empire Hotel next to Pulteney Weir. It has been described over time as everything from “elegant” and “eccentric” to a “sunken architectural soufflé”.

Today The Empire, as it is now known, houses luxury apartments, with restaurants on the ground floor; but many remember the building’s earlier incarnation as an Admiralty building during, and after, the Second World War. Yet, the period when it was actually one of the grandest hotels in Bath is largely neglected.

The Empire’s conception owes itself to the ambitions of the late 19th century city Surveyor of Works, the architect, Major Charles E Davis. A controversial character, Davis clashed with his fellow architects over city contracts.

Davis’s overriding ambition was to build a grand hotel and a new road linking the Orange Grove with Pulteney Bridge. Thwarted on a number of occasions, he eventually achieved both with The Empire Hotel and adjoining Grand Parade.

Davis’s vision was partly financed by the hotelier, Albert Holland (who before completion passed the hotel into the hands of Spiers and Pond, a hotel and catering group). The Empire became part of a portfolio that included The Metropole in Blackpool and The Empire in Buxton.

The hotel was also financed by the citizens of Bath. This form of Victorian crowdfunding did not go down well in the city, and many opposed the vast expense of such an extravagant building, built solely, it was believed, for “American millionaires”. Still, the money was raised, and building work began in 1899.

Historians are wont to describe the destruction of parts of the 18th century city in the 1960s as the Sack of Bath. But in fact it started earlier. In erecting The Empire, Davis demolished a chunk of Georgian history. Slaughterhouses, tenements, the Withy & Co Soda Water Manufactory, and The Athenaeum Club were all swept away. Only the medieval East Gate survives. In an archaeological excavation at the hotel, in the mid-1990s, parts of the old city were rediscovered beneath The Empire’s basement.

The hotel was to cost £50,000 (around £5.5m at today’s prices). The grand opening took place on 28 November 1901. Sadly Davis had little time to enjoy his achievement, for he died the following year.

On opening, The Empire was lauded as a “palace of luxury” and “the most modern and up to date hotel in the city.” The Abbey bells rang out in honour and a special train from London was organised for invited guests, who were taken by coach from the station along a flag and bunting strewn route to the hotel. The Grand Parade and Colonnade had not yet been completed, but the scaffolding was disguised with drapes of scarlet cloth.

After a tour of the hotel, the VIPs were treated to a “recherché dejuner” while being serenaded by the hotel’s band. A special composition entitled The Empire March had even been written for the occasion. Later in the afternoon the doors were opened to the gathering general public.

Entering under the wrought and cast iron canopy you were swept up into the entrance lobby. Ahead of you was the grand hotel staircase, made out of three types of wood – cedar, mahogany and oak. To the left were the dining rooms consisting of a private salon, main room and serving area. As you looked to the right there was another lounge, with “the most agreeable views”, followed by drawing, smoking and billiards rooms.

Everywhere you looked there would have been sumptuous decorations. Velvet and marbled walls, French silk, rich tapestries, ornamental woodwork and Persian and Oriental carpets. The corridors and landings were described as large and wide to “suit the most infirm.” The hotel was said to accommodate around 200 guests in 100 rooms, including 10 private suites. It is also rather comforting to note that the lavatories were “reputed to be among the finest in Britain.”

The cost of staying at The Empire varied, but in the 1920s a bedroom with sitting room cost two guineas per night, or around £200 today. A surviving receipt from July 1934 listed what guests could expect to pay for during their stay and included everything from food and theatre tickets to cigarettes and cigars.

By the turn of the 20th century, Bath had started to see a rise in tourists visiting, but the main trade for hotels was in the long term resident who was there to take medicinal spa treatments. Over time though, more short term guests arrived into Bath, but it took a while for the hotels to adapt. Lois Stride, a chambermaid at Pratt’s Hotel in the 1930s recalled how difficult The Empire Hotel found it. The “one-nighters” arrived by coach to The Empire, but were “sent around the back . . . as (it was) so demeaning.”

The Empire was a hotel where royalty and politicians, writers and film stars would rub shoulders. Queen Mary, Lloyd George, Rudyard Kipling and Radclyffe Hall were among the hotel’s guests. Many of the local Bath societies, like the Cricket and Motoring Clubs, also used The Empire’s facilities.

In the early years, the hotel liked to keep ahead of the trends. In 1909, it became the first hotel in Bath to own its own motorbus. However by the 1930s change was not always welcomed. The last manager of The Empire, Johnny Johnson, was almost sacked for his attempts at modernisaton, especially when he “removed the ladies and gents signs which segregated the hotel’s bathrooms, and introduced a dance floor into the tea room.”

Staff who worked at The Empire included a driver for the hotel’s motorbus, the hotel’s own musicians, plus on special occasions vocalists were employed for entertainment. Valets were also available to guests who had not brought their servants. Many members of staff at The Empire had trained at prestigious hotels. The head waiter in 1933 had trained at The Savoy in London while Mr Paul G. Harris the new general manager in 1924 had worked at The Ritz in Paris.

At the dawn of the First World War in 1914, German, Hungarian and Austrian employees were dispensed with by Bath hotels; including ten members of staff from The Empire.

By 1939, two days before the declaration of war on 3 September, Bath’s hotels were given just 24 hours to empty. The Admiralty was moving in. At The Empire Hotel there were over 100 guests staying, including ten long-term residents. Eileen Rogers witnessed the frantic scramble: “They were mostly well to do people . . . all their suitcases and trunks were outside on the pavement and taxis were rolling up for them.” Within the space of a day the era of The Empire as a hotel had ended.

Despite Admiralty presence at The Empire, it was noted that even in the 1980s, tourists, suitcases in hand, would still arrive on the doorstep seeking accommodation. It appears the hotel’s motto: “The Sun never sets above The Empire” rings true.

There are many more stories to be told of this fascinating building. If you or your family have any memories, memorabilia or photographs of The Empire, both as a hotel and under Admiralty ownership, that you wish to share with the author, please contact catherinepitt@hotmail.com.

With thanks to Dr John Wroughton of The Empire Residents’ Committee, Dan Brown of Bath in Time and Stuart Burroughs of the Bath Records Office.