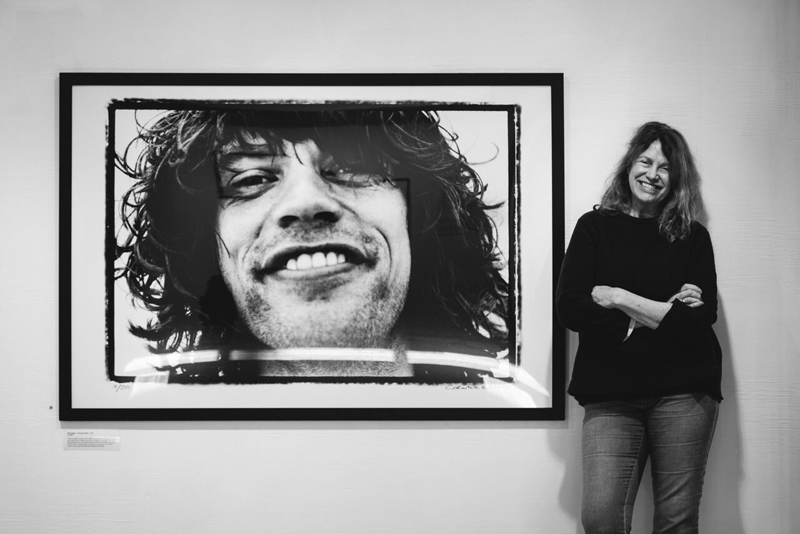 Friends, not f-stops: an interview with Carinthia West

Model, actress and IT girl of the 1970s, Carinthia West always had her camera with her. She also had some very cool and rather famous friends, including Mick Jagger, Ronnie Wood, Eric Idle, Helen Mirren and Anjelica Huston. A selection of her portraits are currently being shown at the Shooting Stars exhibition at the American Museum & Gardens, which runs until 31 October. By Emma Clegg

We weren’t doing something for Instagram. If we looked like s**t in the photograph, either you didn’t print it or if it was a Polaroid you tore it up. Nowadays it goes round the world in three seconds,” says Carinthia West.

Yes, times have changed. As have the faces in the photographs. Carinthia is referring to the 1970s – the decade provided a real-life setting for many of us, but it has now fallen into a retro dream with a golden glow of bell-bottoms, hot pants and platforms, and has become a vintage source of fascination. Well you can chase this dream right now with a visit to the American Museum & Gardens and their new exhibition Shooting Stars: Carinthia West, Britain and America in the 1970s, a collection of 63 intimate natural portraits and lifestyle shots taken in America and the UK, running until 31 October.

Carinthia West was rarely seen without her Canon camera in the 1970s and ’80s, and because of the company she kept – with close friends including Mick Jagger, Ronnie Wood, George Harrison,
Eric Idle, Shelley Duvall, Helen Mirren and Anjelica Huston – her photographs are a constant source of fascination. But she wasn’t an ambitious tagger-on, a groupie or a career photographer seeking out the company of these stars – she just liked taking pictures of her friends.

“We were very lucky because there wasn’t much self-consciousness around. With fashion, for example, at school we just pulled everything together out of our mothers’ and grandmothers’ cupboards and pulled our skirts up when we left the school gates.

“And it was all style that was unpretentious fun and it didn’t have any strictures on it. For example I used to wear red fox as a hat with the eyes of the fox and a tail. My grandmother was horrified and told me that’s what tarts wore in the ’20s and ’30s. And now everybody would be horrified for a different reason, and quite rightly. My grandmother always used to say to me, ‘stop making such an exhibition of yourself’.”

Everyone is now a photographer because it’s so shoot and aim, voilà. But in the ’70s a Canon needed a level of technical expertise, right? Carinthia’s style was not driven by technical advancements, however.

“I started with a Box Brownie and then I had a Konika and then a Canon and I stuck with Canon because they are great cameras. I had a wonderful Canon that sadly got stolen with a lucky red strap, an EF (electro-focus) camera.

“I had a boyfriend in the early 1970s, my first great love. He was a singer songwriter, an amazing guy called Gary Farr [a British folk/blues singer and founder and lead vocalist of the T-Bones].

“He started picking up a camera and then he got into F-stops and buying technical magazines and boring me rigid with what aperture he was using and I stopped taking photographs and I felt daunted by my own pictures. It wasn’t until we split up a couple of years later that I picked up a camera again. Science can really ruin things if there’s too much data, too much technical stuff.

“There is a mystery about taking the right photograph. A mystique – you know when you’re looking at something that really captures the atmosphere of the moment, whatever it was. I’m reading David Bailey’s book at the moment and he was so dominant in his shoots (I modelled for him for a Woolworths ad), coaxing models with phrases like ‘Come on baby, pussycat, give me that look’, and only a man could be so ‘couldn’t give a damn’. He was just as rude about beautiful women and older women. We as women take photographs in a more subtle way.”

David Bowie
“I shared a flat with Coco [Schwab, David Bowie’s assistant] at one point in LA. And David would ring a lot. He saw my modelling pictures in about 1979, and he told me they were all rubbish and I could have much better ones and that ‘Coco and I will style you’. And he brought in this new young photographer, an ingénue, a Peruvian called Mario Testino, who I’d not heard of. And we did this amazing photoshoot, the photographs were just fantastic and we had so much fun. Then David went off on tour and I got a call from Mario saying ‘I don’t know how to say this, but the pictures have been lost at the lab.” Years later I saw him at a party and he said ‘I still can hardly bear to think of the photographs we lost.’

“David asked me on holiday on a boat – he owned a wonderful yacht – so I went with Coco and David and his girlfriend at the time, and we went all around the Amalfi coast, so I knew him pretty well. He was a gentleman and he was very thoughtful.”

Mick Jagger and Ronnie Wood are frequent subjects of Carinthia’s photographs in the early ’70s when Ronnie had rented a house on Malibu Colony with his first wife, Chrissie. Carinthia had a room at the house and she went in the ambulance with pregnant Chrissie when their son Jesse was born and that night there was a huge party at Ronnie’s house, Carinthia tells me.

“In that period of time I’d been doing a lot of modelling and commercials and I wanted to get out of England, which was on a three-day week and was really depressing. I had friends in California and I went out there.

“All the LA London people who were there stuck together – Rod Stewart had this football game every Saturday and I have photographs of that. And then Ronnie and Chrissie said ‘come and stay’ and Mick came over to stay and then the band would appear, or Bob Dylan, as Ronnie Wood was always having all-night jam sessions.” Other friends over this period, Carinthia told me, were people such as Rod Stewart, Ian La Frenais (the writer of Porridge) and IT Girl Sabrina Guinness.

“The main thing about those times with Mick and Ronnie was how funny they were. It was just hilarious, all the time it was just jokes. Eric Idle was an important part of that time – he did a spin-off series of Monty Python and I became the girl in that. George Harrison worked with us on that too. Before you settle down and have kids, life is fun, and that’s what it was like.”

Helen Mirren
Helen Mirren and I shared a flat in LA with Rory Flynn, Errol Flynn’s daughter, who was a model. Helen was making a big movie, White Knights, with Barishnikov. She was making lots of money and Rory and I were flat broke.

“While she was in that house she won the best actress award for Cal at the Cannes Film Festival. They were ringing to tell her as she was driving up in her rented red Mustang and I was able to shout out to her ‘You’ve won, you’ve won, they are on the telephone!’. I photographed her reaction, and it’s a lovely photograph. It’s black and white but we couldn’t use it in the exhibition because technically it’s 1980. ‘She is such a lovely person and a good friend and she just hasn’t changed a bit – she is very down to earth and fun and incredibly hard-working.”

Robin Williams
“Robin was the most generous man. I went to Saturday Night Live a lot of times and he’d then take everyone out to dinner and pay for everybody. He was making a fortune by then with the Mork and Mindy series. If you were on the beach with Robin and you said to him, ‘Oh shut up I just want to read my book’, he’d go off and find a three year old to play with. He just needed an audience – he was so funny. I’ve never had the privilege of meeting anyone funnier than Robin and they weren’t scripted jokes, he was just natural and he’d use his body language – he’d become a tree or a dog and you were in stitches the whole time.”

Carinthia was clearly not star struck. So how did she keep up with all these big characters? “I don’t like saying this, but I was probably quite good fun to be around. I wasn’t a groupie and didn’t want to make capital out of them. I was brought up in diplomatic circles so I wasn’t going to talk about any of them. We all trusted each other. If I took a picture of somebody well-known now on an iPhone they might say, ‘Sorry, no’, but we were not like that then. I was very close to Ronnie and Mick at that time, and still am today. Mick always sends me the most wonderful bouquet for my birthday.

“I took so many photographs of everyday life, of the market, street food, and other friends, but for the exhibitions I’ve been doing for the last 10 years people do want recognisable faces. And I’m always a bit nervous about people thinking, ‘Did she only hang out with stars?’. But I was very unlike that, and still am. Maybe that was why the stars were happy to have their pictures taken by me.”

Shooting Stars: Carinthia West, Britain and America in the 1970s is at The American Museum & Gardens until 31 October; americanmuseum.org