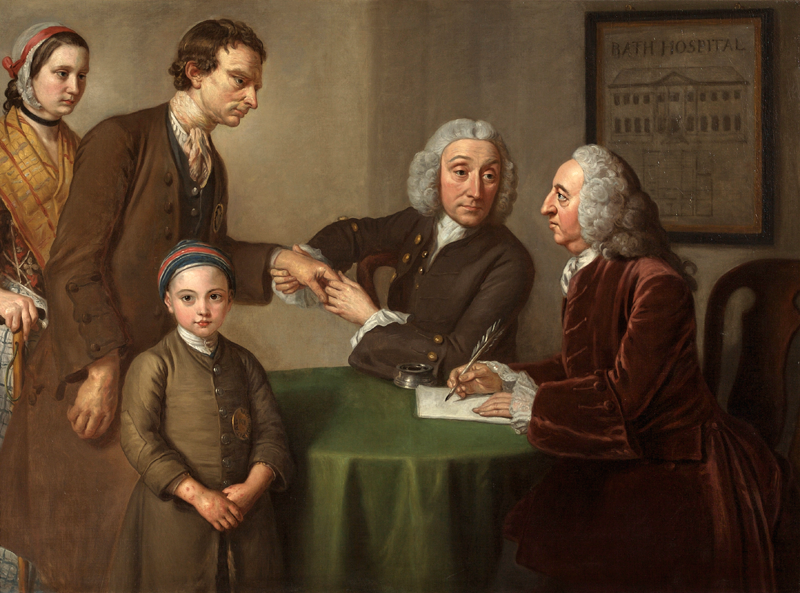 Two hundred years before the creation of the National Health Service (NHS), a group of philanthropic men and women founded a hospital in Bath for the benefit of the nation. Known over the centuries as The General Hospital, The Royal Mineral Water Hospital, and The Royal National Hospital for Rheumatic Diseases (RNHRD), The Min, as it’s more fondly known, has been at the forefront of medical research and care since 1742.

The curative properties of Bath’s thermal waters are well documented. Even Bath’s foundation is attributed to the miraculous use of the waters on King Bladud’s disfiguring skin disease. By the 18th century the city’s reputation for its medicinal springs had led to its expansion and popularity. However, with success came a darker side.

Bath’s fame brought with it an influx of poor and infirm, many of whom begged on the streets seeking aid and alms to take the cure. Bellott’s Hospital (founded 1609) had been created to help the situation; however it had just 12 beds, admitted only men, and restricted stays to a maximum of four weeks.

Seeking to resolve the issue of the so-called Beggars of Bath and regulate those seeking medical treatment in the city, Lady Elizabeth Hastings, Sir Joseph Jekyll, Richard Marchant and bankers Benjamin and Henry Hoare, proposed the idea of creating an inclusive hospital that would provide “free treatment for the sick and poor of Britain and Ireland.”

This hospital was to be entirely self-funded, and even before the hospital was built the raising of monies for it began in earnest. Bath’s Master of Ceremonies, Richard Beau Nash arranged balls and collected subscriptions; wills, donations and even bequests of a diamond, and 1,000 oranges, contributed to the coffers. The list of donors reads like a Who’s Who of 18th century Bath society. Those who donated £40 or more were invited to become a hospital governor, including the artist William Hoare and the actor David Garrick.

On what had previously been Bath’s first playhouse, the foundation stone for The Min was laid on 6 July 1738 by the Right Honourable William Pulteney, Earl of Bath. The hospital lay just within the city walls and faced onto meadows. It took four years to complete and had many generous benefactors. The architect, John Wood the Elder gave his time for free, while entrepreneur Ralph Allen provided stone from his own mines nearby for zero cost.

When the hospital opened in 1742 it had 70 beds on four wards, as well as an onsite apothecary, brewery, laboratory, and even a burial ground situated just the other side of the city wall. The staff included Mrs Whitlock (matron), Jeremiah Pierce (surgeon), John Morris (apothecary), plus doctors Oliver, Harington and Rayner. Until 1829 staff had to reside on site and only senior staff had private rooms – everyone else had to sleep on the wards.

Although the hospital had been created for the nation, there were certain stipulations potential patients had to meet. Firstly you couldn’t be a resident of Bath (ie live within the city walls) since residents already enjoyed the privilege of free access to the waters. Secondly all patients had to be referred to the hospital by a physician’s letter. Thirdly, if you were infectious or had a sexually transmitted disease then you were automatically refused admittance.

Finally, if you were accepted for treatment by the Hospital Board, you had to provide caution money. This money provided you with clothes if needed, covered burial costs if you died on site; or would act as your fare home (this practice of caution money ceased in 1937). For the poor this money was given either by the parish or from some other benefactor.

Men and women were housed on separate wards, and any children admitted for treatment stayed on the women’s ward. Days in the hospital were pretty regimented. Early starts and early bedtimes were enforced, and the rules that were read out every week to the patients included no drinking, no fraternising, no swearing and no games.

Up until 1830 when two hydrotherapy pools were built on site, patients were escorted six days a week to the Hot and King’s Baths by the chairmen and guides. Each person wore a brass badge to identify them as a patient of the hospital, which was also a handy identifier for local innkeepers and law enforcement officers.

It was not uncommon for patients to break the rules and head to the nearest hostelry to imbibe a different kind of water. However, it wasn’t just the patients breaking the rules – hospital records of 1743 note that chairmen and guides were found to be drinking liquors with patients while they bathed.

“Its wondrous cures have gained a world-wide fame Bath Mineral Water Hospital  is its name . . .”
Anon, 1865

Other misdemeanours recorded included the dismissal of a Dr Archibald Cleland in 1743 for professional misconduct and the elopement of two couples during their stay at The Min, despite the segregated wards. Vandalism, fighting, and graffiti were other recorded consequences of the tedium of routine at the hospital, with one patient even fined for the damage he caused while racing his wheelchair around the building.

Initially intake to the hospital was slow. Advertisements had been placed in London papers but this had a limited readership geographically. Leaflets had also been sent to every parish church in England to be handed out, however some leaflet distributors took it upon themselves to charge for each flyer and as a consequence news about the hospital spread gradually.

Yet within 50 years of its opening The Min had outgrown itself. A third floor was added to the original building in 1793 to help ease the waiting lists. The idea of rebuilding the hospital elsewhere in the city also continued to gather support. With the growth of Bath, the hospital no longer overlooked quiet fields, and instead found itself in the middle of a bustling commercial city.

Although various sites around the city were proposed for the building of a bigger hospital, including the Sydney Garden Hotel (now The Holburne Museum), it was the sale of the adjacent rectory and other buildings in the late 1850s that enabled George Manners and John Gill to design and build an adjoining west wing and chapel.

As the hospital grew in size so did its reputation for research. By 1938 it was considered to have the most progressive rheumatology unit in the world; though in the 18th century patients were merely guinea pigs for the doctors.

Many of the illnesses treated by The Min in the 18th and 19th centuries, such as gout, palsy, paralysis and rheumatism, can be attributed to patients’ exposure to lead and other heavy metals – a consequence of the virtually non-existent health and safety standards in workplaces, and the regular adulteration of foodstuffs and drinks in this period.

Not only were the waters imbibed or bathed in, but treatments at The Min included enemas, needle douches, cupping, scarifying of gums, and hydrotherapy involving sulphur or electricity. Between 1742 and 1888 61,216 patients were admitted, with 16,151 recovering and 34,506 relieved of their symptoms.

The uniqueness of the hospital was almost its downfall. After the creation of the NHS in 1948, the government sought to amalgamate specialist hospitals such as The Min, but one man – Doctor George Kersley – began a crusade to keep it open, despite the high costs to repairing the bomb damaged west wing which had been hit during the Bath Blitz in 1942. Kersley won his battle and rebuilding began in 1962.

Today the hospital still provides 25 beds on site. It became part of the NHS in 1991 and, as of 2015, was acquired by the Royal United Hospitals Bath with a relocation of services programme currently in full effect.

Virtually all internal evidence of the Georgian hospital has disappeared, but the legacy of its founding members – Hoare, Hastings, Oliver, Nash etc – live on at present in the nation’s only dedicated hospital to rheumatic diseases.

From Monday 19 September the Bath Medical Museum, chronicling the history of The Min, will be launched at The Royal National Hospital for Rheumatic Diseases, Upper Borough Walls, Bath, BA1 1RL.