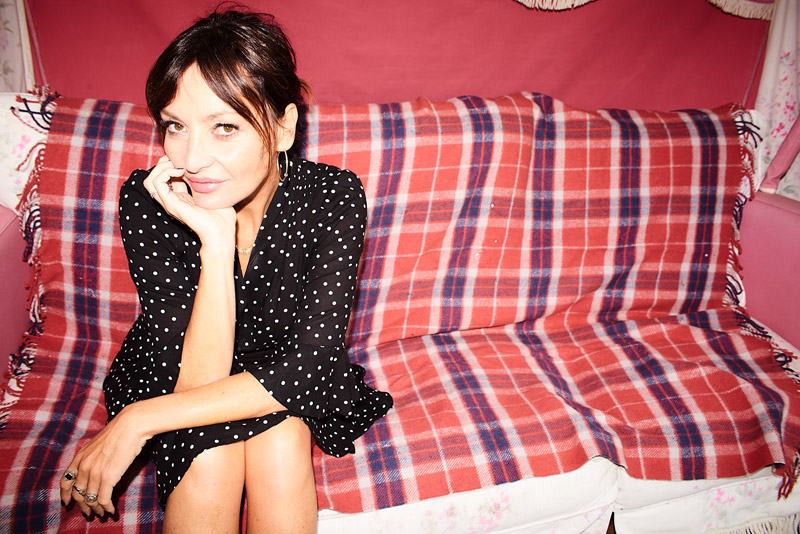 “To me, an object that was once the height of elegance but is now a bit battered has far more allure than something brand new,” says Pearl Lowe, the Frome-based former singer, now known for her love of vintage interiors and fashion. Her book Faded Glamour is published this month and here we have an excerpt, profiling designer Solange Azagury-Partridge’s eclectic country cottage in Bruton. Photography by Amy Neunsinger

If you are ever in need of an injection of colour on a cold, wet winter’s night, then I suggest you inveigle an invitation to the three-bedroom country cottage where the designer Solange Azagury-Partridge sets up home on weekends, high days and holidays. Set in one of the most picturesque villages in the west country, this is one of the most delightful cottages I have ever visited. Aside from the charm of the building itself with its tiny turret and beautiful walled garden, it’s what lies inside that will make your spirits soar as she opens her baby pink front door and ushers you in from the cold.

Given that she is one of the most respected jewellery designers of her generation – some of her most exquisite pieces are on display at the Victoria and Albert Museum in London and the Musée des Arts Décoratifs in Paris, and she is also renowned for her interiors collections – you would expect Solange to know a thing or two about colour. But in this small space she takes her palette to another level, creating a home that is warm and inviting even on the most drab of days.

Solange and her husband Murray fell in love with the 100-year-old property more than a decade ago while visiting friends in Somerset. At the time, they wanted to create a nest that they and their children could seek refuge in, away from the big smoke of London. The brief was simple – she wanted it to feel like a home, rather than a weekend cottage, and it had to be comfortable, warm and welcoming.

By knocking down a couple of walls in the downstairs of the house and expanding the kitchen space into an outbuilding so they could comfortably seat ten people for gatherings, they have achieved this. At the core of the house is what Solange and her family call the Fire Room. “It got that name because we have fireplaces at both ends of the room – which we gained by knocking a wall down and opening up the room,” she says. “On a cold day, we light them both and hunker in here to read, talk and watch movies, and it’s where we entertain when we aren’t in the kitchen.” Key to her design plan was comfort, so everywhere you look are overstuffed sofas and day-beds waiting to be snuggled up on. “When I’m here it’s all about relaxing – I spend quite a lot of the time here horizontal, I’m not ashamed to say!” she laughs. These sofas and chairs are covered in a giddy array of colourful fabrics and throws that Solange has been collecting for years. “I have piles and piles of fabric,” she says. “I buy them on a whim – sometimes from abroad, often online, or I find them in markets. I never have a plan for their use, it will just come to me while I’m doing up a room and I’ll seek one out that I think fits.”

Solange doesn’t like to conform. In a corner of the living room, for example, a sofa covered in a flowery chintz from Sanderson sits happily at right angles to one dressed in an ikat print. Mismatched rugs from Morocco form a colourful patchwork across the central living spaces. A heavy, embroidered, mirrored curtain serves as a draft excluder over the front door; a wild, boldly coloured Swedish fabric has been used to cover an Eames-style chair and footstool in their snug. “It was covered in black leather originally, which didn’t work for me. Now it makes me smile and want to just sink into it in the evening.”

Suffice it to say, Solange loves her fabric – to such an extent that almost every single room is covered in it. “I love using fabric on walls, because it feels not only quite luxurious, but it’s warm and also creates a depth of sound in a room – a soft echo that you wouldn’t get from papers or paint.” And what I love here is that she hasn’t been afraid to mix these fabrics up – so they are often not only contrasting with each other, but going head to head in a riot of colour and pattern. “That’s actually for practical and economic reasons,” she admits. “As I often don’t have enough of one fabric so have to use another, but I like the effect in a house like this.”

All the woodwork in the house has been painted the most enchanting shade of baby pink. And on the spiral turret staircase leading up to the first floor, she has been even braver with her use of colour by covering each step in a different shade of carpet, creating a magical rainbow to take you up to bed – a real stairway to heaven. A yellow velvet studded sofa that she bought as a pair from eBay for £100 (she loves a bargain, as do I, which is why she is a woman after my own heart) clashes against the shocking pink toile de Jouy she has lined the hallway and downstairs bathroom with. Fabrics from William Morris and Liberty have been used to create warmth and cosiness in rooms where all anyone wants to do is kick their shoes off and relax.

This is certainly a house that I would like to spend some serious horizontal time in, as Solange’s bold use of colour is full of wit and wonder and brings a smile to your face. “But that’s the thing about colour – we all need a bit of it in our lives,” she says. “And for me, quite frankly, I can never have enough of it.”