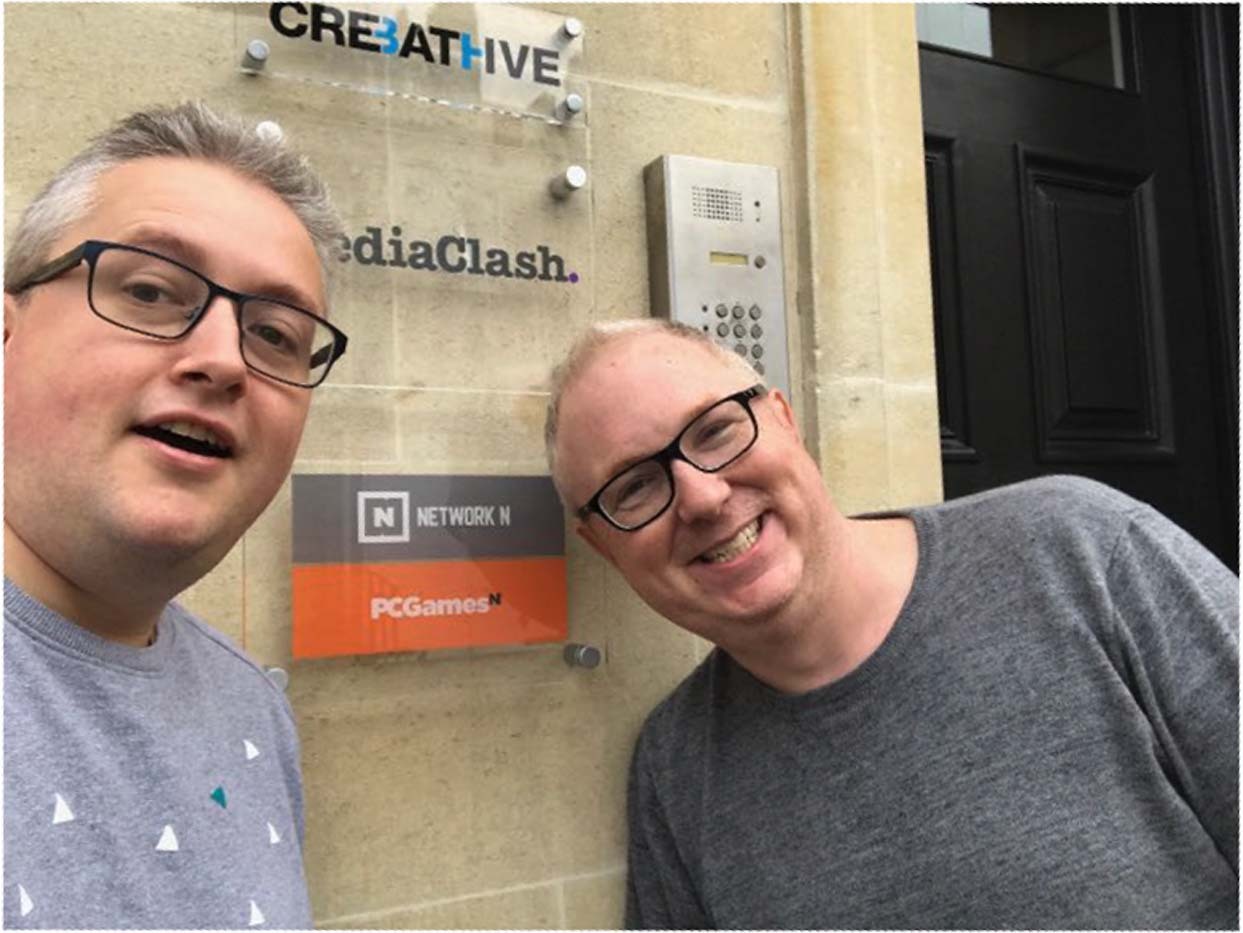 Network N is a global media business focusing on gamers, gear and e-sports. Emma Clegg talks to
co-founder Tim Edwards about how quickly the company has grown and what is driving their success.

Network N have had a threefold increase in staff since that March date in 2020 when the world shifted into a different gear. That’s because they are in the business of entertainment gaming and that’s what we all needed back then. Network N are a games media business funded by digital web advertising, set up by Tim Edwards and James Binns in 2012. Both had previously worked at Future Publishing – James previously ran Future’s entire gaming portfolio, including launching sites like GamesRadar and Tim was previously the editor in chief of PCGamer and launched the global brand PCGamer.com.

Network N reaches over 60m+ unique users per month across its network of websites, has a turnover of £5.4 million and the company has recently joined Bath Unlimited’s group of local world-class businesses. Network N is divided into three parts, covering all areas of the gaming market. First there is a publishing business which owns and operates websites, running the editorial and video production. The second part is an agency where either games or services are marketed to gamers – one of their significant customers being Amazon, marketing its games division. The final part is to do with helping people monetise their websites through advertising.

The growth of the gaming industry
The industry has changed apace over the last few decades, Tim explains. “The first 20–30 years of gaming (starting in the 1970s) were controlled by the gatekeepers, like Sony, Nintendo and Microsoft where you’d have to pay to create a game for their consoles. But today anyone can rock up and make a game for a PC and start selling it themselves. There are millions of ways you can make money from it.”
The growth of the business since lockdown has been focused on the publishing and website aspects because these have been the areas of natural growth. “Web traffic went through the roof in lockdown, so we leant into the ad sales opportunity there and the business has grown significantly as a result. Publishing has shot off too because of the web traffic. Agency was harder because the first thing to go in any form of recession is your marketing budget,” explains Tim.

“It’s been very opportunistic and the pace where new work has come from hasn’t necessarily been as expected. Every year the balance changes about where the opportunities lie. This year it’s definitely in the advertising network, next year it will be in our owner operating sites.”

E-sports have been another significant growth area in the last 18 months. “Competitive gaming has grown massively through the pandemic because there was a time when there was no opportunity to play competitive sports. And the e-sports industry is bound up with companies in the hardware business who see it as one of their core marketing channels for reaching gamers. So in the same way Nike might be sponsoring athletes, a mouse manufacturer might be sponsoring e-sports players.”

Mobile gaming is another area that’s been on the ascendant: “Mobile gaming is the biggest market for games and that’s not just for kids – adults play them all the time when they are watching television. We see these weird spikes around 7 or 8pm where people start googling games. So we launched a website about mobile games and it went from 200,000 visitors a month to 8 million in about 4–5 months. And that’s because of smart content, a great editorial team and seeing the market opportunity.”

Career opportunities
Speaking for young graduates who might be looking for work in this booming industry,
I wonder what sort of roles are available at Network N? And is it crucial to have a good knowledge of gaming? Tim maintains not: “We have a bunch of core values and one of them is ‘geeky’. That doesn’t mean you are just into computer games or Lord of the Rings, but that you are into something – it can be pottery or sport or a football team. All we want is to be able to talk to you about something that you are passionate about, and then we know that you are a good match. It’s not just all games, games games. And I think that is a much healthier way to be than having just a load of super nerds.”

Any professional skill you have, there is a place in the games industry for you

The company welcomes different skills: “Any professional skill you have, there is a place in the industry for you. The industry is essentially a combination of all the creative arts and mathematics: there is beautiful art and design; if you want to be an architect, games involve buildings and spaces so you’ll find a place in the games industry; if you are a great writer, you can use your skills.”

Network N’s agency has worked on and been close to some of the biggest games businesses in the world, including producing the in-store magazine for high street retailer GAME and running the launch campaign for the massive title Fortnite. Set in a post-apocalyptic, zombie-infested world and allowing up to 100 players to compete individually or in teams, Fortnite is one of the most played games on the planet. So it seems likely that Network N don’t have difficulties recruiting staff. Tim says, “We have an advantage because we work in video games and if you like video games it’s cool and fun.”

The company has invested thought in its culture and its equipment, making sure that working for Network N is the best experience possible. Part of this is an office refit, being carried out in preparation for staff returning to the workplace, which includes two massive gaming consoles, and gaming PCs set up so staff can play during their breaks.

The lure of gaming
“Where I love this industry is when you find pockets of independent people who have made a cool thing and it’s grown to be this super big company. And if you are a young person in the games industry I’d recommend thinking about doing it in a team because the opportunities are ridiculous.”
As I regret the fact that I’m not a young person in the games industry, I think about the potential career opportunities for the younger generation who love video games, one of whom I’ve harangued endlessly for playing too much Overwatch and Fifa 21.

I grill Tim about how he manages his own children’s time playing games.
“We do a lot of work with a trade body helping parents understand the options available for them to control gaming habits, and there are amazing controls inside consoles, limiting length of play.” Tim says that over the past five years the most popular games have been those designed for kids and young adults like Minecraft, Fortnite, League of Legends and Pokemon Go. “The games are really good and kids will want to play them more than the limits set so that becomes a hard conversation.

“Personally I would prefer my child to play games and enjoy his time playing them, where he’s absolutely actively engaged rather than just zoning out watching the TV. When he is playing with his friends, he’s having a cool time. His brain is engaged and he’s doing pattern recognition and learning stuff and there is an active connection there. If you ban them outright you end up excluding them from crucial friendship circles. But it’s a question of balance, and I also want him to be able to go and see his friends in person.”

The business of online advertising
Certain terms on Network N’s website were alien to me, so I ask for clarification. I can now confirm that a ‘programmatic stack’ is the series of companies and technologies on the internet that gets an advertiser’s message in front of the right consumer at the right time, and ‘header bidding’ offers publishers a way to simultaneously offer ad space out to ad exchanges. It’s all connected with the information that online companies hold about us all. You know those ads that pop up while you are looking at a website, advertising something that you’ve recently been looking at online? That’s the company that won the header bidding auction.

“Facebook knows everything about you because they know every website you’ve ever visited,” says Tim. “So companies can buy an ad through Facebook’s information on the web. Amazon and Google also run their own advertising stack. And Apple are trying to destroy everyone else’s advertising stack. So those big four tech companies own all the information. So how we interact with them and make them compete with each other is the heart of the business.

“That’s why we can go to a website and say work with us and we’ll help monetise it. There has been a very big shift to that form of online advertising in the last two years. It’s all based on the cookies that you’re holding.” Now understanding the complex issues involved in a programmatic stack,
I know that these cookies are not of the chocolate chip variety.