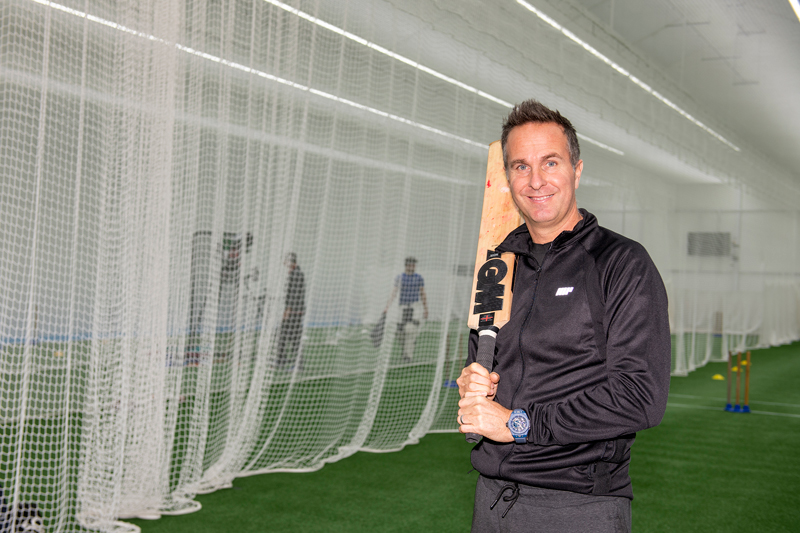 Former England cricket captain Michael Vaughan has given his stamp of approval on Millfield’s new Indoor Cricket Centre after visiting the school to host a series of Q&A and masterclass sessions.

The former international, who is now a regular commentator on BBC’s Test Match Special, BBC 5 Live and Channel 5, said he ‘loved’ the new centre, which puts the school at the forefront of school and university provision for cricket in the UK.

Michael said, “The most important thing about the indoor practice is to get it as close to the outdoors as possible. You need a full run up, different conditions along the wickets lanes, a nice big fielding zone and good height so you can feel that the ball travels when you’re batting; all things that are in the Millfield Indoor Centre. My advice to the students at Millfield is to just use the centre as much as you can to get as much practice as you can!”

The centre features new PitchVision technology on three lanes, a state of the art 4G fielding area, three adaptable bowling and batting surfaces, as well as five nets and an expansive 22 metre run-up. It has been used by professional clubs including Gloucestershire County Cricket Club.

Over 17 teams are in active competition at Millfield, with 13 boys’ and four girls’ teams. The U14 and U15As and Meyers XI fixture lists are largely made up of fixtures against counties, county academies and university teams. In 2016, The Cricketer magazine awarded Millfield its Special Award for Excellence. The thriving girls’ programme has two squads (U15s and Senior) which includes numerous county fixtures and matches against Somerset, Wales, universities and MCC Ladies’ teams.

Millfield Upper Sixth county age group and regional cricket (West of England) player Ben Beaumont, said, “My experience with Michael Vaughan was invaluable and a great learning experience. To be able to have such a detailed interview with such an incredible player was something I didn’t think was possible. His understanding of the game was top quality and I feel the knowledge he has given me will really help me in my career. Michael’s ideas behind backing your ability and having full confidence in yourself was a key point for me and will definitely stand me in good stead not only when I get onto the field but also in school and life in general.” Ben is on the PSPP (Potential Star Player Programme) at Somerset CCC.

Millfield’s Director of Cricket, Mark Garaway, says, “It was fantastic to have Michael here and to hear his reflections on his experiences within the game. He spoke to students about his views and experiences on how he played against the fastest bowlers in the world. His ability to articulate his passion for cricket, the way that he embraced pressure and challenge and yet dealt with the highs and lows of the game in equal measure is so inspiring for our students. These are all brilliant messages for our cricketers to hear. The boys and girls asked fantastic questions to Michael which led to enthralling conversation and the pupil reflections have been great to listen to in the subsequent days.”