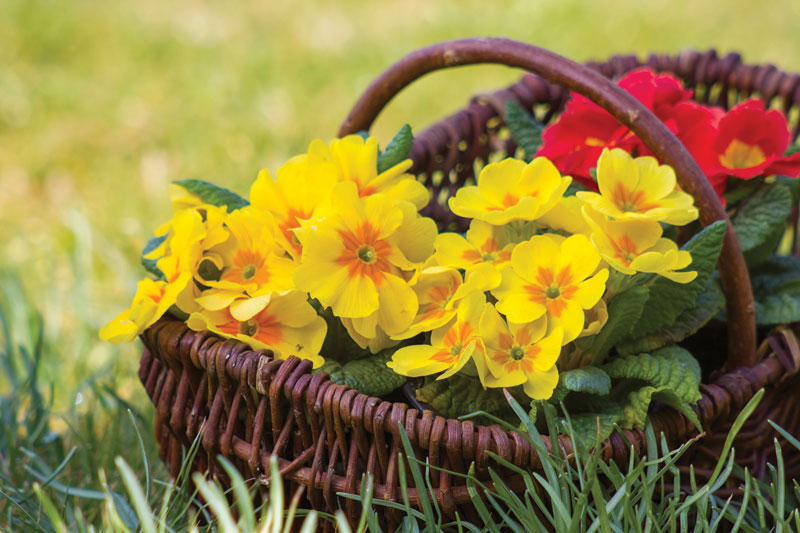 Warmer days are we hope on the horizon and Elly West looks forward to the first flowering perennial of the season, the primrose, a sure sign that the garden is about to come to life.

Spring is finally on its way and, to prove it, we see the first flowering perennials, our much-loved primrose, or Primula vulgaris. I love this time of year for spotting the plants that mark the changes of the seasons. They are few and far between so all the more noticeable and enjoyable. When the primroses come out under the magnolia tree in my garden, I know that the fun is starting for the year. Primroses are easily recognised as one of our common native wildflowers and are seen beneath hedgerows, in woodland clearings and on grass verges across the country. Their cheerful creamy-yellow flowers are an important nectar source for butterflies and early foraging bees and they have a simple beauty that calls out for a closer look.

As a child I used to love Cicely Mary Barker’s book, Flower Fairies, which was a collection of flower mythology and plant lore. I also loved the colour yellow so Barker’s Primrose Fairy was a firm favourite. It reads: “The Primrose opens wide in spring; her scent is sweet and good: It smells of every happy thing in sunny lane and wood.” Confession: I’m still a fan today.

The name primrose is derived from the Latin prima rosa, or ‘first rose’, although it’s not actually related to roses at all. However, the primula family is a large one, encompassing native cowslips, as well as all the more ornate and colourful cultivated forms found in garden centres and nurseries, including candelabra varieties, beautiful auriculas in jewel-like colours and dusky rare forms with exquisite markings that are highly collectable.

In Victorian times, when there was a whole language using flowers as symbols, the primrose was a flower for lovers. It meant ‘I can’t live without you’. Primroses can be found across the centuries in poetry and literature. John Donne wrote The Primrose, equating the flower with womanhood. Shakespeare’s plays use the primrose as a symbol for youth, femininity, but also early death. In Irish folklore, primroses in the doorway protected the home from fairies, and in 1881 a whole day was named after the spring flower – Primrose Day, held on 19 April, commemorates the death of British Prime Minister Benjamin Disraeli. The primrose was his favourite flower and Queen Victoria sent a wreath of primroses to his funeral.

The Primrose opens wide in spring; her scent is sweet and good: It smells of every happy thing in sunny lane and wood

Primulas are tough little perennials that are easy to grow and care for, and also easy to buy at this time of year, found en masse among the bedding displays in trays in garden centres, as well as outside supermarkets and greengrocers. Whether you choose the traditional pale-yellow flowers, or some of the many brightly coloured forms, they are ideal for giving an instant boost to containers, hanging baskets and window boxes, or at the front of a border, under deciduous trees or along the edge of a path. Once planted, they will merrily self-seed and spread themselves around, coming back year after year. They grow in sun or shade and they’re not too fussy about soil type, preferring slightly damper soils.

Flowers appear from February to May and leaves are often evergreen through winter, although they may die back in exposed, colder areas. Once planted, they don’t need much attention, although some of the cultivated forms will benefit from a diluted solution of tomato fertiliser to give flowering a boost, particularly if they are growing in pots and have been there for a while. Start feeding them as soon as you see the first buds forming, every ten days or so until the first flowers open, then deadhead them regularly to keep them coming.

Growing the cultivated varieties of Primula auricula, often known simply as auriculas, can become addictive, as there are so many colours and forms from which to choose. There are literally thousands of auricula hybrids, and variations include double petals, green-grey edges, borders and stripes. Auriculas were first recorded in England in the Elizabethan period, but became more popular in the eighteenth and nineteenth centuries when collectors and breeders were constantly trying to outdo each other in their search for the perfect flower. ‘Auricula Theatres’ became a thing, as a way to show off the plants – each in a small, individual pot and displayed in rows on shelves. These theatres are still popular today and a quick Google search reveals lots of ‘how-to’ guides, if you fancy making one yourself. A specialist nursery or rare plant fair is a good place to try if you want to start a collection. The next one in Somerset is on 20 March at the Bishop’s Palace in Wells (rareplantfair.co.uk).

Also worth a mention is that the flowers and leaves of primroses are edible. Add them to salads for something a bit different, or crystallise them for Mothering Sunday or as Easter decorations for cakes.

Plant of the month: Magnolia
Magnolias come out in full force in early spring, and the pure white Magnolia stellata, although less showy than some of the larger varieties, is an ideal choice for smaller spaces with its beautiful starry flowers. Also known as ‘star magnolia’, this variety is slow-growing and eventually forms a deciduous shrub up to two metres tall. The buds are amazingly tactile, covered in downy fur, which then open into large, multi-petalled flowers appearing on bare branches before the leaves. Plants prefer sun or partial shade, and neutral to acidic soils, although they can also do well on alkaline soil as long as it’s not too dry. Grow this magnolia as a specimen plant in a pot, in the centre of a lawn or as part of a mixed border, underplanted with small spring bulbs such as Iris reticulata, Narcissus ‘Tête-à-tête’ and grape hyacinths. Choose a sheltered spot, preferably away from strong winds as the flowers are short-lived at the best of times, and can disappear overnight in a storm. Avoid over-pruning, as you might ruin the shape, but if you do need to keep the size in check, cut it back in summer when it’s in full leaf. Also be sure to remove any damaged, diseased or crossing stems.