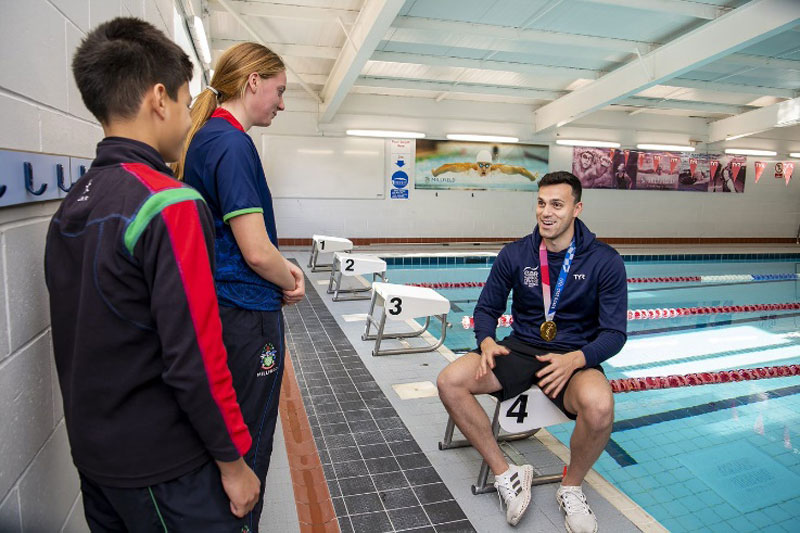 Double Olympic gold medallist James Guy visited Millfield Prep School yesterday to reopen his childhood swimming pool and inspire the next generation of swimmers following in his footsteps. James’ swimming career flourished at Millfield Prep when he joined the school in Year 8, in 2008, followed by five years at Millfield.

Yesterday’s re-opening came after 4 months of work, during which Millfield Prep pupils used Millfield’s 50m pool. This work followed further investment made in the pool in 2018, totalling £445k. There are 120 pupils at Millfield Prep who are on the swim programme, swimming multiple times a week and supported by an expert team of coaches. With the pool also being used by local communities and swimming groups, as well as local children who attend Millfield holiday courses, its re-opening couldn’t come soon enough.

James won two gold medals and a silver at the Tokyo Olympics during the summer to add to his two silver medals from Rio 2016.

Entering the pool to squeals of delight and cheering from pupils, he said: “Millfield has the best facilities I have seen in a school, I’ve never seen anything like it. The staff, great food, the pools kept warm, everything you need to be the best version of yourself. Swimming is not an easy sport, it’s a very hard sport. Enjoy what you’re doing [and listen to Helen!]. I know sometimes swimming can be hard and it’s boring when you’ve got 10 x 200s, but those sessions when you’re tired and you’ve had a bad swim, it’s about looking back and knowing that you’ve done everything right to get to that.”

As well as talking to current Millfield Prep swimmers, James answered questions from aspiring Year 8 swimmers Asta Maddox and Andrew Towers, about his career in the sport and advice for the next generation.

Asta, a day pupil from Wells who was recently selected by Swim England for their national development programmes, said: “I was in awe. He was very inspiring and gave us some really good advice that I am going to take with me through my journey in swimming.”

Andrew, a boarder from Surrey, said: “It’s not every day you get to meet James Guy. He was very inspiring and gave me some great tips going forward.”

Swim England recently warned that almost 2,000 pools could be lost forever by the end of the decade and that there will be a huge reduction in the amount of water space available by 2030.

The Millfield Prep pool was built back in 1966 following a fundraising campaign and existed originally as an open air pool. Albert.R Broccoli, the Hollywood film producer of the James Bond films, paid the remaining £365 of the £2,500 needed to build it, following a visit to the school when his son Anthony attended.