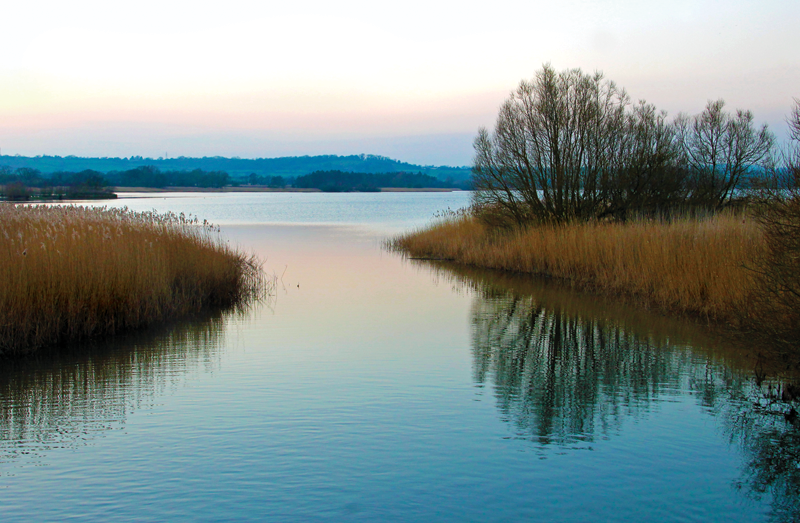 Don’t forget your camera: A walk around Chew Valley

April’s walk is a challenging ramble from the Chew Valley to the heights of Mendip. Starting beside Chew Valley Lake, it heads through fields and along green lanes to West Harptree. It threads its way through Harptree Combe, past an aqueduct built in 1851 to carry water to Bristol and the ruins of a Norman castle.

Leaving the combe, the climbing begins in earnest. Having reached the Mendip plateau, a walk through East Harptree Woods leads to a high chimney, once used for lead smelting, and spectacular views of Chew Valley Lake, over 200m below.

Heading back downhill, fields and lanes lead to East Harptree, whose church contains an elaborate Elizabethan tomb. From there a level walk through the Chew Valley leads back to the starting point.

The starting point is between West Harptree and Bishop Sutton, where the A368 crosses Chew Valley Lake on a causeway, and there is parking on both sides of the road (ST571581).

Head east along the pavement on the north side of the road and carry on along a gravel track. After 250m, by the entrance to New Manor Farm, cross and turn right along a minor road. After 350m, opposite Monksilver Cottage, bear right and follow a signpost through a pair of handgates and across a field (ST576580).

After going through a kissing gate (KG), the official footpath heads straight on, although you may want to bear left to walk round the edge of the field.

After going through a handgate, bear right and carry straight on along the main road for 50m before turning left by the White Rose Beauty Rooms. Bear left along Millennium Way, and, after crossing a playing field, go through a KG. After going through a pair of handgates, follow a track diagonally across a field. After crossing a slab stile, carry on for a few metres before turning right across a stile into Harptree Combe. (ST564563) After an hour or so out in open country, the hidden fastnesses of this combe, with high rocks contorted on either hand, seems magical. With the sunlight filtering through the trees and flashing off the tumbling waters of the Molly Brook, photographers will almost certainly want to linger, and, when the aqueduct comes into view ahead they will be jostling to get the best angle on this extraordinary relic of Victorian engineering. After following a causeway under the aqueduct, as the path starts curving uphill, look out for a yellow arrow on the right and follow it up four steps to continue along the combe. The crag above you is the site of Richmont Castle, built in the 11th century, besieged and taken by King Stephen in the 12th and abandoned by the 16th. Virtually nothing of it survives.

Following a path alongside a leat, the track deteriorates to a muddy scramble, which involves crossing the brook on random stepping stones. After 250m, bear left to follow a waymark up a path hewn out of the rock (ST560557). At the top, look to the left to see a narrow defile, part of a collapsed mine. Carry on across ‘gruffy’ ground created by mining operations, and, after the track drops down towards houses, go through a KG and turn right through another KG beside the drive to Richmonte Lodge. To your left is a ventilation shaft for the pipeline which runs across the aqueduct.

Go through a KG, carry on uphill, and, after another KG, carry on for a few metres before turning right at a T junction along a drive. After passing farm buildings, go through a handgate into what was once a busy industrial site, with lead mines on the right and brickworks on the left. After passing the chimney of Smitham lead works (ST554546), turn left beside a pond to follow a path through East Harptree Woods.

When you come to a rough lane, bear left along it. Turn left at the road, and, after 300m, just past Springfield Farm, bear right through a KG (ST559544). Head down a faint track, go through a KG and continue in the same direction. After going through two gateways, go through a KG in the left-hand corner of the next field and head along a high-banked green lane. At the end, turn right and almost immediately left along a lane.

Turn right at the end and after 250m turn left by Hill Cottage. Follow the lane as it bears right and after 500m you will see East Harptree church – worth a detour to see the 16th century monument to John Newton, moved from the chancel to the porch in 1883.

Turn right past the Waldegrave Arms and left along the High Street. At the crossroads, carry on along Townsend. After 175m, when the road swings right, go through a KG to carry straight on through a field (ST571564). After a pair of KGs take you across a track, carry on in the same direction, heading towards a handgate and slab stile in the hedgerow. Carry on, crossing another slab stile, and, after walking alongside a brook, go through a KG (ST576572).

After crossing a gated footbridge near where the brook joins the River Chew, carry along a track and bear left past a pond. Cross a footbridge and follow a track heading to where the hedge on the right juts into the field. When you get there, carry on alongside the hedge. After going through a handgate, turn left along a broad strip of grass. Continue along the lane, and, at the main road, cross and turn left to return to the starting point.

Level of challenge: muddy, rocky and waterlogged sections may be encountered, as well as some livestock; sturdy waterproof footwear essential.