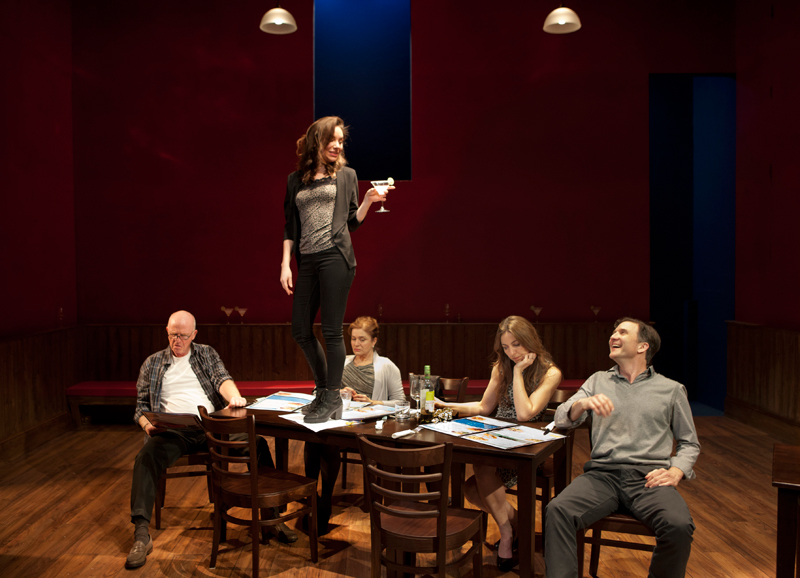 It’s a complicated tale but ultimately it could be perceived as being incredibly romantic,” says director Michael Boyd as he starts to explain the storyline of his directorial adaptation of Korean playwright Hansol Jung’s 2014 digital-age drama Wild Goose Dreams, which premieres in the UK at the Ustinov Studio on 21 November direct from an acclaimed off-Broadway run. “It’s a wonderful interrogation of the concept of love.”

Now I hadn’t expected our conversation to open on such a lighthearted tone. While I’m well aware that one should aim to distance the artist from the art (you wouldn’t turn down an offal’n’chianti supper with Anthony Hopkins, would you?) I was wholly prepared for Boyd – whose illustrious CV includes a decade-long stint as artistic director of the Royal Shakespeare Company and who is known for confronting theatre-goers with some assiduously thought-provoking dramas – to be a bit, erm, serious? But while he’s clearly serious about his work, the man who was knighted in 2012 for services to drama is, IRL (and it’ll become clearer why I’m using internet chatroom parlance here later on), as friendly and buoyant as theatre front of house staff ten minutes before curtain up.

“You have to maintain an appropriate distance from whatever piece of work you’re working on,” he says. “If you’re doing Macbeth, you don’t want to be living like a murderer for five weeks, do you? But with all plays, you have to dive straight in and swim under the water of it when you’re in rehearsal, but when you leave rehearsal, you need to surface into fresh air. And it’s actually quite interesting to notice that the points in rehearsal where actors get the giggles are quite often the most appalling moments of emotional intensity – it’s a safety mechanism, I think; relief that it’s not you, it’s just your character. It’s important to be able to leave it all behind at the end of the day, just like the audience has to leave it behind when you exit the theatre – most people leave ready for a giggle, but a squabble can work equally well.”

While Wild Goose Dreams digs deep into the heart, it’s painted with a lighter touch – a lighter, keener Asian brushwork

But as our conversation turns back to the Wild Goose Dreams storyline, it becomes clear that this time around, the giggling or squabbling might be replaced by the need to wipe the odd tear away from our eyes…

“The play focuses on two very lonely people,” Boyd explains. “Nanhee is lonely because, as a defector from North Korea now living in the US, she feels like a fish out of water. She’s done really well for herself, she has a good job, but she still somehow feels that she doesn’t necessarily totally fit in; she’s missing home, and she’s worried about her family. And then she meets Minsung on the internet: he’s married, he’s living in South Korea, and he’s what’s called a ‘Gireogi Appa’ – a Goose Father. Basically a Goose Father is somebody who has a good job and quite a lot of money but lives very poorly while his children and wife go abroad, usually to an English-speaking country, to further their education. Minsung’s family are in the United States, so he’s lonely too. But these days, in the midst of all the online malaise, with all the conversations that we can have on social media and all the ways to talk to other people on the internet, you can’t imagine that anyone could ever be alone… and these two don’t have to be alone. So they start an online affair, but partly because it’s an internet romance and partly because of their circumstances, they’re both quite suspicious of this love. And of course, in a way, it’s about typical opposing behaviours in the north and south of Korea. The mismatch is ridiculously funny – on one level, it’s a classic ‘odd couple’ comedy. But without giving too much away, I admit that it’s got quite a bit of a sting in the tale…”

Ah, see: I wondered where the sting in the tale would come in. Or did I? While Boyd’s 2018 production of Christopher Marlowe’s Tamburlaine was one of the most seductively savage dramas I’ve ever seen, he was also responsible for first bringing Matilda, one of Roald Dahl’s best-loved characters, to on-stage life at Stratford on Avon back in 2009, during his RSC stint. Is Boyd the ultimate protean dramaturge?

“You’re very right in saying that I tend to direct plays that focus on the underlying unease or hostile dynamics that are often only just beneath the surface of relationship connections,” he says. “Of the plays I’ve directed at the Ustinov Studio, The Big Meal (2014) was about a family falling apart over the years but still looking for ways to hang on to each other. The Harvest (2015) was an extraordinary tale about keeping relationships warm – can we look after ourselves and each other as we would like to look after an orchard? And Right Now (2016) was a deeply disturbing psychodrama. But while Wild Goose Dreams digs deep into the heart, it’s painted with a lighter touch – a lighter, keener Asian brushwork, if you like.”

I wonder if Boyd’s latest work could perhaps be a reflection of where he’s at in both professional and personal terms right now. There’s a distinctly carefree cadence in his response to a question about how he likes to spend his downtime (“nothing particularly spectacular, really; I just enjoy being with my family, my kids and my wife, or cooking, or reading, or walking – I like walking, and thinking”), and a similarly refreshing attitude to the freelance pace that’s replaced the responsibilities of his RSC hot-seat position (2002–2012). “I have more of a dilettante role these days than I had at the RSC, where I was responsible for a large company,” he says. “Now I’m just the hired gun coming in to work on the piece in hand. But I’ve been very lucky to have the support of the Ustinov Studio, where I’ve been allowed to do pieces of work that an awful lot of other theatres would have been just too scared to do, not because of questionable content or contentious politics, but just because they weren’t necessarily commercial beasts; several have been international works that don’t necessarily present entirely familiar scenarios to people. Ustinov Studio’s artistic director Laurence Boswell has allowed a really important body of international work to see the light of day.”

So who is Wild Goose Dreams most likely to appeal to? “I’m not sure that there’s a particular target audience really,” says Boyd. “I mean, it speaks to me as a man of 60+, but the author is only just 30, and she’s talking about a very contemporary world. But I think that the loneliness of the two central characters and their story of finding love has universal appeal. To be very specific, it’ll resonate with everybody who uses the internet but particularly, perhaps, people who are uncomfortable with that world, or get lost in it, or get addicted. And it’d certainly be a right old hoot for anybody who’s done internet dating.”