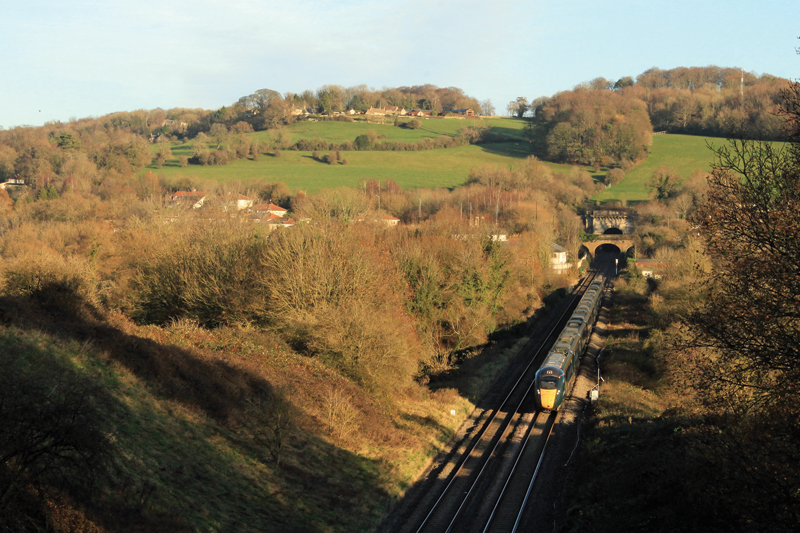 Box once had a population of 1,300, but after Brunel’s Great Western railway opened in 1841 things were set to change, and dramatically, says Andrew Swift, who traces the village’s history in this month’s walk

In 1841, as Bathonians celebrated New Year’s Day, many would have been eagerly anticipating the opening of Brunel’s Great Western Railway, which would cut the journey time to London from 10 hours to just three and a half. Most of the line was already built. Only one thing stood in the way – Box Tunnel, which was proving a greater obstacle than even Brunel had foreseen.
In a last push to get it finished, he brought in 4,000 men to work on it around the clock. The impact that this concourse of navvies had on a village with a population of 1,300 can hardly be imagined. When the line opened six months later, however, life would never return to the old normal. Digging the tunnel had revealed previously unsuspected deposits of Bath stone, while the newly opened railway offered unprecedented opportunities for shipping it all over the country. Box was set to hit the big time.

This January, to celebrate the extraordinary transformation that Box was undergoing 180 years ago, we head to the village to see how the building of the railway changed it forever, as well as seeking out a few other surprises in this often overlooked corner of Wiltshire.

To get to the starting point from Bath, head east along the A4. As you enter Box, carry straight on along the A4 at the traffic lights, but after 100m turn left down Valens Terrace, following a sign for Selwyn Hall (ST824686; SN13 8NT). Having parked in the car park on the right at the bottom, walk back up to the road, turn right and then right again down Church Lane. If you decide to go by bus, get off at the first stop after the traffic lights, walk back past the top of Valens Terrace and turn right down Church Lane.

This is one of the oldest parts of the village. Springfield House, on the left, now converted to flats, was built in 1729 as the village poor house. The cottage beyond it, adjoining the churchyard, was Box’s first school, opened in 1719.

Carry on along the lane past the church of St Thomas à Becket. The Wilderness, hidden behind magnolia and wisteria on the right, was a childhood home of the Rev. W Awdry, creator of Thomas the Tank Engine. The ruins of a Roman villa survive in its luxuriant grounds.

At the end bear right down a rough path, cross a footbridge over the By Brook and go through a wooden squeeze stile with a sign warning of a bull. Although there is a bull, it seems placid, and, as these fields are popular with dog walkers, it is used to company.

Bear left to follow a faint track across the field and go through a kissing gate (KG). As you walk through the next field, you will see the western portal of Middle Hill Tunnel on the right. After going through a KG at the end, continue through a tunnel (known as the Dirty Arch) under the railway. Once through it, the path runs alongside a field with an eclectic selection of domestic fowl before passing a pair of cottages. At the road turn right to follow a footpath which curves away from the road before rejoining it a little further up. Just past the entrance to Ardgay House turn right along an overgrown path.

After going through a KG, turn left alongside the fence, follow steps up to another KG, and, once through it, look to your right for another view of Middle Hill Tunnel. After 150m, turn right at a footpath sign (ST820688). A little way downhill there is a panoramic view of the line with Box Tunnel in the distance. Carry on downhill through a KG, heading straight on, but when you come to a crosspath part way across the field turn left along it.

At the end of the field, go through a wooden KG, cross a bridge – shared with the railway – over the By Brook, and carry on along alongside a tributary brook. At the lane, a short diversion under the bridge on the left leads to Box Mill, which since 1987 has been home to Peter Gabriel’s Real World Studios, which attracts some of the world’s finest musicians to this quiet corner of Wiltshire.

Head back under the bridge and carry on up the lane. When the pavement ends, carry on up a couple of steps and past a row of houses to the main road, opened in 1761 and carried across the valley on an embankment.

Turn left, looking out for the splendid Victorian traction engine preserved in the garden of a house across the road. After 250m when you cross the railway, you can see that the portal of Middle Hill Tunnel is much higher than tunnel itself. This is also the case with Box Tunnel, to your right, although here the interior is hidden in darkness.

A little further up, you cross a turning to the Wharf. The wharf in question was a railway yard where stone, brought down a tramway from quarries on Box Hill, was loaded into wagons.

Just after the next turning (to the Bassets), cross the main road and go through a KG (ST828690). Keep close to the fence on the right as you head uphill and, after going through a KG, you will find yourself above the mouth of Box Tunnel. Although the view is hidden by vegetation, if you bear left uphill, keeping close to the fence, you will soon have a superb view of the line, which improves as you climb. At the top of the field, go through a KG a little way along on the right.

As you turn right down the lane, the first Grade II listed structure you pass, after 200m or so, is a mid-19th century sewage ventilation stack, easily mistaken for a lamp standard, although its flared top reveals its true function. Price’s factory, further down, is the only place in the UK where tennis balls are still made (ST828686). It was originally Vezey’s candle factory, which supplied a ton of candles a week to the navvies digging Box Tunnel. On the right is Pear Tree Cottage, one of Box’s most delightful 17th-century survivals.

Take a left turn here, and immediately turn right down an alleyway known as Glovers Lane – too narrow for carts but wide enough for packhorses – which leads to the heart of the old village. At the bottom on the right is the Old Chequers Inn, closed over 20 years ago but still sadly missed. As you carry on through the Market Place, look through the gateway of Dodd’s Yard to see the old Box Brewery building. Then, after passing the butcher’s, look out on the left for a superb shell porch on Frogmore House.

When you come to the main road, two of Box’s finest 17th-century buildings lie opposite – the old Manor House and a converted barn. A little further on is the Queen’s Head, the only pub left in the village centre. The blind house just beyond it is where those who had imbibed too freely had to pass the night. The Old Sweet Factory, on your left, was originally the stables of the Queen’s Head. More recently, it was a public convenience.

A little further on is the pharmacy, where you can catch a bus back to Bath. Otherwise, cross and head down Valens Terrace to return to the car park.

Much more about this fascinating village can be found at boxpeopleandplaces.co.uk.

The story of Box Tunnel is in Andrew Swift’s The Ringing Grooves of Change: Brunel and the Building of the Railway through Bath, published by akemanpress.com.