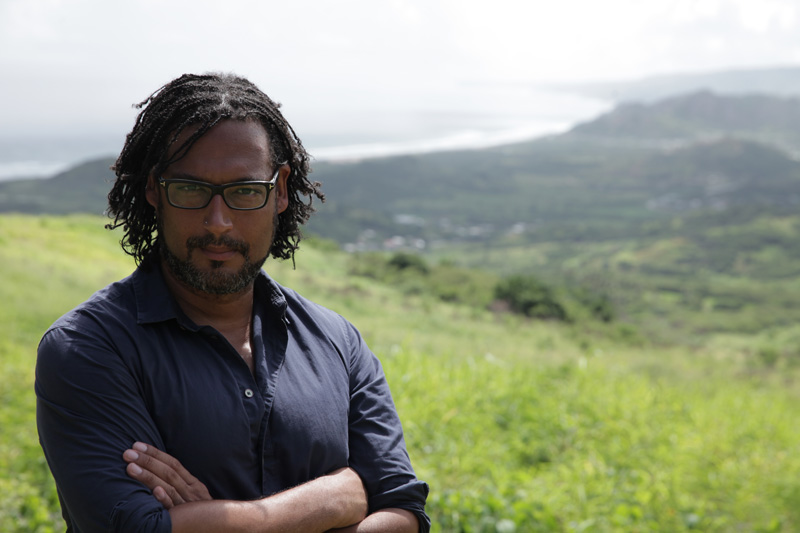 Historian, writer, presenter, broadcaster and Professor of Public History at the University of Manchester, David Olusoga seems to have it all, but he sees himself as a survivor rather than as a success story. Emma Clegg asks him about the racial inequality within the television industry that his recent powerful James MacTaggart Inaugural Lecture dissected

There are many who have a voice within the TV and media industry, but not so many of those voices are black. And when one of those voices is selected to give the James MacTaggart Inaugural Lecture for the Edinburgh TV Festival, as David Olusoga was this year, that voice has a unique platform.

This event, which brings together all parts of the television and digital world to debate the major issues facing the industry, is a gig that matters. In his lecture Olusoga explained his own experience as a black man working in television and how his treatment by the industry led to clinical depression. He said that marginalisation is leading to people of colour leaving their work in television and warned that the TV industry has to share power with a Black, Asian, and minority ethnic community or risk losing the entire next generation of viewers, and face obscurity.

He describes preparing the lecture as one of the most difficult challenges of his life. “To deliberately talk about difficult periods of my life and to talk about mental health when I didn’t need to, when nobody knew about this, was to do something that was very exposing. So I feel very uncomfortable having done it, but I decided it was worth doing because it would have been dishonest to talk about those issues in the year of Black Lives Matter to my industry and to pretend that those issues had never affected my own journey.”

Olusoga is unwilling to direct criticism at individuals in the TV industry, seeing the problem as systemic. “These are failings over 30 years, many decades, a period over which the industry could have properly addressed the issues of inclusivity and diversity. But many of those in television now have only been in those positions of power for a couple of years. So it’s not right to blame people in power now for the mistakes of the past.

To deliberately talk about difficult periods of my life and to talk about mental health when I didn’t need to, when nobody knew about this, was to do something that was very exposing.

A new clarity was brought about by the landing of BLM and the protests in the UK and people in power in television have made commitments. And let’s just see if the people in power over the next couple of years see those followed through.”

“This is the biggest issue facing the industry and – alongside the pandemic – the biggest issue facing the country. This is like rolling thunder – it’s moving from country to country and institution to institution and the TV industry is not alone. We also have to look at the world of art and creativity and heritage and historically those sectors have not done very well – it’s not a great record.”

Olusoga makes powerful reference in his lecture to “the decades of false dawns and unfulfilled industry pledges to tackle inequality”, but this year he has seen a real shift that gives him justified optimism. “I do have a sense of optimism about the future because I think this is a generational change. This is coming to a generation who see race differently. And who are willing to have the conversations with their parents and grandparents that generations weren’t willing to have before, and that’s the great hope. How complete this process is will depend on how much pressure is put on power, because power never yields without pressure. But I think this generation who feels very differently about these things is coming of age. And in 10 years time they will be running everything.”

Edward Colston’s statue, toppled unceremoniously from its plinth in Bristol, did so propelled by the energy of the global rise of the BLM movement, further to the death of George Floyd in Minnesota in May. Olusoga is not sorry to see the statue gone. “The number one reaction I’ve had from people who have written to me was that they couldn’t believe we had the statue of a 17th-century slave trader up on display in the first place. They couldn’t believe that in the 21st century this was OK. I’m pleased that this became known when the statue was removed, however it should never have come to this. It should never have come to the statue being toppled in the way it was. It should have been put in a museum decades ago.”

Pointing out that Colston’s slave trading activity – which was primarily focused on The Royal African Company in London – wasn’t in fact directly linked with the harbour in Bristol into which he was plunged, Olusoga still sees the poetic justice. “It’s incredibly poetic that a slave harbour from which 2,000 slave expeditions left was the temporary watery grave of one of the most prolific slave traders in British history.”

This is like rolling thunder – it’s moving from country to country and institution to institution and the TV industry is not alone.

I ask what he would like to see installed on the empty plinth. “I don’t see the point of putting another statue on the plinth. Heroic statuary is a defunct art form,” Olusoga maintains. “It is about individuals rather than artistic interventions. They are invisible to us because they are a defunct form of memorialisation. A statue says ‘this was a great man’. Do we really want to uncritically celebrate people who are mass murderers?”

“People don’t care about statues until somebody talks about toppling them and suddenly they look them up on Google and get very angry about it. I always say if you care about statues and their history then you should name them. People can’t name the other statues in the centre of Bristol. It is a false rage about a defunct form of artistry.” Olusoga likes Banksy’s suggestion for a slavery memorial that would incorporate Edward Colston and the protesters who tore his statue down. Other ideas are proposed, including the People’s Platform, which would showcase on the plinth the diverse visions of today’s Bristolians, brought to life digitally and on rotation.

Olusoga has recently been made patron of Bristol’s Festival of Ideas. “I’ve long been a supporter of the festival and someone who has gone to lots of talks for many years – it’s one of the things that makes Bristol such an exciting and interesting place to live. It is a remarkable thing. You can go to a venue in Bristol almost every week and see somebody who otherwise you’d have to search out on TV or on YouTube and you can see them talking about their books and their ideas and they’ve all been lured to Bristol to be part of this endless ongoing phenomenon.”

Many of the events this year and next will be virtual ones, however, and I ask how effective the virtual experience of events and lectures has been. “It has been far more effective than I think anyone imagined in March. It is possible to use this technology in this way. It obviously doesn’t make up for the excitement of a live event but I still think we’re never going to go back to a time when we do events and we won’t be streaming them as well.”

It’s incredibly poetic that a slave harbour from which 2,000 slave expeditions left was the temporary watery grave of one of the most prolific slave traders in British history.

“I’ve virtually attended things that I wouldn’t have attended physically. Every week I listen to Intelligence Square debates and discussions and I probably would have gone to one of their events a year. So it doesn’t make up for it, but it is an incredible stop gap and I suspect that all events will be a combination of the two from now on. And, importantly, it is a lifeline which is helping events like the Bristol Festival of Ideas survive during this period.”

Olusoga’s book Black and British: A Forgotten History, tells the story of the long relationship between the British Isles and the people of Africa and the Caribbean and he has just finished writing a children’s version of the book. I ask whether the history syllabus within schools is falling short on delivering a representational black history. Olusoga is at pains to admire the efforts of individual teachers: “I have met hundreds of teachers who are making incredible efforts to deliver to their very often diverse classrooms a history that makes sense of everyone’s stories. So any criticism I have of the curriculum is not a criticism of teachers.”

“The problem is that history has always been political, always part of a curriculum where people have thought about the functions it could perform rather than just the importance of learning about the facts. It is wanting in teaching the imperial colonial aspects of British history. How can you make sense of anything about the Empire, how can you make sense of the Industrial Revolution without talking about the money that came from British slavery and the cotton that came from American slavery? It doesn’t make any sense – it’s a critical omission that is short-changing a generation of young people.”

I have met hundreds of teachers who are making incredible efforts to deliver to their very often diverse classrooms a history that makes sense of everyone’s stories.

A House Through Time – of which there have been three series, the latest in a house in Guinea Street, Bristol, with a fourth series in Leeds showing in 2021 – is Olusoga’s comfortable prime time slot on TV. It takes a house and uncovers its history, so it becomes a living, breathing entity where you feel the stories of those who lived there. How does he feel about the series and its success? As ever, he places credit where it’s due, “It is a brilliant series; it wasn’t my idea, it was a clever woman called Emma Willis.”

“It has changed since it was first devised because I felt that it would only work if I cared about the people. I wanted to show that these people were real people, not just figures from the past or characters we made up, but these were things that happened in their life. And if you stand in the house where somebody lived and walk up using the banister that they held and touched the front door that they touched and read their letters and the documents that affected their lives, often tragically, and if you cannot feel anything, then history isn’t your thing. So it’s not reasonable for me as a presenter to expect anybody to care about these people if I don’t.”

“In the first series I found where some of the people had been buried and I went one night to the cemetery where their graves were and I thought about them and I left some flowers. It’s about remembering that these people are real. Being someone who is in a position to publicly talk about their lives, often about the tragedies in their lives, is an imposition that demands a huge amount of respect.”

Respect is what’s needed and David Olusoga has it in spades. As a human being and as a spokesman for injustice and the critical issues of the day.