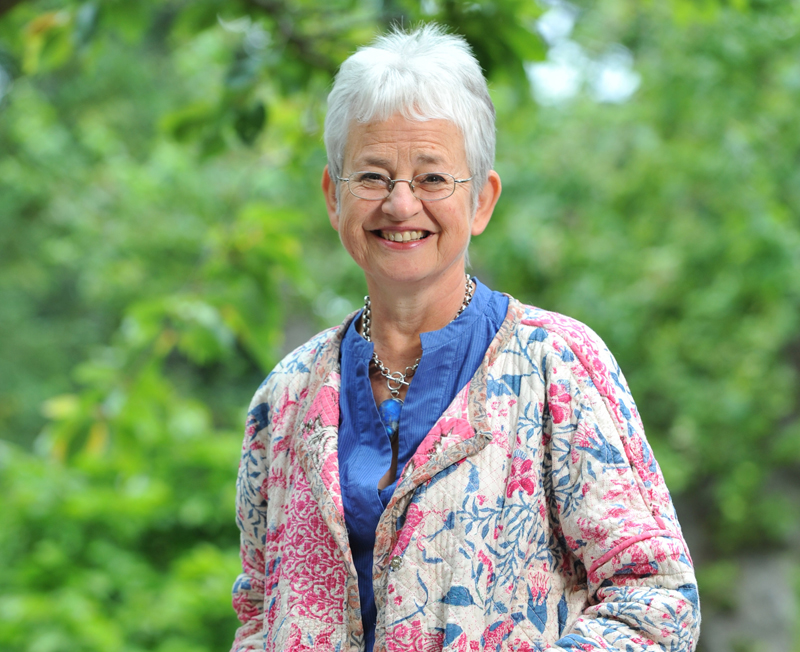 Dame Jacqueline Wilson talked to Georgette McCready ahead of her visit to Bath Children’s Literature Festival, about the daily discipline of writing and where her characters come from

Dame Jacqueline Wilson has delayed our phone interview by an hour – but for a very good reason. Dame Shirley Williams had rung to say she used to have friends who lived in her house and would Jacqueline mind if she called round to take a look?

So, while I’m talking to best-selling author Dame Jacqueline on the phone, another dame, politician Shirley Williams is happily wandering round her garden.

Children’s favourite and creator of popular characters including Tracy Beaker, Hetty Feather, The Illustrated Mum and many many others, Jacqueline’s latest book, Wave Me Goodbye is the first she has set in the Second World War, a time of the worst conflict in history. It tells the story of Shirley, a ten-year-old, who’s sent away to the country as an evacuee.

Why did she chose this period in time to write about for the first time? “I grew up after the war, but I knew a lot of people who had been evacuees and this experience had had a profound effect on them. I began to wonder what it must have been like to leave your home and your mum and dad.

“I had read Nina Bawden’s Carrie’s War and thought, ‘no this has already been done’ but it haunted me. I had seen photographs of children being evacuated, wearing labels and carrying their suitcases. And then I decided that I would tell the story, in my own way. I loved writing the book and it made me wonder how today’s parents would feel about sending their children away.

“In the Imperial War Museum I saw a poster that said Mothers Send Your Child to Safety in the Country, so I suppose you would because you wouldn’t want your child to be bombed.”

“It’s almost like making a new friend, you get the first impression, then you get to know them better . . . characters often take control themselves…”

In Wave Me Goodbye young Shirley writes letters home to her mum. Was it this experience that prompted Jacqueline to theme her latest creative writing competition for children around a letter writing challenge?

“We ran a creative writing competition last year and it was very popular. I think that the art of letter writing has largely been lost. Children tend to text, phone or Skype. But I know that a lot of adults twit if they don’t receive a thank you letter when a special present has been sent. I hope this competition will give free rein to their imaginations.”

As a profilic writer – Jacqueline has written more than 100 books – does she have a routine for writing? “I do write every day, which may be very irritating I suppose. But I like to do it at the very start of the day. I quite like to sit propped up in bed and write and the story seems to flow then. I’ll write for an hour or so. Of course there is endless other work to be done during the day but I know if I’ve got on with that draft first thing I’ll feel better about it.”

Which comes first for her when she’s writing, the character or the situation? “Well, in Wave Me Goodbye I started by wondering what life would be like for an evacuee. Almost immediately I begin writing and the main child will emerge. It’s almost like making a new friend, you get the first impression, then you get to know them better. It sounds fey but characters often take control themselves.”

Before a book is completely finished Jaqueline hands a draft to her long-time collaborator Nick Sharratt, who has been illustrating her books and creating her covers for more than 25 years. “I trust Nick,” she says, “he’s the first to read the book. I don’t put much description in my books so Nick has his ideas. To be honest I have never thought ‘oh, she doesn’t look like that’ of a character when I’ve seen his ilustration. I simply see his cover illustration and immediately recognise the character.”

Publishers need to see a cover even before the ink’s dry on the story, as Jacqueline wisely observes that readers do judge a book by a cover. “I think it’s important that a cover should appeal to children.”

Hetty Feather’s Christmas is cleverly tucked in time between the first time we meet our heroine aged about ten and when she’s 14. In it Hetty spends a glorious Christmas in a wealthy Victorian household and passes time with another of Jacqueline’s heroines from another book, Clover Moon. “I love it when characters from other books can get into the story and meet up – and children love it too.”

Many of her books tackle different issues that children face – their parents breaking up, the threat of domestic violence, mental illness – “I don’t sit down cold bloodedly to choose an issue, but I do think that if I had a happy character with a full compliment of parents and content, well adjusted siblings, that it might not make such an interesting story.”

“I am very interested in children’s minds, how they work and how they react. For example, I heard a child talking about being a bridesmaid and that inspired me to write a book for younger children (Rent A Bridesmaid) thinking about both the joys and the horrors of being a bridesmaid. There is the sadness there in among the pretty, girlie bridesmaids dresses.”

A writer for all her life – she wrote her first book aged nine – what did Jacqueline read as a girl of nine or ten? “I was about ten when I read Ann Frank’s diary. She meant a great deal to me. I had her photograph by my bedside, it was just cut out of a magazine, but I really admired her. I loved the girl classics, Little Women, What Katy Did, The Secret Garden. And then when I was about 11 I discovered I Capture the Castle by Dodie Smith. And there is the 17-year-old Cassandra Mortmain writing her diary and that opening sentence: ‘I write this sitting in the kitchen sink’ just grabbed me. I was hooked.”

Just as her legions of fans, young and not so young, are to her warm, life-affirming stories that reassure her readers that it’s OK not to be ‘normal’, that yes, people do live with challenges in their lives and with sadness too.

As she leaves to go and retrieve her fellow Dame from her garden Jacqueline enthuses about Bath. “I was born there, but left when I was a baby. I love Bath, it has very good bookshops and I love the American Museum. Sadly I never seem to have much time to explore, so hopefully on my next visit I will be able to spend a bit more time there.”

Jacqueline’s website has more than 290,000 members and offers a lively interactive centre for its fans, who are generally girls aged eight to 13. Parents and guardians will be relieved to hear that every care is taken to allow fans to adopt user names so they can enjoy using the site safely. There’s even a random name generator, which I couldn’t resist trying. For the record, my new Jacqueline Wilson identity is Daisy Moonlight Daisy.

Jacqueline will be in Bath on Saturday 7 October, at 10.30am in the 1,000 seater Forum, as one of the undoubted highlights of the Bath Children’s Literature Festival, when she’ll be speaking about the latest Hetty Feather’s book and about Wave Me Goodbye.

Tickets are £8 from: bathfestivals.org.uk or tel: 01225 463362. There won’t be a book signing after the event but instead the 71-year-old writer has arranged for printed bookplates with her signature on to be available on every book bought in the Bath Festival bookshop.