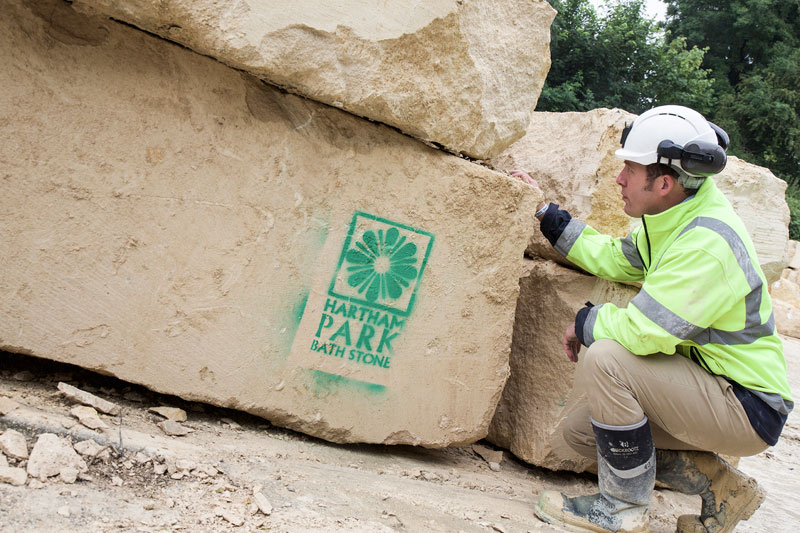 Our city’s precious resource: How Bath stone is hewn

Locally sourced is one of the buzz phrases of our time. We want to know that the cheese, ale and bread on our plate have been produced by artisans, keeping our food miles down, our local economy afloat and our conscience at peace.

How many of us spare a thought then for the ultimate locally sourced, natural product – the Bath stone that has been used for centuries for the city’s distinctive honey coloured buildings? With the celebrations for the 250th year of the laying of the Bath stone foundations for the Royal Crescent ringing in our ears, now seems as good a time as any to take a look at where Bath stone comes from.

In true Blue Peter presenter style I discovered that there’s a hive of activity at Corsham, where the Hartham Park underground quarry is currently cutting and excavating the ancient limestone in readiness for the homes being built at Holburne Park, the former Ministry of Defence site off Warminster Road, Bath. Stone from this quarry is currently being used in the restoration of Windsor Castle and stone from the site was also used in the Pump Room in Bath, Bristol Museum and Art Gallery and, in 2000, for the Queen’s Gallery extension at Buckingham Palace.

I went to meet Simon Hart, managing director of quarry owners the Lovell Stone Group, where we left the bright early summer sunshine by the site offices off the Bradford Road in Corsham and climbed down a flight of 158 stone steps – the equivalent of a 12 storey building – underground to see the quarrymen in action.

Simon’s family business owns four other quarries across the south west of England, taking over the rights to quarry at Corsham last year. I queried whether – given that we’re underground – this was a stone mine or a quarry and Simon explained that since Victorian times there is a legal and official difference between quarrying and mining.

He said: “I am fascinated by the history of quarrying and of this site which is the oldest Bath stone quarry, being worked since 1810. In those days every piece of stone was hand cut and sawn. They used pickaxes and hand-held saws. Conditions for those quarrymen were incredibly tough.

“It’s still a very harsh environment,” he added. “The men go down those steps in the morning for their shift and don’t see daylight for eight or ten hours.”

While this is no tourist attraction, Simon does welcome visits from architects – “it helps them to see another part of the story,” he says. Before you descend into the earth visitors watch a safety film to remind them of the very real hazards faced in stone quarrying. The giant tunnels are precision cut with massive electric saws, the roof pinned at regular intervals and carefully monitored for any movement in the earth. Water levels are also watched and everyone who enters the mine is subject to a rigorous checking in and checking out process. Ventilation, naturally, is of prime concern to ensure the teams working in the dimly lit caverns get enough fresh air to breathe and fire is, naturally, the biggest concern after rock fall. As a result, in addition to ear defenders against the noise of machinery and masks to protect from the stone dust, each worker carries an emergency respirator as a precaution.

Watching these skilled men in action handling the powerful machinery and vehicles like giant Tonka toys, you’re aware of the physically challenging environment they’re working in. Simon is proud that of the ten men working here, some have worked together for 20 years, forming a close-knit team and training the young apprentices in their multi-skilled tasks. “All the men are local. We have fathers and sons working for us and we’re proud to see the progression as youngsters join us.”

There is a cosy mess room built underground, with electricity and running water and where the crews can take a break, use wi-fi and get a phone signal to the outside world.

Fortunately, as the quarry tunnels all look similar to me, Simon knows his way around the maze and leads me through a small opening into an older set of tunnels, dating back to the early 19th century. The marks cut by hand are still clearly visible, there’s an old massive hand winch abandoned here, its top still embedded in the roof of the cave. And there, caught in the beams of our head torches, are graffiti and drawings dating back to the Second World War when the navy stored its munitions down here.

Enormous blocks of stone, weighing nine tonnes or more, are winched up to the surface, from where they are bar-coded and taken off site by lorries to masons’ yards where the stone will be cut down to the appropriate size for use in construction.

Some of that stone will end up at Holburne Park, where architect Robert Adam, said of his designs for the new site: “We believe that we are adding something new to the classical legacy of Bath, in the same tradition as the Georgian era but interpreted for modern needs.”

While it’s exciting to realise that this locally hewn stone is soon going to form part of someone’s house, I also wanted to raise the question of sustainability and to talk about the Combe Down case.

In answer to the first question, Simon showed me the map of the existing tunnels that lie under Pickwick and the east of Corsham. The area is honeycombed with myriad workings, but he says, there is much much more scope to contine responsibly quarrying Bath stone.

As for the historic Combe Down mines scandal, in which residents found their gardens, roads and homes literally undermined by unsafe caverns and huge sums of money had to be spent on filling in and shoring up, Simon assured me that careful attention is paid to distances between digging to retain full support. Waste rubble and loose stones have been packed in as filler and ballast once quarrying has been carried out. Each site is mapped and accounted for.

“I’m happy to say that ours is a closely regulated industry and that we have enough capacity to go on producing Bath stone for future generations to enjoy.”

The marketing pavilion at Holburne Park is open daily, its Bath stone facade and pillars made from Hartham Park stone. There will eventually be more than 200 homes. The first phase of 35 two, three and four bedroom homes is under construction, with prices starting at £480,000. The agent handling the property sales is Savills.