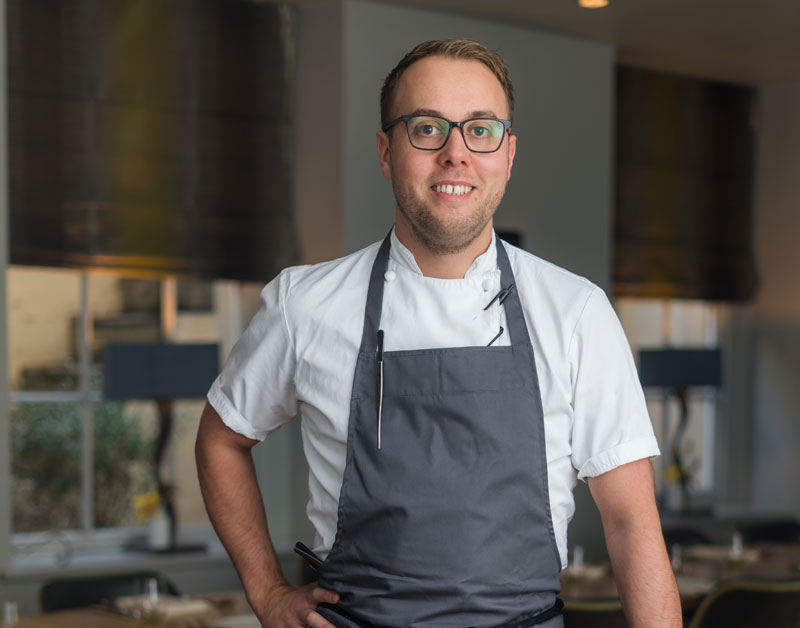 Chris Cleghorn: Cooking on a star

Chris Cleghorn, head chef at the Olive Tree Restaurant, has recently been awarded a Michelin star, the most revered accolade in the restaurant world. Melissa Blease chats to Chris about the path to stardom

Clermont-Ferrand, 1889: brothers André and Édouard Michelin founded a tyre company in central France. In a dazzlingly entrepreneurial effort to boost sales by generating an increased interest in motoring, the brothers produced a little guide packed with handy information for motorists, including practical tips such as how to change one of those all-important tyres alongside nifty little recommendations for where to eat or stay en route.

Food world, 2018: The Michelin Guide – for which 120+ inspectors eat around 250 meals every year in more than 40,000 restaurants and hotels across three continents – is the indisputable, upper-crust foodie bible, responsible for the star rating that can make the fortunes of the chefs working in the hottest kitchens around the world. In October this year, Laurence and Helen Beere – head honchos of the super-stylish little independent restaurant that’s thrived for many years below (and as an intrinsic part of) the independent boutique hotel The Queensberry – announced some very big news. Having been head chef at the Olive Tree for more than five years, Chris Cleghorn had earned his kitchen a Michelin star – the only one awarded in Bath in the 2018/19 roll call, one of only 97 awarded outside of London, and one of only 15 new names to be added to the illustrious list this year.

“To put it mildly, I’m still just over the moon about the news,” says Chris. “In a way, I still can’t quite believe it. But then again, the whole Olive Tree team have worked towards this moment for a very, very long time.”

And it is indeed an accolade that requires a massive amount of hard work and dedication to earn. Despite the Olive Tree already being the holder of 3 AA Rosettes (a remarkable achievement in itself), Chris tells me that at the start of this year, he was at a point where he was thinking that if he didn’t get a Michelin star in 2018, he was never going to get it. So what did he do to change that mindset into a positive force? “To a degree, I think I know how I did it,” he says. “I gave myself the time to really develop, because I had a stronger than ever vision of what and where I wanted to be as a chef. I built my confidence, and worked really hard to get my dishes not only to the point where I believed they were good, but where I knew that they were truly ‘wow’ – and that, I suppose is what the Michelin ‘journey’ is all about. And now, for the whole team at the Olive Tree who work so hard day in, day out to do what we do, we’ve been granted a magnificent reward.”

And it’s a reward that we can all grant ourselves… despite what you may think about Michelin-starred restaurants (and price-tag thereof). Unless you’re a dedicated foodie who avidly keeps up with Michelin-related news, there’s a perception that star-spangled restaurants are more about pomp, ceremony and high prices than a modern fine dining experience that’s accessible to all – and a decade or so ago, this assumption might have had foundation. These days, however, this simply isn’t the case as the Olive Tree proves, as the menus (which include vegetarian, vegan and gluten-free options) carry a refreshingly down-to-earth price tag. Fancy an impromptu two-course Michelin-starred lunch between Friday and Sunday? That’ll be £26.50, madam. When you factor in the seductive environment, the most welcoming, well-informed front of house staff and, of course, the quality and style of the food on your plate, it’s safe to say that we’re most definitely on bargain territory here.

“Chris describes his style as being clean, crisp, and bringing together the comfort flavours that he’s always loved with his own twists, turns and a subtle edge of modernity”

“We much prefer to offer amazing food at amazing value for money than price ourselves out of the market,” says Chris. “The Olive Tree attracts all kinds of guests, from locals who fancy a lovely night out to people celebrating very special occasions – and we want to be accessible to all. In most groups too, at least one person these days will be vegetarian, or vegan, or gluten-intolerant, and those people should never be sidelined, or made to feel as though their options are limited. So, even though our margins may be tight, we cater for everybody, all the time – and that’s another element that keeps us pushing forward. I used to worry a lot about putting dishes on the menu that people wouldn’t go for – my raw scallop dish, for example, or my beef tartare – but actually those dishes have proved to be our most popular. If I hadn’t have pushed those boundaries, we wouldn’t have evolved to the level we’re at.”

So where does the inspiration for Chris’s dishes come from? “It’s a mixture of things, from noticing what kind of flavours and ingredients are trending, to just being brave and trying out new ideas,” he says. “Also, I like to eat at restaurants which have chefs that I’ve always aspired to be [Chris was then looking forward to a dinner at Sat Bains’ legendarily innovative restaurant in Nottingham] – I like to be made to rethink what I’m doing, build the confidence to put dishes on the menu that I once doubted people would opt for, and just cook what I know is right – that’s how a chef develops his or her own style.”

Chris describes his style as being clean, crisp, and bringing together the comfort flavours that he’s always loved with his own twists, turns and a subtle edge of modernity. But there’s definitely never any hint of style over substance on his menu; nothing that shouldn’t be on the plate will ever be there, and every single element counts. “If a process or ingredient doesn’t bring anything to the dish, it won’t be included, no matter how good it might look,” he says. And, when asked who his style of cooking might most appeal to, he’s similarly pragmatic: “Everyone!” he says. “Honestly, just everyone. Most of the time on any given service, I don’t know who might be eating with us – in the last couple of weeks, we’ve had food critics, other Michelin-starred chefs and directors from other leading hotels come to eat with us, and they don’t say who they are until the end of the meal. But it really doesn’t matter, because we treat every single diner in the same way. If we didn’t do that, we might as well just close our doors because we wouldn’t be who we are, doing what we do.”

Once all the celebrations have died down, though, might it be possible that an extra edge of pressure creeps in? After all, a star only shines over any given restaurant for just one year; a handful of months down the line, the none-too-small matter of retention – or indeed, the possibility of a double-up – will be on Chris’s mind. Or will it? “I try not to think about that!” he says. “Ultimately, all I want is for people to come and eat at The Olive Tree, have an amazing meal and leave raving about what we do. If people keep doing that, everything else follows – I stress more about that than I do about guides and awards. For too many years I almost forgot that, because I aspired to so much, and wanted to make my mark professionally. It’s almost as though the moment I really realised that what’s most important is to have people eating my food and then going away thinking OMG! was the most important thing of all… then, I got the star. So as long as I keep doing the OMG! thing, I’ll always be doing something right.”