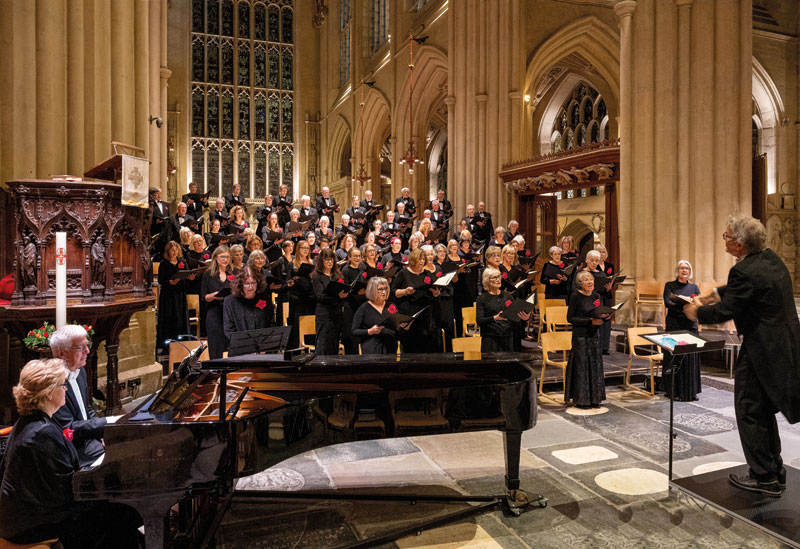 You have been musical director of the Bath Bach Choir since 1990. How do you look back on those years?

When I was invited to become musical director of the City of Bath Bach Choir, as it was called then, I was relatively inexperienced as a conductor. I had been earning my living as the high voice of the King’s Singers until the early 1980s, and then I founded my chamber choir, Bath Camerata, and was teaching singing at Marlborough College and then Wells Cathedral School. Taking on the role of directing a well-established choral society was a perfect fit in my new ‘portfolio career’. I had never conducted a full orchestra, but I learnt quickly and loved it; it was more rewarding being creative with the music than being anxious about my voice holding up, and in many ways it was the start of me stepping into my true self as a musician.

Has the choir changed in character over this period?

Indeed it has! In my early days, the atmosphere at rehearsals was rather serious and formal. When we got to the break in my first-ever rehearsal there was total silence. The atmosphere is more sociable and relaxed nowadays – in fact the coffee break would go on until the end of the rehearsal if I let it! There are some firm friendships within the choir and a wonderful open attitude to welcoming newcomers, who always receive a round of applause when they’re first introduced. We’ve gradually raised the standard over the years, with a lot of focus on vocal technique and building performance skills. So the choir is capable of giving a fine performance across a wide range of musical styles – and it has an amazing heart when it comes to working together to achieve the best possible result.

It sounds as if choral music is your world. When did you first fall in love with this type of music?

I suppose you could say aged seven when my mother made me go into the cold front room and practise singing Panis Angelicus so I could audition for a chorister’s scholarship to Ely Cathedral. I loved being a chorister in that amazing Norman architecture; and besides sport, singing was my main talent.

What is the challenge of the conductor’s art, when did you first conduct, and do you have an individual conducting style?

I have never had a single conducting lesson! I consider myself a sculptor, creating and shaping sounds. It’s mostly about communicating what you want from your singers; what you do with your hands is obviously very important and I also communicate through my face, in fact my whole body. People say I am expressive and detailed as a conductor, and I’m also passionate about performance. There is nothing worse for an audience that looking at miserable faces or the tops of people’s heads as they stare into their music… the singers really need to be able to communicate.

How big is the choir and what is the balance of voices?

The choir has around 85 members. People move on for different reasons, and I regularly audition new singers. Like most choirs we have more female singers than male, but men’s voices tend to be stronger, so we can maintain an effective balance – though I might consider importing some deep basses when singing Rachmaninov!

How much time do the choir members need to dedicate?

We rehearse together once a week for two hours, but singers are expected to do homework and learn the notes before coming to rehearsals. We perform at least three major concerts a year, plus three or more carol concerts at Christmas time, plus we are often asked to help out within the community. It is certainly quite a commitment, but then the more you put in the more you get out.

How does the auditioning process work?

On the surface it’s a straightforward process but actually it’s quite complex. Although I do my best to make it a relaxed affair, singers are often nervous and don’t sing their best. After all, they are rarely solo-level singers. They are asked to sing something simple unaccompanied – perhaps a couple of hymn verses – so that I can get a sense of their voice, and then try a piece of sightreading. Being able to read music is essential, but I’m almost more interested in how quickly they pick something up. I also try to assess what an applicant can offer the choir more generally – will their voice blend well; will they get involved with all the myriad jobs involved in running the choir; how strong is their commitment likely to be, and so on.

You specialise in demanding choral works and songs. What process do you use to make your musical selections?

Balance and variety are everything. If you do too much easy repertoire the choir can lose its edge and colour; occasionally doing really ambitious pieces stretches the singers and brings out the best in them, but it is also satisfying to go back to an old favourite knowing that you can sing it beautifully. I decide most of the programming, but all of our repertoire is discussed regularly by the committee, and sometimes singing at a particular venue can influence our choice. Unaccompanied Renaissance music sounds wonderful in somewhere like Prior Park Chapel or Malmesbury Abbey; whereas you might choose a more jazzy programme for Wiltshire Music Centre, and save your big orchestral occasions – Bach, Mozart, Dvorak – for the wondrous setting of Bath Abbey.

What are the challenges in performing contemporary choral works?

The choir’s founder, Cuthbert Bates, established the choir to perform the great works of J. S. Bach – as did the founding fathers of most of this country’s Bach choirs. There has not been a more inspiring composer; but there is a wealth of other fabulous music to explore. I am a huge admirer of James Macmillan’s music. It is contemporary and technically difficult, but he has a language that can be understood on first hearing. The challenge is mainly perseverance: for the St John Passion in 2011 which we performed in front of James Macmillan every singer had to attend at least 30 hours of rehearsal. We performed it twice – in Wells and Exeter Cathedrals – and were substantially supported by Mulberry, with a grant from the Arts Council to match, which meant that we could afford to have a best-in-class orchestra and all the resources we needed.

What have been the stand-out moments in your time with the choir?

Too numerous to list; that is why I love training and conducting the Bath Bach Choir. Every time the learning process starts to gel and ping – with all the notes perfectly in tune and every voice singing as one – I get shivers down my spine at the beauty of what we (85+1) have achieved together.

We’ve performed in some amazing places around the world on tour – including in Bach’s own church in Leipzig – but every major concert is an incredible new mountain to be climbed. At the moment you reach the peak, with outstanding orchestral playing, inspirational soloists and the choir raising its game to produce thrilling sounds, there is no more wonderful feeling. It’s like flying.

Tell us about some of the high-profile events you have been part of.

At the Queen Mother’s 75th birthday performance we put together a short biography of her life and sang it to Anglican Chant. One of the most exciting high-profile gigs I’ve done was forming and preparing the chorus for the ‘Three Tenors’ concert in the Royal Crescent in 2003. Musically it was not very challenging, but I did enjoy talking to Pavarotti. I also formed a group partly drawn from Bath to record the National Anthem for the Queen’s Christmas Broadcast one year. After 23 takes – including the lesser-known verses and a humming version – we were all hoping that there was something the producers were happy with in the can. It sounded wonderful when it went out on Christmas Day.

Did the choir keep singing during lockdown?

This was an amazing tribute to the leadership of the Bath Bach Choir and its members. I don’t think we missed a single Monday Zoom session. It was initially chaotic, but we got better at it and several members were grateful for the weekly connection as loneliness was a sad side effect. We graduated to recording several ‘virtual choir’ videos which you can see on YouTube; and when we were able to meet again in person, we rehearsed outdoors. I also I took 24 rehearsals of just six people at a time in St Michael’s Without – we were so determined to navigate our way (safely) back to live singing.

Do you enjoy any other genres of music?

I think I can say that I enjoy all genres of music as long as they communicate something fundamental. I particularly like jazz, but don’t always understand it, and I like pop music if it has proper lyrics.

How can a choir performing within an elite classical musical canon stay contemporary and connected with new and younger audiences?

If classical music is performed to a high standard it speaks to all ages. Any younger person who comes through our door is caught up in the essence of choral singing and the fellowship of making harmony together. The challenge for us is to present our music in a way that is engaging and entertaining – that is as important as getting the notes right.

What are the plans for Carols by Candlelight at The Pump Room?

Carols by Candlelight concerts are very special occasions. Started some 60 years ago, the concerts have evolved to include local junior school choirs and outstanding young instrumental soloists from the area, with audience carols that provide me with a lighthearted opportunity to deliver a ‘singing lesson’. This year we are having to be a little restrained; there won’t be any school choirs and although the audience will not be encouraged to sing out lustily, we will be asking them to dust down their percussion skills.

What is your current favourite piece of choral music?

It’s the piece I have spent the last two months living with, week by week, preparing for the performance we gave in Bath Abbey on 30 October – Brahms’s Ein Deutsches Requiem. It is such a profound and moving work; it really speaks to one’s soul, and is both emotionally exhausting and intensely uplifting to perform.

What choral performances do you have scheduled for next year, for your 75th anniversary?

We’re going back to our roots. Our choir was founded in 1947 to perform J. S. Bach’s great B Minor Mass. So the climax of our 75th year will be a performance of this signature work on 5 November in Bath Abbey, with baroque orchestra, Music for Awhile, and a stunning line-up of baroque soloists. We’ll also perform Monteverdi’s scintillating Vespers of 1610 in Bath Abbey on 2 July; and to launch the anniversary year in style, we’re performing Rossini’s extravagant Petite Messe Solennelle (neither little nor solemn) on 26 March in the stunning Italianate church of St Mary and St Nicholas in Wilton, near Salisbury.

Carols by Candlelight 2021 will take place on Thursday 16 December 2021 and Friday 17 December 2021, 7.30pm  at The Pump Room, Bath: tickets are on sale at bathboxoffice.org.uk. For further details of all concerts and events, go to bathbachchoir.org.uk