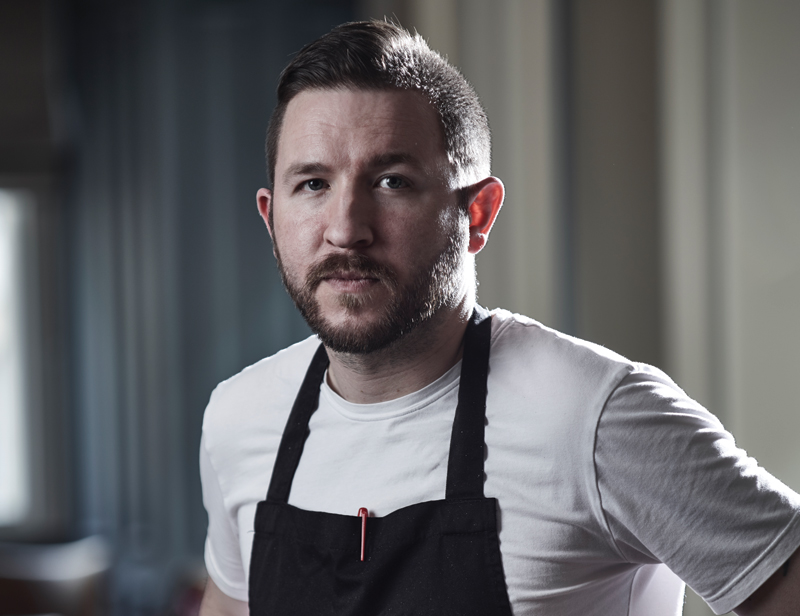 After just two years as head chef at the Gainsborough Bath Spa Hotel’s restaurant, Dan Moon has become the face of fine dining in Bath. Melissa Blease talks to the head chef about his gastronomic achievements and his plans for the future

Dan Moon took to the hob as head chef in the glamorous Gainsborough Bath Spa Hotel’s kitchen in the summer of 2016. Within just a few short months, he’d garnered huge acclaim both locally and nationally, recognised as the chef responsible for upping the Bath fine dining scene ante courtesy of an array of ever-changing menus that totally, utterly engage the senses, served in super-sophisticated surroundings. But Dan’s reputation was set to soar even higher.

In recognition of his culinary flair and increasing popularity, the Gainsborough Bath Spa Hotel unveiled a dining experience named in honour of the man himself in July 2017. Just a few short weeks later, Dan Moon at the Gainsborough Restaurant was awarded 3 AA Rosettes at the glittering AA Hospitality Awards ceremony; at the same time, the hotel itself picked up the Hotel of the Year (England) gong. AA head honchos described Dan’s bouquet as “an honour that distinguishes the consistent excellence of his cuisine along with the restaurant’s dedicated, intuitive service and superb wine list” – good going, eh? 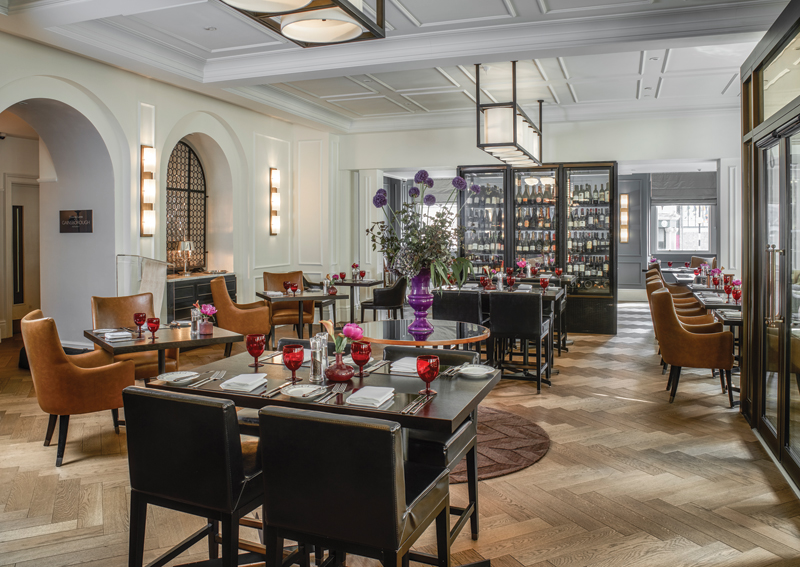 Now it would be easy to assume that a chef with such a suddenly stellar profile may not have kept his feet on the ground in the months that followed. But while Dan may well have stars in his eyes (of which more later), he is as down-to-earth and accessible today as he was when we first turned the spotlight on him on these very pages, many moons (oh okay, a couple of years) ago, when he first arrived at the hotel.

“Having a restaurant in my own name is an incredible honour,” says Dan. “To know that the management rate my abilities and reputation so highly and – most importantly – that the diners in the restaurant like my food makes me feel very, very fortunate indeed. I’m also lucky to have been trusted with an opportunity to steer the restaurant in a new direction. Since the name change last summer, our service and food offering has been completely upgraded and the restaurant experience overall is more accessible. Promotions such as my 2-4-1 lunch offer have made fine dining more affordable, and footfall has started to climb. It’s extremely rewarding to know that the new direction I’ve taken us in has paid off. The name change also helps to differentiate the restaurant from the main hotel, as there’s sometimes a misconception that we only cater for hotel guests, which is most definitely not the case!”

“While Dan’s style could never be described as ‘cosy’, he cleverly avoids that over-cheffy habit of straying away from the realms of common sense”

Indeed it isn’t – and if you’ve been loitering in the shadows of that misconception, you’re seriously missing out on one of Bath’s most fabulous foodie experiences. While Dan’s dishes focus on the kind of pioneering cooking techniques and theatrical presentation that reflect his position as a trailblazer on the modern British culinary scene, his passion for locally sourced, seasonal ingredients is at the very heart of his eponymously named prandial playground. While Dan’s style could never be described as ‘cosy’, he cleverly avoids that over-cheffy habit of straying away from the realms of common sense. So, what’s on the menu at the moment, Dan?

“I’ve woven Asian influences into much of my menu as a kind of nod to our Malaysian owners (YTL Hotels) and I love working with umami,” he says. “I’ve been developing my scallops dish for a while – it’s unrecognisable now to how it looked a year ago, and brings scallops, yuzu, crab and seaweed together on the plate. Another signature dish is my Creedy Carver duck; again, it incorporates the Asian influence in the spring roll, plum, sesame seeds and mouli, but the duck reflects my Exeter roots. And I’m really excited about a new dish that’s coming to the menu soon: chicken ramen as an amuse bouche. But I believe there’s always room for improvement, which is why every dish on the menu is constantly evolving.” 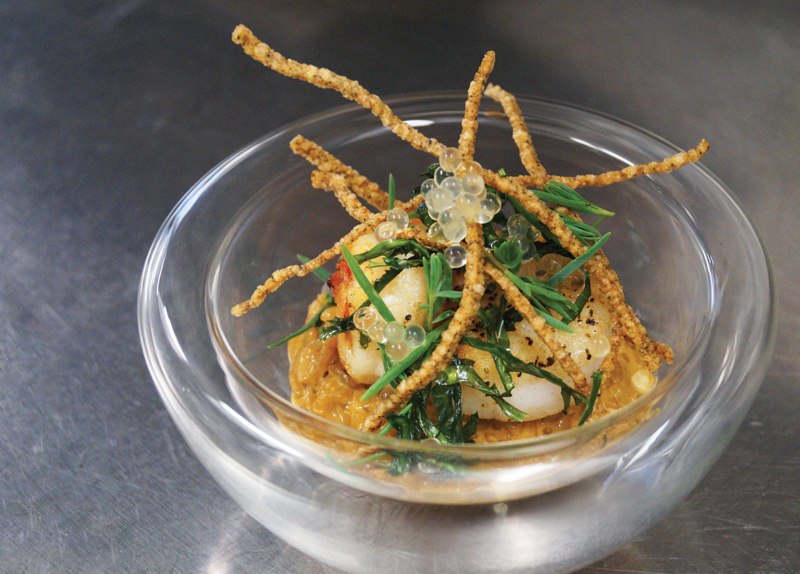 Such a dedicated, hands-on approach, though, can make juggling the work/life balance difficult, especially taking the fact that Dan and his wife Sarah have two small children into account. “Obviously, when it comes to working hours, I work in a challenging industry and that inevitably impacts on family life,” says Dan. “We’re at a crucial point for the restaurant at the moment and I can’t take my foot off the accelerator, so I need to be here as much as possible. I get to see my kids in the morning and after school which is great, but most days I miss their bedtimes, which I really hate. But Sarah’s working hours fit around mine quite well so between us, we manage to give the kids plenty of time. It would be nice to see more of them, of course it would, but that kind of sacrifice comes with the territory I’m on.”

And it’s a territory that could hardly be described as stress-free, even without the needs of a young family to consider. “As head chef of a five-star establishment, the element of pressure related to that role has definitely increased now that my name is above the door,” says Dan. “Every plate my team send out represents me personally as well as the restaurant. The increased custom is brilliant, but it brings additional challenges such as hiring and training extra staff. Oh, and we have a very small, underground kitchen with a dumb waiter that isn’t large enough to send more than a few dishes at a time up to the restaurant, which represents a bit of a nightmare scenario at busy times. And of course, there’s the never-ending pressure of my own high standards to deal with – but that’ll never go away!” 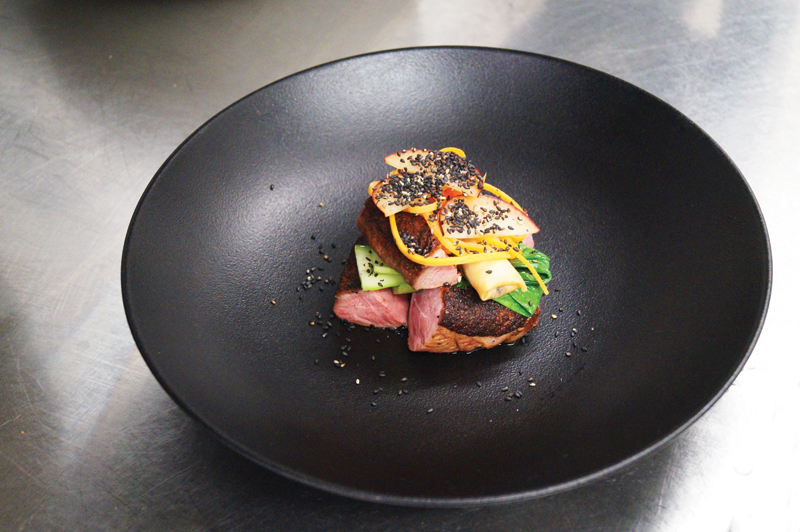 What, not for a moment… such as a moment in the future, for example, when the Michelin men may very well sprinkle stardust over his restaurant? “Okay, yes, after the Rosettes, my next goal is a Michelin star,” Dan admits. “Many chefs won’t say this, but awards really are so important. Not only does an award prove to me that my food is among the best, but it sets a benchmark for continued progress – this industry doesn’t stand still for long, and we constantly need to be upping our game.

“Local awards are particularly important to me as they reflect what our regular diners think of us. But the most important thing is that we continue to create experiences for people. When people come to a fine dining restaurant, it’s often to celebrate a special occasion, and we want to give them a meal to remember – not just the food, but the service, the atmosphere, and all the thoughtful little touches that make it memorable. Whether they’re joining us for an indulgent afternoon tea or a seven-course tasting menu experience, I want my diners to feel special with every bite they take.”

As he consistently strives for perfection, who and what motivates Dan? He cites Gareth Ward from Ynyshir Hall (who achieved 5 AA Rosettes last year when Dan was awarded his triple) as the chef he’d most like to cook for. He also tells me that watching his staff team develop is a great source of satisfaction, and describes getting positive feedback from customers at the end of service as “the best buzz in the world.” But ultimately, there’s only one true love of Dan’s working life. “I get immense pleasure out of developing dishes – as someone once said, a piece of art is never finished, only abandoned,” says Dan. “My dishes are like paintings to me; the plates are the canvas and the food is the colour.” Shine on, Daniel Moon – shine on.­­­