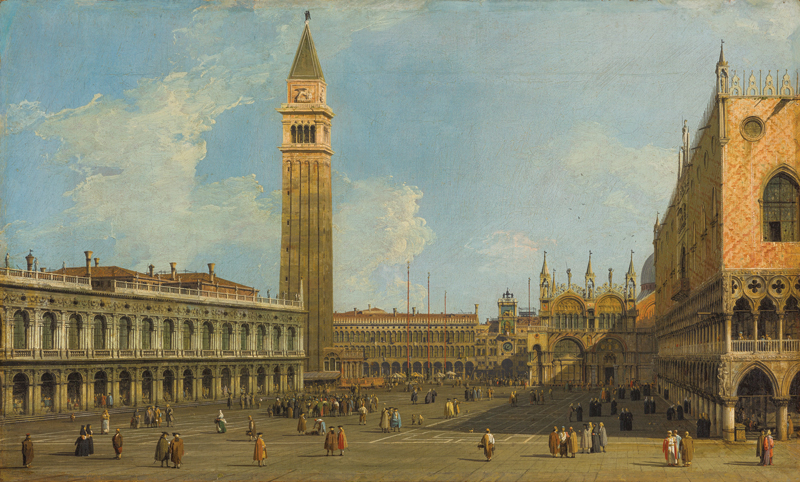 The most important set of paintings of Venice by Canaletto is coming to the Holburne this year. Emma Clegg spoke to curator Monserrat Pis Marcos about the collection of 23 paintings, which bring to life the lure of 18th-century Venice

In 1731, the 4th Duke of Bedford commissioned 24 paintings of Venice from Antonio Canaletto. The Duke, then Lord John Russell, was in Venice on the Grand Tour in 1731, and would have met Joseph Smith, Canaletto’s agent, a Venetian resident and later British consul there. Lord John Russell was evidently attracted by Canaletto’s burgeoning reputation for producing precise and atmospheric views of the Italian city’s most iconic views and landmarks.

When the 24 paintings were delivered they were displayed in the dining room at Woburn Abbey in Bedfordshire, the family seat of the Duke of Bedford. The family have never parted with them, until now. That’s because 23 of the 24 paintings are being shown at the Holburne Museum in Bath from January to September 2021. It’s one of the rare occasions that any of the successive Dukes of Bedford have lent the set of paintings – which form part of one of world’s most important private art collections – since they arrived in Britain from Canaletto in the 1730s.

Canaletto was an Italian topographical painter whose masterful expression of atmosphere in his detailed views (vedute) of Venice influenced succeeding generations of landscape artists. Holburne curator Monserrat Pis Marcos explains the importance of the collection: “Canaletto painted several sets of paintings of Venice but not all of them have been kept together. The collection has belonged to the Bedford family since they were painted. So it hasn’t been taken apart, it hasn’t been sold, it’s not in different collections, and that’s what makes this set quite unique.

“The paintings include classic views, some of them iconic. Others he painted very rarely or only once. Some of the views are intriguing, leaving you wondering why he would choose them. So for instance there’s the view of the Arsenale, the shipyard of Venice, which epitomised the commercial and military power of the Republic. The way he depicted this is the only one known of.”

Other paintings show the familiar scenes that we all associate with Venice. Out of the 24 paintings there are two that are very large and these depict festivities within the Venetian calendar. One of these is the painting of the Ascension Day, the Festa della Sensa, a feast day for the Republic of Venice. This painting is very well known, partly because Canaletto painted several versions of it. This day commemorates two important events for the Republic: 9 May 1000ad when Doge Pietro II Orseolo helped Dalmatian inhabitants threatened by the Slavs, and the second, connected to 1177ad, when Venice was ruled by Doge Sebastiano Ziani. At that time, Pope Alexander III and Emperor Federico Barbarossa met in Venice and stipulated a peace treaty. The Wedding Ceremony of the Sea was held in remembrance of this event each year, and, from that date each year, the Doge would sail on his state barge to San Pietro di Castello where the Bishop would be on board a gilt-edged boat, waiting to bless him. To highlight the dominion of the Serenissima (Republic of Venice) over the sea, the feast ended with the Doge throwing a gold ring into the water in the lagoon inlet.

“The throwing of the gold ring into the sea was a re-enactment of their history as a maritime nation and their dominion over the sea. These views were very popular with tourists and they represented the power and wealth of Venice,” explains Monserrat.

What was Canaletto’s inspiration for painting so many views of Venice? “There was a market at the time for Venetian vistas. So Canaletto found this niche and made good use of it. The idea of topographical vistas came to the fore at the end of the 17th century and the artists that came after this, including Canaletto, developed the notion of Venetian vista, which was at its height in the 18th century. It became very popular, especially with rich foreigners on their Grand Tour, and it’s quite logical if you think about it – like having a postcard to remember something that’s unusual to you.”

Monserrat explains that in terms of his personal character and motivations, Canaletto remains a mystery. “Canaletto is quite an obscure figure. His paintings are really well known visually but if you want to find out about his personal life and who he really was, there is hardly anything there. So it’s hard to be specific about his motivation, beyond the fact that he wanted to make a living out of his painting. I’m pretty sure, though, that if Canaletto hadn’t loved Venice he wouldn’t have painted it as much as he did.”

Canaletto was known for drawing from life and Monserrat explains that his sketchbooks informed all his paintings. “Drawings from his sketchbook at the Galleria dell’Accademia in Venice will be included in the catalogue. The sketches were usually drawn from life, so he would sit on a boat or on the side of a palazzo or by the waterfront and sketch what was in front of him.”

His compositions, however, were frequently modified. “He was aware that his paintings had to be aesthetically pleasing and he was very accurate in many aspects. But he also knew that if the canal had a bit too much of a bend then it was acceptable to open up the perspective a little bit. And he would do that usually drawing from different views he had taken from life. So he wasn’t inventing a new reality. He would make the pieces of the puzzle join in a different way, always referring to that reality.”

The paintings at Woburn Abbey have been displayed differently over the years, according to the preference of the keepers of the collection, so the Holburne had no specific model to follow. “Considering there wasn’t a right or wrong order in terms of the way they were laid out at Woburn Abbey we were free to hang the paintings however we wished. We were always keen to ensure that all the paintings were at eye level because at the Abbey they are displayed three high.

“We decided to display the exhibition topographically. So when you enter the exhibition you’ll find a view of the Bacino di San Marco from the sea. When you went to Venice in this era you would arrive by the sea, so you begin from there and then you travel up the canal. You go upwards towards the Rialto Bridge in that first section. And then return in the second section. So we’re following the route along the Grand Canal.”

You’ll be able to follow Canaletto’s views of the Grand Canal at the Holburne when the museum opens once again.

Main image: The Piazzetta di San Marco, with the Libreria Vecchia on the left