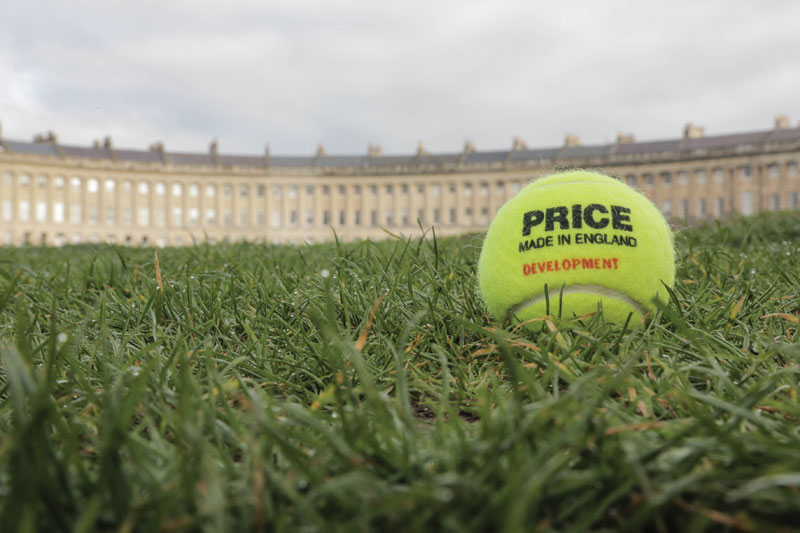 Price of Bath has been manufacturing tennis balls for three generations of the same family. Georgette McCready visited the factory at its busiest period, preparing for Wimbledon

As you settle down to watch some of the best tennis players in the world, courtesy of Wimbledon (which runs from Monday 3 to Sunday 16 July), spare a thought for the people who make tennis balls. I don’t suppose you’ve ever given much thought to how these furry fabric covered orbs, with their distinctive double stripe, get put together. Since the first India rubber balls were developed in the 1850s, inventors have applied themselves to improving on existing models.

You could fly out to the Far East to see tennis ball manufacturing on a grand automated scale, bouncing out thousands upon thousands of the sporty little blighters. Or you could travel just down the A4 from Bath to Box to the factory of the family-run business Price of Bath which has been making tennis balls for three generations.

How can a small scale operation, with just 14 members of staff, compete with the Far East market, you may well ask? The Price family have learned the hard way how to adapt and survive.

They produce tennis balls in a rainbow of colours and adorned with logos for all kinds of organisations, from Stella Artois to Ralph Lauren. Customers can choose any colour they like, there’s even a black bespoke set of balls with a smart gold logo. Packages of all sizes are sent out daily all over the world.

Louise, the latest in the Price dynasty, leads me through the rabbit warren of workshops that have served the business for years. There are dark stains of years of rubber on the floors of these old worksheds, the yards of pipes lagged against extremes of heat and cold. She opens a door on to a shed occupied by an enormous steam driven boiler, which almost seems to be breathing and which is referred to darkly as The Beast. It’s all fascinating and a bit archaic, a hark back to Britain’s industrial past when people actually got their hands dirty and had to concentrate on the skilled task in hand because no computer was doing their measuring, or thinking, for them.

And there, as if on cue, is Derek Price, the 86-year-old head of the business, overalled up, his hands covered in oil as he fixes a pressing machine in one of the workshops. He admits that there’s a lot of specialist machinery on the site, bought from places such as Avon Rubber when it decommissioned its plant, that he’s kept mothballed for years – but which could be brought back into use if the market calls for it.

Derek’s father Joseph Price, brought his family to Box in 1936, when the business at the foot of Quarry Hill specialised in re-treading rubber tyres for vehicles. Derek started helping out in the yard and the workshops while he was still at school and to this day he lives and breathes rubber. A pile of notebooks in his office (“we’re up to 32 notebooks full of ideas” observes daughter Louise) is filled with his ideas for new developments and inventions.

Father and daughter are united in their passion for keeping the family business well and truly afloat. The rubber (which is imported in heavy, solid brown bales from Malaysia) is mixed with other ingredients for different types of ball, whether it be tennis, squash, racket or child-friendly. All the mixes are as precise as Mary Berry’s cake recipes and all are rigorously tested in the quality control laboratory to ensure the right bounce, texture and longevity of service for sportspeople.

Over the decades Derek’s expertise has been useful to such august bodies as the Lawn Tennis Association in the development of balls that play differently, according to the needs of the players.

In the 1960s Derek’s business employed around 100 people in Box. The milling machines and the presses barely rested, their rhythmic thumping of the engines a soothing backdrop to Louise’s childhood. Just as the old days of Stothert and Pitt or the Bath Press, this was the era of highly skilled workers operating heavy-duty pieces of equipment. But one day, in the 1980s, the exports to America – where Price’s customers for the tennis balls included Macys and Walmart – were hijacked by a new rival market.

“We got a Telex,” recalls Derek, “to say we’d need to cut our prices by 20 or 30 per cent to keep our contracts. There was now a market in the Far East churning out balls far cheaper than we could ever make them. It was a shame I’d just invested in expensive new machinery.”

In 1969 Derek had acquired a second site in Box, at Station Yard behind the Northey Arms pub, it wasn’t until 2017 that his plan to bring the whole manufacturing, marketing and administrative process on to one site – away from the centre of Box – is going to be realised. Over the coming 12 months the old machines will be moved to the new site and the administrative staff will give up their desks in what used to be the bedrooms of the Price family home – a pretty challenging environment for the smooth running of a 21st century business – and move to purpose built premises.

Louise, who gave up her career in teaching four years ago to come and work with the family business, explains how Price has managed to adapt and to thrive.“The first thing we did was enter the major online market places, such as Amazon and eBay. That made a huge difference to sales. We’ve also specialised in personalised tennis balls and can meet small orders quickly in a way that the big Far East factories can’t. We also ensure that our balls smell nice – customers don’t want tennis balls that reek of petrol. When we move to the new site all the processes can be streamlined and we’ll save a lot of time.”

Price can use Pantone colours to get the exact shades that customers want and can meet small orders – such as the Bath tennis coach who wanted balls with her name printed on them – or large orders, such as the big tennis tournaments all round the world. In the run-up to Wimbledon the factory is producing 6,000 balls a week.

The manufacturing process is an involved business, with many stages, from mixing and stretching the rubber, to shaping it into moulds, gluing the halves together and finally sending the milled balls out to a team of home workers who painstakingly smooth the fabric round the balls. But, although it looks laborious, Louise tells me the step-by-step process for making sports balls is the same the world over whatever scale it happens to be on.

Price of Bath has just launched its new bright and user-friendly website, so individual and corporate customers can order the product they want directly. There’s a facility for people to submit their own logos to be printed on the balls. Schools and clubs in Bath are already enjoying this option. The latest excitement at Price is, that after years of research, Derek and Louise have perfected a Union Jack flag ball, which is about to go on the market.

Louise, who has children too young to have decided whether they’ll enter the family business, says crucial lessons have been learned over the last eight decades. “We know that the key to surviving is knowing exactly what our customers want, keeping an eye on what our rivals might be up to next and another eye on where our next customers are going to come from.”