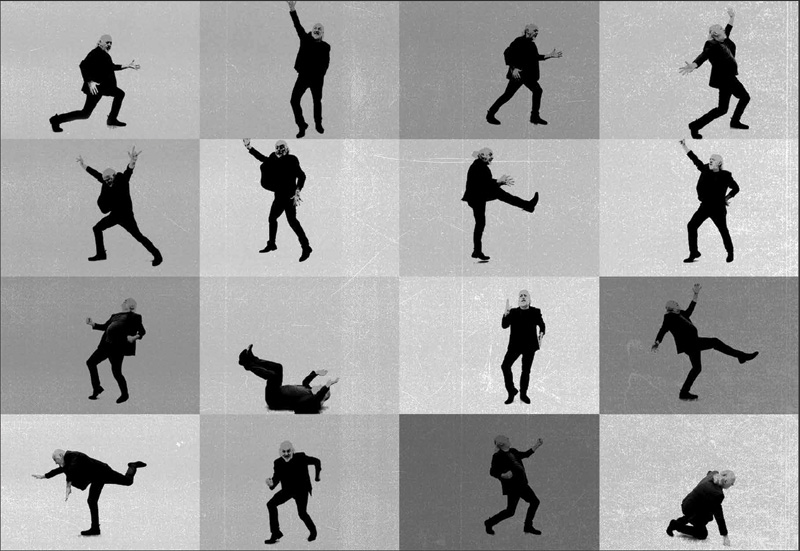 Bill Bailey: The caretaker of the dance

This West Country boy might have settled down amid the bright lights of London, but comedian, musician and actor Bill Bailey still belongs to Bath. He’s hitting the headlines at the moment, part of the Strictly Come Dancing cast for 2020, and he has a new book out, Bill Bailey’s Remarkable Guide to Happiness. Don’t worry, there’s no ‘this is how to be a better person’ advice here. From paddle-boarding down the Thames in a Santa hat, to wild swimming in a glacial river, Bill ruminates on the exhilaration of the outdoors, as well as the quieter pleasures of clearing out your moth-eaten grey t-shirts. We’ve managed to get our hands on the chapter on Dancing – and what better way to embrace that feeling of happy? Bill has even drawn some pictures specially

Sometimes you just need to cut loose, cut a rug, let yourself go a little, and whether it’s throwing shapes at the wedding/club/campsite, or just having a quiet boogie on your own, dancing is an excellent way of doing that. ‘Alexa, play “Get Up Offa that Thing”.’

Just for the avoidance of doubt, I am no lord of the dance, not even baronet of the dance, more caretaker of the dance. My signature move is a kind of elegant side-shuffle, a manoeuvre as deft as it is ancient, a shimmy such as a crab might make as it rears up on its hind legs. This is enhanced by flailing alternate arms and, on occasion, legs. It’s rooted in modern jazz, tap and contemporary Klingon. I have just named it the Tango Nebula. Whether it follows any sort of pattern I have no idea, but I always feel better after I’ve executed it.

My most recent outing as a dance floor maven was at a birthday party in a little town in the south of France, where we ate en plein air in a courtyard restaurant. After dinner, the tables were cleared and moved back to make space for the dancing. The familiarity of the music and the company of friends uncorked a rare vintage of a night where songs were sung with full-throated intensity and lyrics were interpreted with a literal precision not seen since the days of Pan’s People. The Nebula was given a full workout on the dance floor. Well, in this case, not so much a floor, more a kind of fine white gravel popular in France for the game of boules. In fact, I would say with hindsight that this space should have been exclusively used for boules.

I wouldn’t be surprised if, after that evening, the patron had put up a sign, prominently displayed with a stern warning: Interdit de Danser! Seulement pour les Boules. Instead the gravel-kicking, arm-flailing hoedown morphed into an inevitable and ill-advised conga line, with much cheering and whistling as the reluctant patron was coerced into the fray.

By the end of the night, my shirt, trousers and blue suede shoes were coated in that fine white powder, a flashback to Elvis’s later years. They resembled prop shoes used in a film drama where the protagonist has been kidnapped in city clothes, kept hostage in a remote shack out in the desert, but has then somehow escaped and is now being pursued down a rocky gulch, and, acting his socks off throughout a hellish montage of dry riverbed/ sun beating down/circling vultures, has finally stumbled into a flyblown town near the Mexican border, his face all cracked lips and sunburn, croaking, ‘Agua, agua.’ Exactly like that.

I came second in a limbo-dancing competition once. Yes, I know you’re sceptical, but it’s true. It was during a charity fundraiser for a children’s hospital, and I was a bit younger then and more bendy, but still. Each round saw the field whittled down as various denizens of the great and good fell away, until it was only me, Lionel Blair and Sinitta. After a close call I just scraped under the bar. Next up was Sinitta, but she tipped the bar off at the last second, so it was down to me and Lionel. His superior technique, honed by years of tap-dancing and charades eventually prevailed, and he took the honours, but I ran him very close.

As you know by now, I like finding out about the mental and physical benefits of my chosen routes to happiness. There are the obvious health benefits to The Dance, like improved heart and lungs, increased muscular strength, endurance and motor fitness, and increased aerobic fitness, if you’re into that. Not to mention greater attractiveness to others, less embarrassment at family gatherings and generally a greater awareness of your place in the universe. OK,

I started to make them up there, but you get the gist. It’s an ancient thing, dance, it bonds us together, it lets us forget our daily troubles for a short while.

When I was a teenager, I had ballroom dancing lessons. There was a dance school across the road from our house and I learned the waltz, the foxtrot and the quickstep. The teacher was a tiny, petite woman with huge passion for The Dance. It was a marvellous and quite surreal experience to whirl around a dance hall with this ball of terpsichorean energy. Bless her and all those she must have enlightened to her world. I can see the appeal of the foxtrot, the tango and the rhumba, the formal nature of it all, the practised moves, the precision, but it’s not really me.

I am more of a free-form mischief dancer, a Loki of the Lindy Hop. I remember one night in Madrid, it was just the three of us – me, the wife and the teenage son – pogo-ing, headbanging and generally arsing about at a Foo Fighters concert. It remains one of my most cherished memories. It’s the best fun to dance like no one’s looking among a crowd full of people.