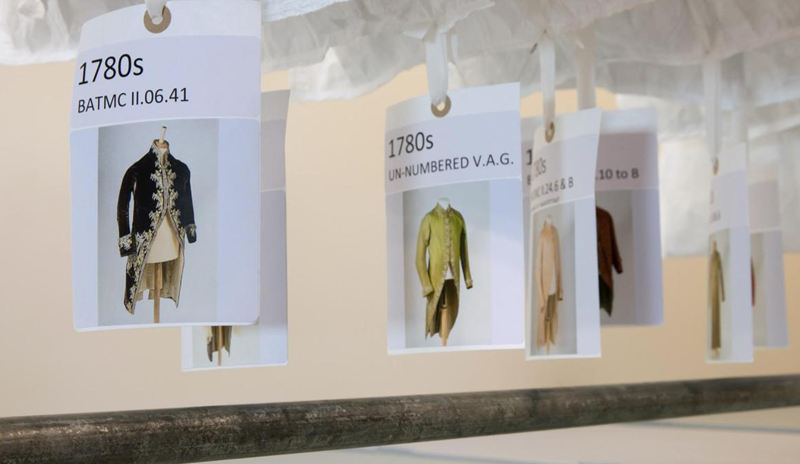 Behind closed wardrobe doors – backstage at the Fashion Museum

Away from the glass cabinets of the Fashion Museum’s displays are thousands of items hidden away from public view. Nonetheless, in order to make these pieces more accessible to everyone, the museum is now allowing small groups of the public exclusive access to go behind the scenes and see these exquisite items for themselves.

From beautifully detailed Jacobean gloves to a dress worn by Queen Victoria; Regency waistcoats from the time of Jane Austen to a couture jacket worn by Vivien Leigh, the Fashion Museum in Bath has an extraordinarily vast collection at its fingertips.

Holding over 100,000 items of clothing and accessories in its archives, the museum is considered to be in the top 10 fashion museums in the world. Opened in 1963, its collection demonstrates the diverse nature of fashion and people’s attitudes towards clothing over the centuries. And while you can wander around the latest exhibition – A History of Fashion in 100 Objects – the museum is also offering a special glimpse into what goes on behind the scenes in the archives.

Backstage tours are available to groups of up to four, in which you are taken around the archives by one of the museum’s experts and shown some of the fashionable delights that are kept behind closed doors. I was lucky enough to be taken around the archives by Rosemary Harden, the museum’s curator, on a recent visit. Here I reveal just some of the wonders you will witness on one of the tours . . .

After arriving at the museum and being greeted by your tour guide, you are taken through a side door, which isn’t open to the public. First stop is what used to be the flat of the museum’s caretaker in the 1960s – you even pass the ornate doorbell at the bottom of the stairs that the museum’s workers would have once used to summon the caretaker. This flat is now one of the numerous storage areas, with every shelf, corner and box being used to house items in the collection.

As Rosemary opened the tall doors to one of the storerooms, a musty smell instantly surrounded us – that kind of old smell that makes historians such as myself excited in anticipation at the treasures we are about to be presented with. As I turned around, boxes containing delicate handmade gloves dating from the 17th century and rails of 18th century waistcoats encircled us.

With great care Rosemary took one of the “boxes of delight”, as she called them, and opened it to display a pair of gloves dating from the 1660s – it was just like excitedly unwrapping a present at Christmas as a child. There, under the layers of material protecting it, was a beautiful pair of cream gloves with delicate green stitching running along each seam. You could see the shape of each individual finger, which would have been carefully cut and sewn to fit the owner’s hands at the time. The gloves were so elegant and delicate – it was extraordinary to be able to see them up so close. Items such as these don’t only show how people once wore items of clothing, but by studying the small and intricate stitches and design they also reveal how they were so carefully made. This is true craftsmanship at its finest.

As we turned to the waistcoats, all lined up with precision on the rail, the fine metal threads adorning each item sparkled in the light. Each waistcoat hangs on a specific style of coat hanger. Rosemary tells me the museum has around 10 different types of coat hanger so that they can find the right style to suit each item as if a piece is hung on the wrong kind of hanger, it risks changing the shape of the material and permanently damaging it.

Preserving these rare items is at the forefront of what Rosemary and her colleagues strive to do at the museum. Protecting centuries-old clothing is a challenging task and minimising the risk of damage is fundamental every time the employees handle such items. There are four key areas that the museum considers vital to monitor in order to conserve the clothing – light, relative humidity (they use thermal hydrographs in each storeroom to monitor this), pests (such as moths and beetles) and handling (gloves are a necessity).

On entering the next storeroom, I walked down the aisle and found myself in a world of deep burgundy velvet, gold sequins, silver metal thread, pale pink silks, feathers and an abundance of beads. I was well and truly transported to the 1920s. No two items were the same, and each piece oozed elegance and style. It was a feast for the eyes.

And while you would assume that the museum only holds couture and designer pieces, the collection does in fact include items from department stores from the 20th century. This makes the collection even more significant, as it charts the diversity of fashion over the years and allows us to observe how the top designers of the day influenced fashion on the high street.

After delving into the hat boxes of couture items from the 20th century by the likes of Dior, and walking through the shoe collection from the 1930s, we came to a storeroom filled with rails of menswear from the floor to the high ceiling. In here are kept the enormous collections of clothes worn by fashion enthusiast Mark Read and art historian Sir Roy Strong – two men whose wardrobes epitomise modern fashion.

After moving through the backstairs, adorned by vintage covers of Vogue, we came to the final storeroom on our tour. Large boxes of Victorian dresses and 18th century men’s jackets on hangers, covered in protective material, filled the room. Every item in the collection has a clear photograph, name and reference number attached to it, and this reference system is fundamental for recording the museum’s catalogue of items.

Every Thursday the museum allows visitors to book a space in the Study Facilities room where you can choose items from the archives and have them brought to you to see them up close. The archives are regularly used by costume designers in theatre, film and television for inspiration for their designs and to make sure they are creating the most authentic pieces possible. You don’t have to be a student or academic to book an appointment. To book email: fashion_enquiries@bathnes.gov.uk. This is a very popular service, so it is recommended you book well in advance.

Backstage tours are advertised online by the Fashion Museum and Bath Box Office, although private tours can be arranged at a time to suit visitors by emailing: fashion_enquiries@bathnes.gov.uk. There is a maximum capacity of four people per tour, and it lasts approximately an hour. Tickets are £8 per person. Attendees must be comfortable climbing stairs as there is no disabled access. To find out more, visit: fashionmuseum.co.uk or call 01225 477789.