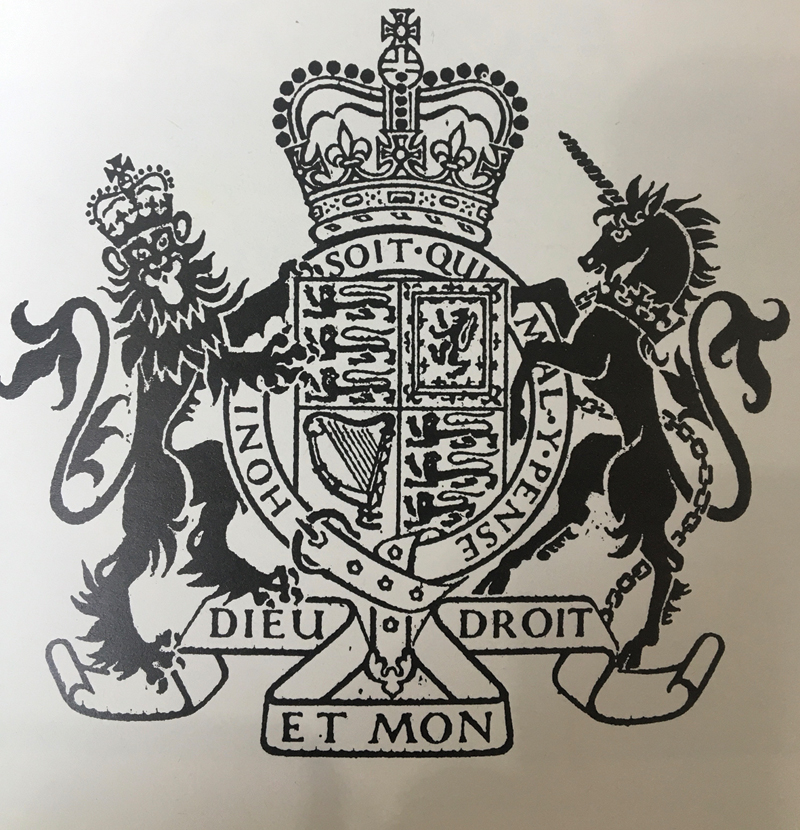 Beau Nash: hidden in the centre of Bath

Walking down Milsom Street, looking up, you will have noticed the handsomely carved Royal Coat of Arms. This Royal badge is ubiquitous, on our tax demands, civic buildings, above shop doors, on lamp posts and on all our notes and coins.

We all know about the English lions all over the crest and shield. The Scottish unicorn is too obvious to miss, along with the Scottish rampant lion in the top right corner and the Irish harp in the bottom left quarter of the shield.

What might be less obvious are the more ancient, hidden symbols of England’s right to rule over France. The fleur de lis, the Royal badge of France, is still a feature of the Royal crown and used to be part of the shield too, but there are other, much less obvious signs asserting England’s claim to the French crown.

The form of the Garter collar surrounding the arms, contrary to popular legend, has nothing to do with the Countess of Salisbury’s stockings, a good story for another day. Published here for the very first time, I can reveal that this garter ribbon actually represents the kind of strap fastening once used by knights to secure armour and is directly copied from a piece of jewellery which belonged to Edward III’s wife.

The Garter motto ‘Honi soit qui mal y pense’ which roughly translates as ‘shame on those who think badly of it’, refers to Edward III’s claims of empire. Edward established the Order of the Garter in 1348 for pragmatic reasons. As Don Corleone wisely put it, ‘keep your friends close and your enemies closer’. A select band of no more than 24 holders could wear the order, this no doubt helped to keep them loyal.

A peaceful England was required before France could be conquered. The Garter collar design is taken from an ancient fermail – old French for buckle – mentioned in the will of John of Gaunt and left to his son Henry IV. In his will Gaunt describes the gold fermail as being bequeathed to him by his mother, Philippa of Hainault, wife of Edward III, who received it in turn from her mother Joan de Valois, granddaughter of the King of France.

The fermail was described as having ‘the name of our lord on each piece’. This name being Sanctus Sanctus, then commonly abbreviated to simple S’s. The famously devout Philippa also had S’s embroidered on most of her bedsheets, curtains and robes perhaps also in memory of her mother.

I only stumbled on this piece of information by accident when searching google books using old spellings of the term ‘Collar of Esses’, the name given to the livery collars given out by John of Gaunt to his supporters in the same way as his father had given garter collars. Gaunt’s collar went on to be the badge of office for Royal Heralds, Lord Chancellors and Lord Chief Justices, and is still in use today.

The very first depiction of esses as a collar is on a bust in Southwell Minster in Nottinghamshire. The bust was for years thought to be of Henry IV. Even though it looked just like Edward III historians were convinced that since it was the livery of John of Gaunt the bust had to be his son Henry.

The collar around Thomas More’s neck, C.1520, the badge of office of the Lord Chancellor, has the usual string of S’s together with a Tudor triple rose pendant.

Next to the rose are 2 portcullises which Henry VII co-opted from the Beaufort family’s arms to enhance his royal pedigree. Margaret Beaufort, Henry’s mother, was a direct descendant of Edward III. Her Majesty’s Revenue & Customs now use the same slightly sinister portcullis as their logo.

If you look carefully you will notice that the portcullises both have half a buckle oddly stuck to the top, a last vestige of the original fermail from which all of these Royal collars descend.