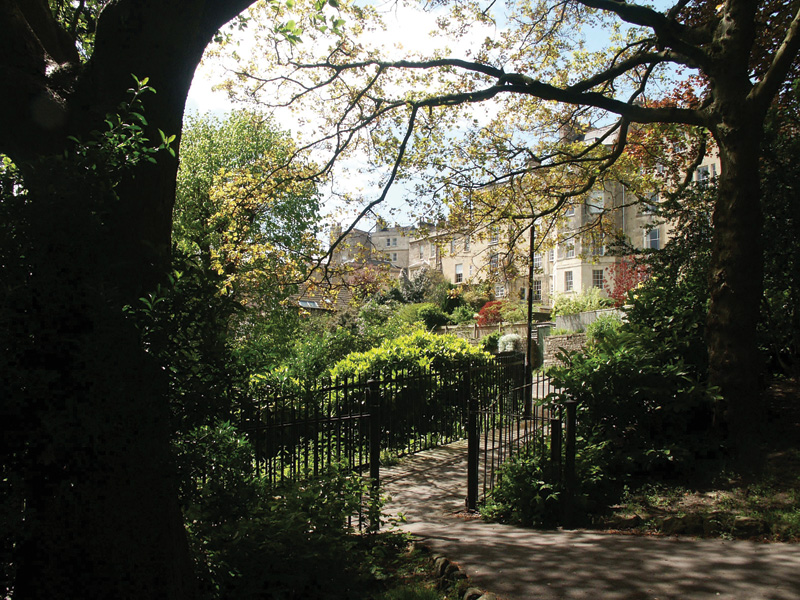 One defining memory of lockdown is the peace, the sound of the trees rustling in the breeze and the birds proclaiming their presence in song, as if exuberantly surprised by the sudden lack of competition. For those with the time to walk, we became aware of how our city is full of green corners, and discovered some that we hadn’t encountered before, says Andrew Swift

Bath’s parks have come into their own in recent months. From places where people escaped outdoors for a few precious moments in the early days of lockdown, they now seem busier than ever, full of strolling couples, children playing and socially distanced groups perched on camping chairs, meeting up after long weeks of isolation. Walking through the parks on these warm, high summer evenings, those halcyon scenes of Parisian park-goers so beloved of the Impressionists spring unbidden to mind.

In the late 19th and early 20th centuries, when Bath’s Georgian architecture did not enjoy the vogue it does today, the city’s parks were the main attraction for many visitors. Grandest of all has always been Royal Victoria Park. Opened by the future Queen Victoria in 1830 and one of the earliest municipal parks in the country, it was conceived on a monumental scale, with urns and vases lining its carriage drives, an obelisk guarded by lions and a magnificent collection of rare trees.

Although best known for its rolling parkland, visitors to the park can also explore the winding paths of one of the finest botanical gardens in the west country or the hidden world of the Great Dell, an old quarry transformed into an arboretum, with an elevated walkway and a colossal bust of Jupiter.

At the other end of the city is Sydney Gardens. When it opened in 1795, it was a lively entertainment venue, with the price of admission deterring all but the well-to-do. The labyrinths, follies and supper boxes which enchanted early visitors have long gone, but you can still stroll its matchless lawns and look down on the canal from delicate chinoiserie bridges. A similar bridge also provides a grandstand view of Brunel’s Great Western Railway, which was driven through the gardens somewhat later.

A short distance away is Henrietta Park, with wide lawns, trees every bit as rare as those in Royal Victoria Park and a sensory garden providing a hidden oasis just minutes from the hubbub of the city.

Hedgemead Park, on a steeply sloping site at the far end of Walcot Street is a very different proposition. This is a park that came about by accident – or rather a series of accidents. The rows of Georgian terraces that once stood here were hurriedly abandoned in the late 19th century when the land gave way beneath them. After they had been cleared away, the only option, once the ground had been stabilised, was to create the splendidly atmospheric – and occasionally vertiginous – park you see today.

Nearby, at Walcot Gate, is one of those green spaces which the city abounds in, but which few discover. This large field, sweeping down to the river, hidden behind a bank of trees, was part of a cemetery which closed in 1855 and was later converted to a playground for a nearby school. The school has been converted to flats, but this hidden place still survives.

Another old cemetery can be found across the river, on Bathwick Street, although this one is the real deal. Dominated by the ruined shell of a mortuary chapel, with blocked-up Gothic archways, a Roman coffin built into a wall and signs identifying the occupants of some of the more elaborate tombs, this is one of the city’s most atmospheric and wildlife-rich hidden corners.

A little further out of town, screened from the London Road by grand terraces, are Kensington Meadows, which partly cover the site of another Georgian pleasure garden. Last year, as part of an improvement project, hundreds of trees were planted here and pockets of wild meadowland created. For many, though, the highlight is the riverside path, winding alongside the Avon, where it is possible to imagine yourself in the heart of the country.

West of the city, another riverside path, which has seen a regreening in recent months as part of the North Quays project, leads to a chain of open spaces – Green Park, the wide lawns in front of Norfolk Crescent, and, on the other side of Victoria footbridge, Bath’s newest park, Elizabeth Park, which opened last July.

If you’re prepared to venture a little further, less than half an hour’s walk in almost any direction will take you from the heart of the city to wooded hills and secluded combes that have changed little since the eighteenth century.

Most of the open spaces south of the city are owned by the National Trust – wildflower-rich meadows, springs gushing from marshy hollows, wild woods, abandoned quarries dug by the Romans – and a succession of spectacular views. Although the paths and tracks leading through this glorious landscape are usually busy with walkers, in the early days of lockdown they were eerily quiet, looking out over a silent city, with the loudest sound that of birdsong.

As restrictions have eased, though, the walkers have returned. One of the easiest ways to access the National Trust-owned land is to head out of town past Sydney Gardens, turn right up North Road, and, just past King Edward’s School, go through a gate on the left to follow a path uphill. The large field to your right – if you head to the top of it – commands probably the most extensive panorama of the hills girdling the city. If you carry on up the path, though, and, just after passing a bench, go through a kissing gate on the right, you will find yourself in Bathwick Wood on the Skyline path. Here, a right turn leads to Sham Castle, while a left turn leads past old quarries up onto Bathampton Down, littered with traces of iron age settlements.

Alternatively, head up Bathwick Hill, turn right into Bathwick Fields and follow a track through the fields before dropping down to Smallcombe Vale. If you walk up through Smallcombe Cemetery, you will come to Smallcombe Wood, the only surviving tract of ancient woodland in Bath. After making a circuit of the wood, a gate leads back through more fields to Smallcombe Vale, from where a lane leads down to Widcombe.

Smallcombe may be Bath’s oldest wood; the newest can be found high on its northern slopes. Primrose Hill Community Woodland was established in 2000 on 24 acres of meadowland. Over 24,000 native trees have been planted, creating an important wildlife habitat, and it is astonishing how much has been achieved in just 20 years. It can be found at the end of Fonthill Road, off Lansdown Road (BA1 5RH).

Another wood that deserves to be better known is the curiously named Tumps, which is accessible from the Odd Down Sports Ground car park on Chelwood Drive, off Bloomfield Road (BA2 2PR). It lies on the site of an iron age hillfort which was largely destroyed by quarrying in the 18th century. This makes for a challenging walk, and explains its name – tumps is an old word for hillocks or uneven ground. For distant views of the city from an unusual angle, though, and some seriously contorted terrain, it is well worth a visit.

This is just a small selection of the places waiting to be discovered. Bath has an extraordinarily rich variety of parks and green spaces which, in the past few months, have come to be cherished more than ever. They will undoubtedly continue to be a priceless resource in the uncertain times ahead. n

A caveat – while parks are generally safe, woods need to be treated with respect. Many of those around Bath have steep, muddy and slippery sections, with numerous trip hazards. They are also best avoided in high winds. Trees are now in full leaf, and, with ash dieback having taken hold, falling trees are an increased hazard. On one stormy day in June, two large ashes fell near the Skyline path, one blocking a flight of steps used by large numbers of walkers.

A new and fully revised edition of Andrew Swift’s On Foot in Bath, with over 200 new photographs, has just been published. He has also written Country Walks from Bath, which explores more of the countryside around the city. Both are available from bookshops or direct from akemanpress.com